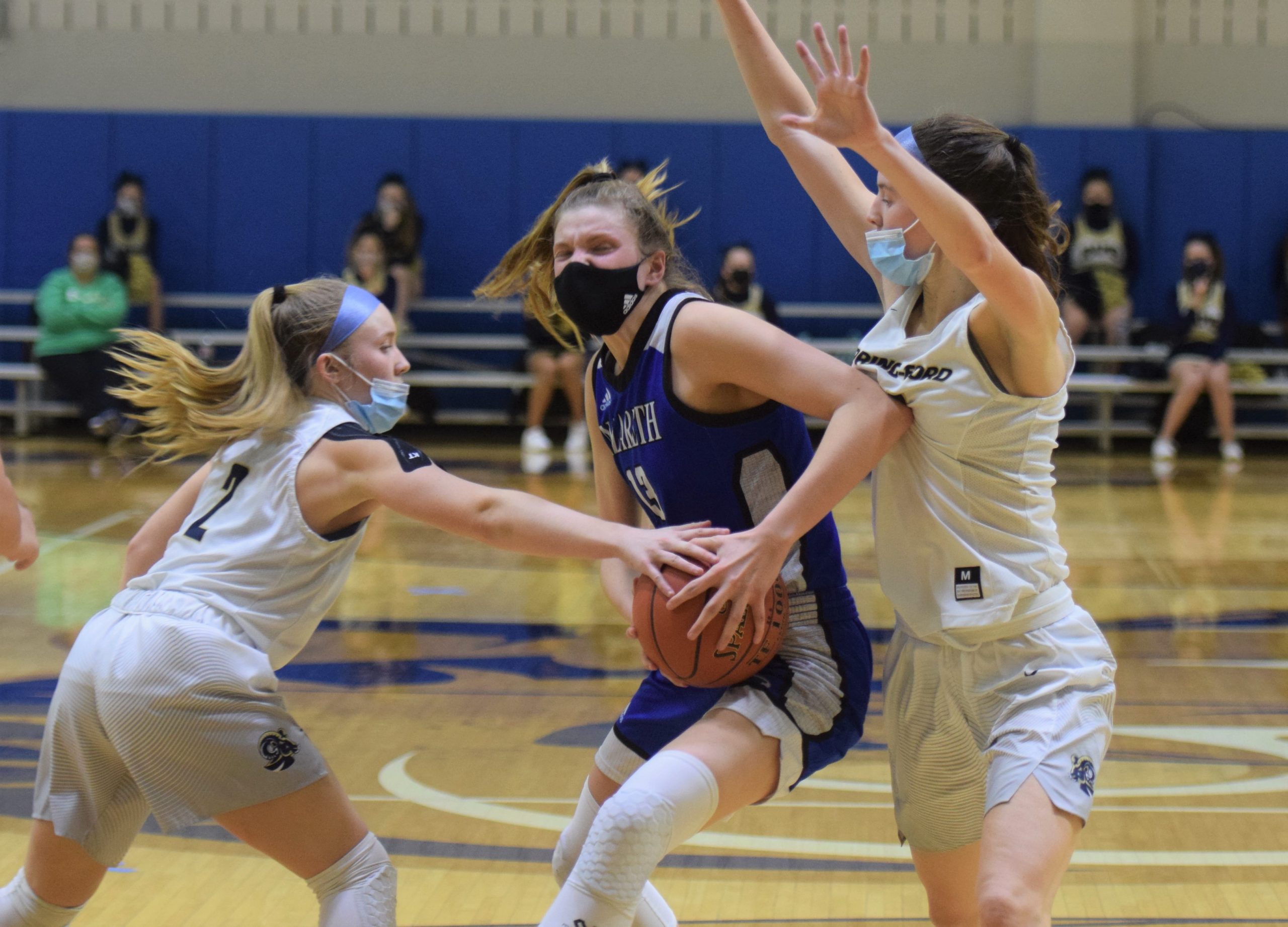 ROYERSFORD >> Defense is one of the core values of the Spring-Ford’s girls basketball program — if not at the top of the list.

With its offense slowed after a hot start and clutch free throw shooting absent during Monday’s PIAA Class 6A semifinal against District 11 champion Nazareth, Spring-Ford fell back on its defensive prowess.

A late steal by freshman Mac Pettinelli and a game-sealing block by senior Lucy Olsen clinched a 46-43 win for the Rams and the school’s first PIAA championship appearance since playing in back-to-back title games in 2013 and 2014.

Rams escape a tough Eagles team and are on to the state final Friday vs North Allegheny pic.twitter.com/AyLIZZTs5A Junior Madeline Ahearn led Nazareth (17-2) with 18 points on six 3-pointers, and junior Kelly Leszcysnki chipped in with 10, knocking down a pair of long balls.

Spring-Ford (24-0) will face District 7 champion North Allegheny (26-1), a 66-40 winner over District 3’s Cumberland Valley for the PIAA Class 6A championship at the Giant Center in Hershey on Friday (5 p.m.). The Rams won the title during their trip to Hershey in 2013.

The Rams’ defense helped Spring-Ford score six straight points to begin the fourth quarter and open up a 42-34 lead with four and a half minutes remaining in the game.

Spring-Ford finished the game 6-for-12 from the charity stripe, including a 6-for-11 showing from Olsen, a 77 percent free throw shooter. An inability to convert at the line let Nazareth climb back into the game, and the Blue Eagles trailed by just two, 45-43, with the ball and 33.5 seconds left.

Nazareth junior Sophia Zelasko tried to drive past Boyer on the baseline but Boyer walled her off and forced a pass to senior Courtney Paulson in the middle of the lane. Pettinelli swooped in front of Paulson to swipe the ball with 12 seconds to go.

“Earlier in the game, it happened when Lucy’s girl drove and I was kind of just staring and they got an open layup,” Pettinelli said. “When I knew Abbey’s girl was driving, I kind of knew my girls would be somewhere in the middle, so I kind of just stepped over and I was like, ‘If she’s going to pass it I’ll be in the way to intercept it.’”

Abbey Boyer with terrific D and Mac Pettinelli slides over for the steal. Spring-Ford up 45-43 with the ball and 12 seconds left. pic.twitter.com/39qI54vuMn

Olsen headed to the line for two free throws with 9.9 seconds left and her team up by two points. She went 1-for-2 to put Spring-Ford up 46-43, leaving the door open for a Blue Eagles squad that made eight threes on Monday.

With fouls to give, Spring-Ford trimmed the remaining time down to 4.8 seconds as Nazareth inbounded on the Rams side of the court. The Blue Eagles worked the ball to Leszcynski at the top of the key, but Olsen reached out to block the ball, which fell into Boyer’s hands as the final buzzer rang.

“We had no choice but to get a stop on that,” Olsen said. “I got caught somewhere, someone picked up my girl. We were all rotating, and I was like, ‘I have to step up. She can’t make this.’ I just ran out and hoped I touched it.” Nazareth’s Makenna Fortner (30) tries to pass down low as Spring-Ford’s Mackenzie Pettinelli (35) and Lucy Olsen try to deflect it during their PIAA 6A semifinal Monday at Spring-Ford. (Austin Hertzog – MediaNews Group)

Spring-Ford stormed out to a 16-3 lead in the first quarter as Azzara knocked down two threes and Boyer and senior Emily Tiffan both knocked down triples to go along with two Olsen buckets.

A 6-0 Nazareth run to end the first quarter closed the gap to 16-9. After an Ahearn three temporarily gave the Blue Eagles their first lead in the final seconds of the second, Pettinelli drilled a three at the buzzer off a feed from Olsen to give the Rams a 25-23 halftime advantage.

Spring-Ford, which made just on three in the second half, relented the lead again in the third quarter but another Pettinelli buzzer beater gave the Rams a 36-34 edge heading into the fourth.

The Rams let Nazareth get as close as one point in the fourth quarter, but they never gave up the lead in the final eight minutes.

“What we were really happy with was the poise that we had,” Spring-Ford coach Mickey McDaniel said. “We were up 16-3 but they came back. Teams that are striving to be champions don’t let that get to them, and that’s what they did. They played like champions tonight.” Spring-Ford’s Lucy Olsen tries to split a pair of Nazareth defenders to get a shot off during their PIAA 6A semifinal Monday at Spring-Ford. (Austin Hertzog – MediaNews Group)

The Rams defensive-effort was well-rounded, but Tiffan, who also added five points, was Spring-Ford’s defensive star as she has been all season.

Tiffan shadowed Saint Joseph’s commit Talya Brugler around the court for most of the game, holding her to eight points.

“Emily Tiffan on Brugler, she did an awesome job on her,” McDaniel said. “A lot of credit to Tiff for the job she did because we give her the tough assignment every game.”

“She’ll have another tough one on Friday,” he added, referring to North Allegheny’s Lizzy Groetsch, a University of Pennsylvania recruit and Pennsylvania Basketball Coaches Association 2020 Girls Basketball Player of the Year. It’s been eight years since Spring-Ford last reached the state championship game and nine seasons since the Rams came away with the PIAA title. Four senior classes have gone through the program since without getting back.

The Rams’ seniors have had a constant reminder throughout their four years of the program’s previous accomplishments as a large banner with a picture of the 2013 squad hands right above the team’s locker room entrance in the Spring-Ford gym with a banner commemorating the 2014 runner-up squad right next to it.

After years of waiting its turn, the Rams’ Class of 2021 now gets its opportunity to add to the program’s legacy.

Nazareth vs Spring-Ford (PIAA 6A semifinals)