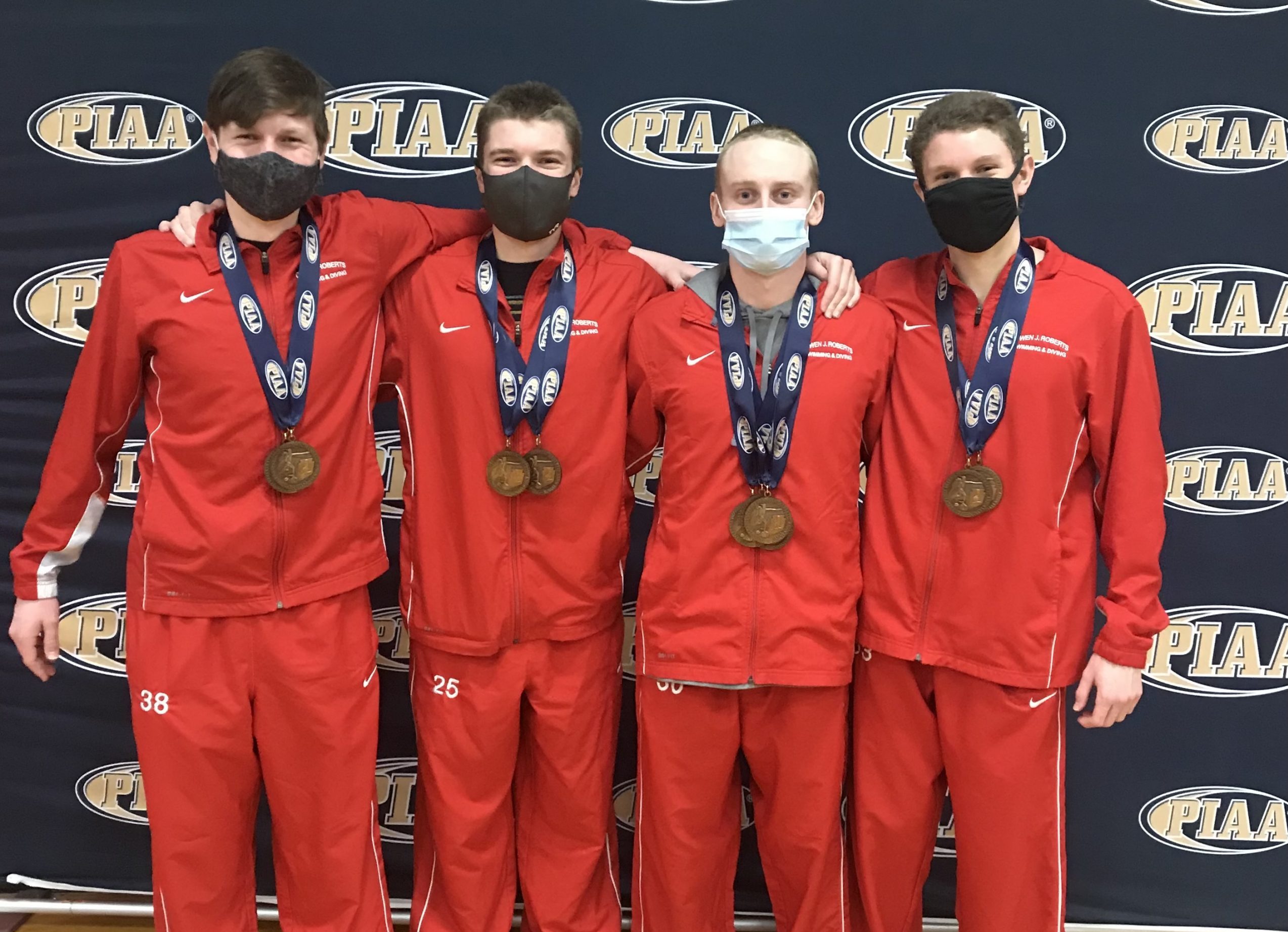 Owen J. Roberts’ quartet of state swimmers didn’t have any particular goals in mind for their last meet together.

For seniors Dalton Fink, Jonah Kasznay, Nathan Van Natter and junior Will Cano, racing one last time with each other at Saturday’s PIAA Class 3A Championships was enough motivation.

“It was our final opportunity to put up that time, do something great,” Kasznay said.

By the time they left Cumberland Valley High School, Fink, Kasznay, Van Natter and Cano found out they saved their best for last — and that their best is pretty darn good.

The Wildcats departed with two medals each — four for Fink who placed in two individual events too —and a final memory fitting for a fantastic last season together.

OJR’s foursome finished seventh in the 200-yard freestyle relay with a school record time of 1:25.63. They concluded the meet with a third-place finish in the 400 free relay with another program best time of 3:07.92.

The times were both National Interscholastic Swim Coaches Association All-American considerations as well.

“I just knew that this was my last swim with these guys and I just kept telling myself that I was going to do the absolute best that I could,” Cano said. “That’s all that we could do and obviously we did it and it worked out very well, so we’re very excited about that.”

Fink had a day to remember, tallying four total medals, which brought his career total to six state medals.

“Those medals are going to be with me, probably until I die,” Fink said. “I still got my ones from last year hanging up in my room front and center. These four are going to join them right there. Just being able to hold one of them knowing you earned it is such a great feeling. Being able to take four of them home is a different accomplishment, and I’m really happy about that.”

Perkiomen Valley junior Jacob Replogle was the Pioneer Athletic Conference’s top individual finisher of the day with a third place finish in the 500 free (4:32.23). He also added a fifth place finish in the 200 free (1:40.42). Both times were personal bests.

“My goals were just about where I ended up being,” said Replogle, who thanked his coaches for the way they prepped him for Saturday’s meet throughout the season. “I wanted to come in third or second in the 500 free and for the 200 free, I really didn’t have too many expectations.” Replogle made the ‘B’ final of the 200 free as a sophomore in 2020, finishing 12th. He placed eighth in the prelims of the 500 free before the second day of states was cancelled due to the COVID-19 pandemic last March.

With the ‘A’ final of the 500 free cancelled last season, Replogle earned an eighth-place medal, but Saturday marked his first time actually racing for the award.

“Last year, that was really upsetting not getting to swim in the finals,” Replogle said. “This year it was fantastic being able to swim and then finish third.”

He said he’s still waiting on the eighth-place medal for the 500 free from last season to arrive, so Saturday also marked the first he held his PIAA hardware.

“It was very rewarding,” he added. “I’m very happy with it.”

With 16 participants in each event, all of Saturday’s swimmers and relay teams were state finalists.

Kasznay finished 11th in the 200 individual medley (1:54.18) in his first time swimming as an individual at states.

“It was such a great experience,” Kasznay said. “I had so much fun with it. To be honest, I was glad that (the 200 IM) was before the relays because I wanted to be all there for the boys. … I was able to compartmentalize it so I had my individual and then my relays. Doing it as an individual, to be among some of the best in the state, it was great. It was a great experience.”

Kasznay, Cano, Fink and Van Natter traveled to states last season together, earning a spot in the ‘B’ final in both the 200 and 400 free relays.

The group finished second and third, respectively, at the District 1 meet to put themselves in the ‘A’ final this season and found a way to one up themselves again on Saturday in their last race together.

“It was an amazing opportunity and I would not have wanted to do it with anybody else,” Van Natter said. “These guys were just the most amazing teammates and friends I could ever ask for.”

“It was kind of sad, but it was also very, very exciting to have been able to break another team record for my last swim meet on this team,” he added.

Next season, Van Natter is headed to Shippensburg University, Kasznay to Ursinus College and Fink to West Chester University.

Cano has another year left with the Wildcats program and a plethora of experience and wisdom to pass down from his departing teammates.

“I’m so happy about the mark that we’re going to leave on this program,” Kasznay said. “Not only are we leaving our mark on the board with our pool record times and team record times and Dalton individually as well, we’re leaving our mark on the team as great seniors who have helped and motivated the younger kid and showed them exactly what a team is and how great the sport is.”

Like the lessons they’ve learned will remain with the OJR program for years to come, so will the memories of Saturday’s race stick with OJR’s special group.

“The meet as a whole is going to stay with me,” Fink said. “Four years of some of the best swimming and best memories of my life. This meet being the last one is definitely one to remember and I’m really happy this is how it all ended.”