COVID no match for the growth of PA girls wrestling 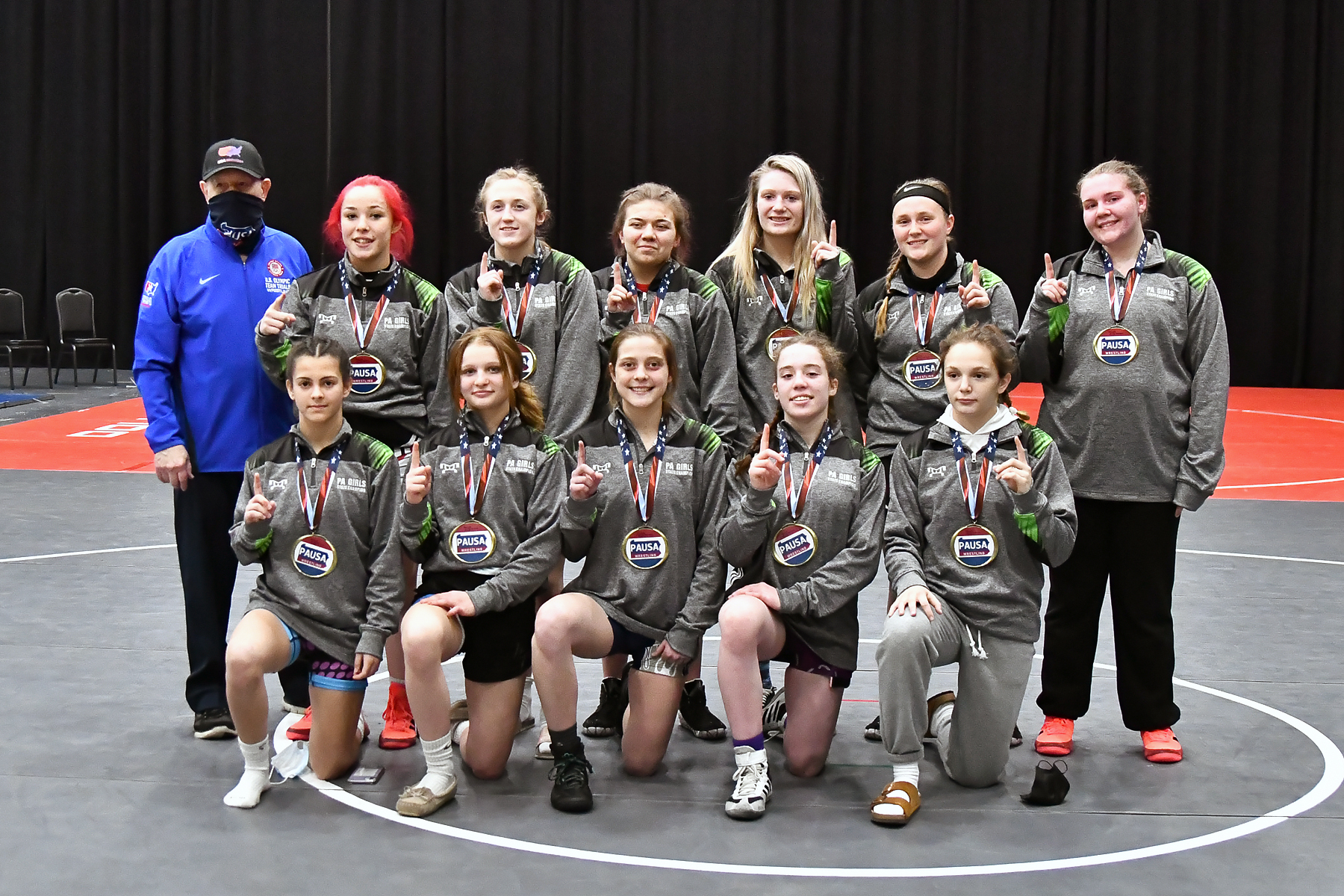 MANHEIM—It was barely a year ago that the #SanctionPA movement kicked off, an effort seeking the PIAA sanctioning of girls wrestling in the state of Pennsylvania. The number of girls participating in the state was exploding, increasing at nearly exponential rates. Then came the pandemic.

All of a sudden the entire sports world was thrown into flux, with more questions than answers. Somehow, though, the number of girls participating in the sport at the high school level still rose, and the number of school-sponsored teams rose to nine. Many of those girls descended upon the Spooky Nook Sports Complex Sunday, battling for one of ten state championship gold medals at the MyHouse/PAUSAW Girls Folksyle State championships.

“Nobody had any idea what would happen with the pandemic,” said #SanctionPA volunteer Leah Wright. ”But the number of girls just at the high school level rose by 30-percent, and girls-only clubs started springing up all over the state for girls of all age groups. The interest is there, and is only getting stronger. State sanctioning would give these girls the same opportunities for coaching and competition that the boys have.”

Action kicked off at 101-pounds, with a bout between Jaylean Pletz of Governor Mifflin (one of the nine schools sponsoring a girls’ team) and Sagertown’s Karleigh Steiger. Pletz took control early with a quick takedown, and just poured it on, twice locking up a bar and half combo, the second of which resulted in a fall at 4:51. Dr. Joesph Bradley, a PIAA wrestling official for the last 22 years and Superintendent of the Connellsville school district in Western PA, makes it a point to come out to referee the event each year.

“The values and benefits of discipline and worth ethic that males have gotten out of the sport for years would be the same for girls,” said Bradley. “With the rich tradition of wrestling there is in Pennsylvania, I think sanctioning and recognizing female wrestling would be a positive all around. I have a young daughter and I’d love to see her have the chance to wrestle for her school like the boys do, if that is what she wants.”

The 108-pound class final featured some incredible action by two very skilled competitors. Lexia Schecterly, for Lake-Lehman High School, squared off against Fort LeBouf’s Andie Przybycien. Schecterly made a little PA girls wrestling history just about a month ago, when she became the first female to reach the finals of the PIAA District 2 championships. Schecterly scored first, coming out of a scramble to get behind for two. Przybycien wriggled free for an escape, and hit a beautiful throw that landed Schecterly on her back, but, alas, it was out of bounds. After a scoreless second period, Schecterly broke free for an escape midway through the third, and held on for the 3-2 victory.

If you blinked, you missed it at 115, as Payton Plummer of Orchard girls wrestling locked up a crossface cradle to pin Alexis Brua of Rogue Girls Wrestling in just 32-seconds. Kennett’s Haylie Jaffe reached the 122 pound finals, where she’d face off against Marissa Rumsey of Ride Out Wrestling Club. It was a re-match of a Pennsylvania Junior Wrestling final a year ago, where Rumsey squeaked out an overtime win. There was no suspense this time around, as Jaffe jumped out quickly with a takedown, and twice scored nearfall with a butcher for an 8-0 lead after one. Jaffe then cruised to a 16-2 major decision. “I’ve just worked really hard over the past year,” said Jaffe, who puts in time at various local clubs for women’s wrestling, including Kennett’s Kraken. “I’ve tried to work hard, and listen to all my coaches. It feels amazing to have it pay off with a state championship.”

John Boyer, a long-time coach at every level of Kennett wrestling and the founder of Kraken, couldn’t say enough about Jaffe’s work ethic.

“We were a little nervous going in because last year it was so close,” said Boyer. “But she put the time in—going to the gym, and committing to Crossfit when she wasn’t training with us, or Misfits, or the Lancaster Alliance women’s’club (LAWW). It doesn’t hurt that she has a nationally ranked girl from Delaware, Alyssa Mahan, to work with here, but she’s willing to travel to get tough competition.”

Kennett varsity head coach Kevin Reigel was equally impressed, with both Jaffe, and the overall quality of wrestling at the event.

“Haylie clearly loves wrestling, and she is a sponge, absorbing everything she can from anyone willing to help her,” said Reigel, “She works as hard or harder than anyone, but always with a smile. Nothing fazes her, and I couldn’t be happier for her. I was impressed with the whole day of wrestling—especially the finals. It was tons of good wrestling, and they are tough. They are wrestlers.”

Up next came Gettysburg senior Montana Delawder, seeking her fourth straight high school title, after becoming the winningest female in PIAA history last month. Delawder finished her career against the boys with 85 wins. But for COVID and an abbreviated regular season this year, Delawder would have had a legitimate shot at reaching the 100 victory milestone, a mark every prep wrestler seeks. Delawder was her usual dominant self, picking up a pin over Canton Area’s Miah Lehman in 1:09. It was one of the last times Delawder, a King University recruit will get the chance to wrestle folkstyle, as women’s college wrestling is all freestyle, which is the style wrestled in the Olympics.

“I’ll definitely miss folkstyle,” said Delawder. “It was fun being on my high school team, and wrestling with the boys made me a better wrestler.”

Delawder’s success likely opened the doors for a lot of Gettysburg girls interested in the sport, as Gettysburg is also on the list of PA schools to sponsor girls wrestling. In addition to Gettysburg, and Governor Mifflin, the schools include McCaskey, Easton, Executive Education Academy, North Allegheny, Central Mountain, and Annville-Cleona.

134 featured a pair of returning champs in Lily Sherer from Delaware Valley, and Juliana Figueroa of Pottstown. Sherer, who will continue her wrestling career at Lock Haven University, made quick work of Figueroa, getting a first period fall at 1:24. “This event has been a lot of fun over the years,” said Sherer. “It has been fun to see it grow the way it has and to see the really talented new girls coming up. Girls like Lexia Schecterly, who is going to be the next big name in PA girls wrestling, to follow me, and Tana (Delwader) and Tif (Baublitz).”

Dubois’ Andrea Wilmouth came from behind to get a pin for the victory at 147, leaving Central York’s Alexxa Ortiz to settle for her second straight runner-up finish. At 162, Maverick’s Tiffani Baublitz made it four straight titles, capping her high school career with a 9-1 major decision over Greater Nanticoke Area’s Kaitlin Pegarella. Baublitz will be joining Delawder at King University next year. Rachel Keller picked up the 184-pound championship, earning a fall at 4:52 over Central Mountain’s Rhiannon McCracken.

The final bout of the day came at 222. Souderton’s Trinity Monaghan outlasted Lilliana Campitelli of Governor Mifflin. The two battled to a tie for 5:43 seconds before Campitelli was forced to injury default.