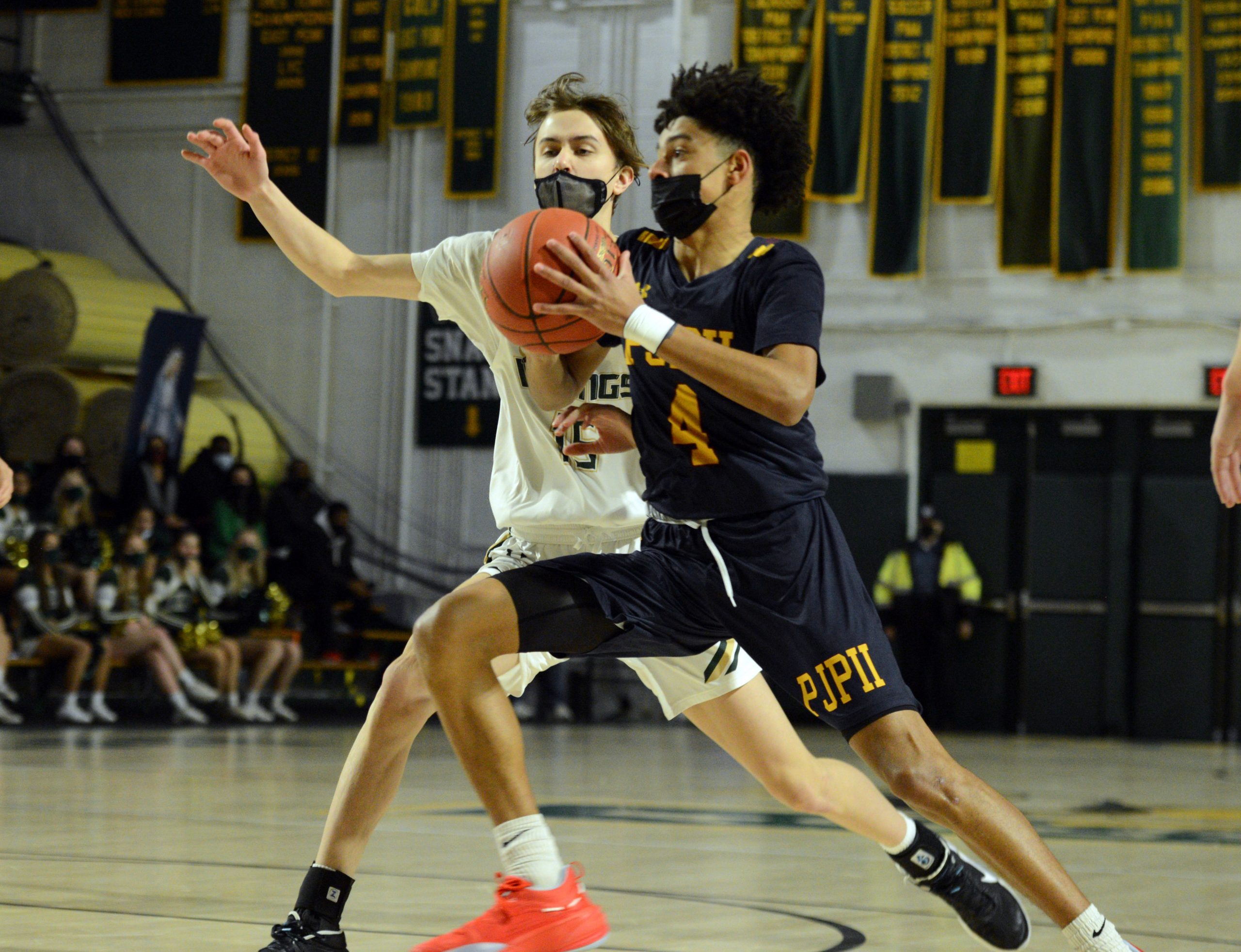 ALLENTOWN >> It was an ‘unbelievable movie, just a really crappy ending’.

The description seemed fitting as several Golden Panthers walked out of the locker room teary-eyed, following an ending to a terrific two seasons that came a few games shorter than they’d let themselves dream.

A season after upsetting the District 11 champions on a last-second shot for the school’s first spot in the state quarterfinals, the Golden Panthers couldn’t repeat the magic formula, falling four points short of knocking off the Vikings once again.

The loss ended the careers for a PJP senior class that turned a .500 squad in Stanton’s first year three seasons ago into a back-to-back District 1 champion and state playoff qualifier.

“The record before they ascended to JV and varsity was not good, and they’ve really been the life of this turnaround,” Stanton said. “Their focus, their energy, how much they love playing together, their general fun attitude and how much they don’t really care about who they play or how big a team is. That’s something that I’m super proud of. And like I said, it’s a bad ending but it doesn’t really tell the story of those seniors.”

Memories of last year’s win over Central Catholic carried over into this season for Pope John Paul II. It was the last game for the Golden Panthers before COVID-19 cancelled the remainder of the 2019-20 PIAA winter sports championships and deepest postseason run in PJP history.

The Vikings had memories as well they held onto for more than a calendar year, though they were not as pleasant as the Golden Panthers’ recollections.

PJP junior JP Baron scored 19 points, but Central Catholic big man Liam Joyce scored 20 and Tyson Thomas 11 to get revenge on the Golden Panthers, who spoiled their season a year ago.

“Last year, it was an ugly game for us,” Joyce said. “We went down to a school near them. They had a full crowd and it was just a bad round for us. Once we found out we were playing them, we had a little bit of a bad taste in our mouth and we were ready to go again.” The Golden Panthers led after each of the first three quarters, pulling in front 16-11 after the first, 19-13 at halftime and, even after temporarily relinquishing the lead, going into the final period with a 31-27 advantage.

A transition three by Thomas put the Vikings ahead 33-31 with four and half minutes left in the game. He followed with two free throws to extend the lead to four and added another foul shot at the 1:30 mark to make it a 38-33 contest with a minute and a half remaining.

Baron knocked down a three to pull PJP within two, but two empty trips and four straight free throws by Griffin Patridge put the Golden Panthers into a nearly insurmountable hole, down 43-36 with 30 seconds left.

To its credit, PJP kept believing the ending to its story wasn’t ready to be written. A missed dunk and four straight missed free throws gave the Golden Panthers a glimmer of hope with about three seconds left. But instead of the ball finding the hands of a PJP player for a miracle shot, Joyce came down with an offensive board to send to Central Catholic into the state quarterfinal against District 12-4A champion Archbishop Carroll.

“They were definitely a big team, and we were definitely undersized, but we worked all week at practice to stop them,” Baron said. “Obviously, that rebound at the end for them was crucial but I feel like we did the best we could.” Though junior forward Justin Green returned from injury, PJP was undermanned in the paint on Tuesday night with Joyce and Christian Spugnardi proving a handful to handle, particularly on the offensive glass.

Joyce had nine points in the first quarter, but the sharpshooting of Baron, who had 10 through eight minutes, had PJP in front.

The Golden Panthers, mostly due to the efforts of senior Liam Haffey, kept Joyce scoreless in the second, holding the Vikings to two total points in the second quarter.

Joyce broke out again in the second half with six points in the third quarter and five in the fourth. Possibly more importantly, he and Spugnardi used their size to keep a number of Central Catholic possessions alive after PJP got defensive stops.

“(Joyce) is a heckuva player,” Stanton said. “Obviously he and Thomas are two of the best players in the (Lehigh Valley) area. We did a pretty good job on Thomas all night. I thought our guys did a good job. It just came down to offensive rebounds.

“We were fronting the post and that’s what you’re going to have to live with. Unfortunately, it felt like in the second half every time there was a loose ball it fell into Liam Joyce’s hands and sometimes that’s life. That’s how basketball goes.” PJP hadn’t advanced to the state playoffs since 2013 prior to last season. The Golden Panthers tripled the school’s state playoff win total after two wins in the PIAA tournament during a 2019-20 season that also saw them set the program record with 21 wins.

This season, Stanton’s squad didn’t have enough games to match last year’s record win total, but they rolled out a record 13 straight wins out of the gate on the way to a 14-1 regular season mark and the school’s first Pioneer Athletic Conference championship since it’s inaugural campaign a decade ago.

Green, headed to Catholic University, was one of the league’s best players as a sophomore and junior before ankle injuries cost him much of his senior season. He had all six of his points in the third quarter, including two straight buckets at the end of the period to send PJP into the fourth with a four-point lead.

McCarthy turned himself into one of the PAC’s best guards this season. Fellow senior Haffey found himself making play after play in Green’s absence throughout the winter, shining once again Tuesday night with seven points. Mike Wells was a spark off the bench for PJP.

The group along with fellow seniors Justin Carr and Pat Mink raised the bar for a program that didn’t have a winning season in six years before their historic run as juniors in 2019-20.

Now, the goal for Baron and classmates Jaden Workman and Kevin Green will be to continue the upward trajectory the senior class left PJP on.

“I feel like our mindset has to be the same as this year,” Baron said. “Work at what we did to get where we are now. It’s definitely disappointing. We had a great squad and I wish we could have gone further with this squad. It’s a special group of kids and I feel like we all bonded together. We were one big family and I wish we could go on after this but unfortunately we cannot.”