Abbonizio steps up again to lead Springfield to crown 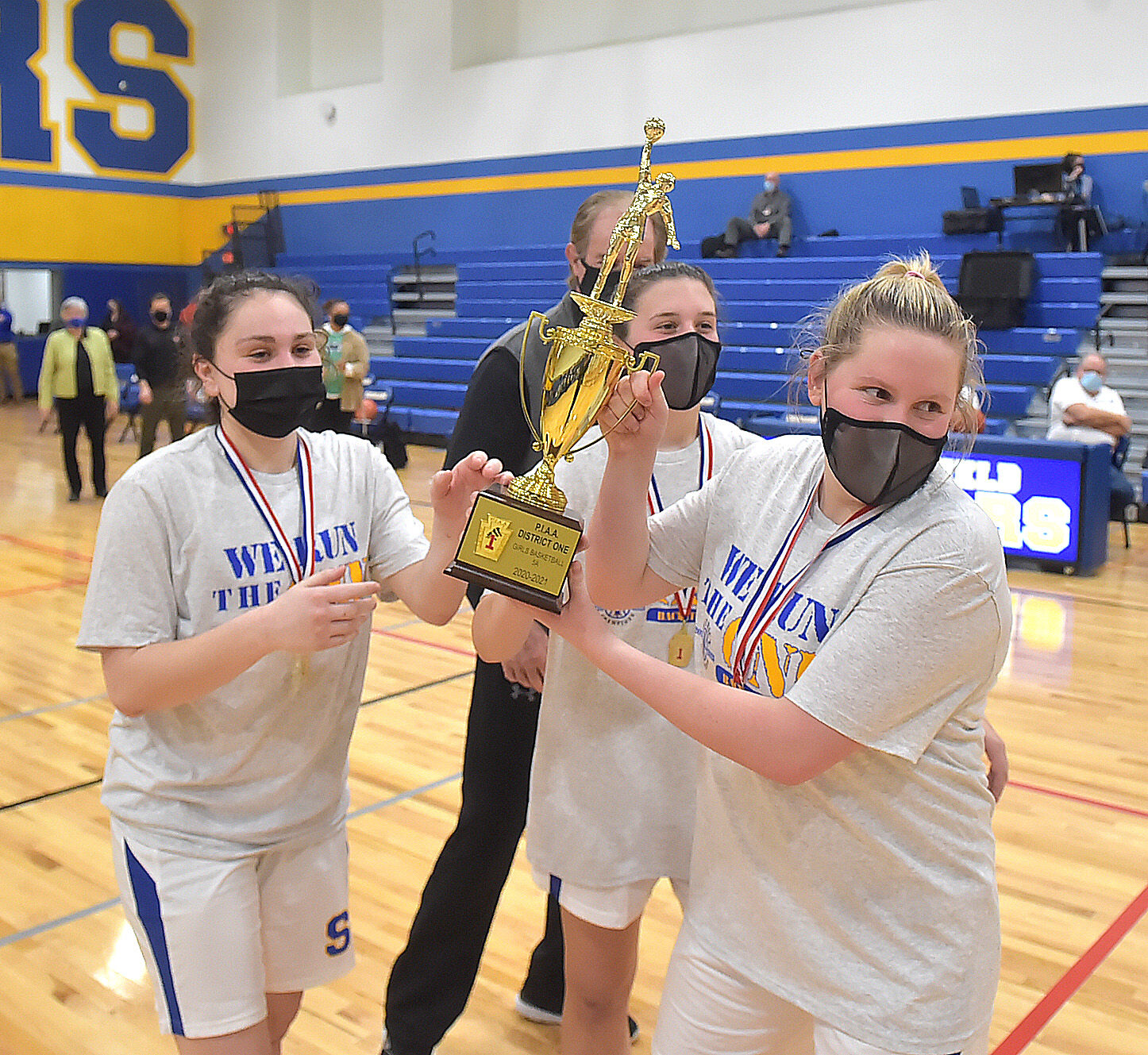 SPRINGFIELD >> Alexa Abbonizio has made a high school career out of making clutch baskets.

The Springfield senior did it again (and again, and again) Wednesday night in the District 1 Class 5A championship.

Abbonizio’s torrid fourth quarter, in which she scored all 14 of her team’s points, carried No. 1 Springfield to its second straight district title, a 46-39 decision over Central League rival and second-seeded Harriton.

Earlier in the year, the All-Delco became the program’s all-time leading scorer. She’s been padding her record ever since.

“Alexa’s put this team on her back for four years and she’s been a dominant part of this program for four years,” said coach Ky McNichol, who has guided the Cougars to district championships in three of her first six years at the helm. “What she did tonight was basically say, ‘I’m going to finish for my team, I’m not going to let us go down.’ I told them during a timeout that all we needed was to bury one 3 and we would be OK. So, once she buried the 2 and then buried the 3, I knew we were OK.

“Big players step up in big moments and she’s been a big player for us, game in and game out for four years.” Springfield’s Alexa Abbonizio puts up a basket in the fourth quarter as the Cougars pulled away from Harriton, 46-39, to win the District 1 Class 5A Championship Wednesday. Abbonizio scored all 14 of the Cougars’ fourth-quarter points. (PETE BANNAN/MEDIANEWS GROUP)

Abbonizio delivered the goods. She shot 5 of 6 from the floor and went 2-for-2 at the free-throw line in the final eight minutes. Her 3-pointer at the top of the perimeter with four minutes to go was the dagger. Harriton had cut Springfield’s double-digit, second-half lead to five points in the fourth period before Abbonizio seized control and carried Springfield to the finish line. She recovered quite nicely after shooting 0-for-4 from the floor in a slow-moving third quarter.

“In the third quarter, they were getting a little close. But it wasn’t just about me,” Abbonizio said. “It’s a team thing, helping me do that in the fourth quarter. To be able to score some points for the team and give us a little bit of a lead was a great feeling.”

Rachel Conran, Abbonizio’s partner in crime at Springfield the last four years, has seen her friend and teammate rise to the occasion so many times that it’s never a surprise to see Abbonizio take over a game. Conran and Abbonizio have shared the limelight over the years, particularly during the Cougars’ run of back-to-back district championships.

“She stepped up like she always does in big situations,” said Conran, who produced nine points, six rebounds and four assists. “She was great.” Springfield’s Makayla Cox scrambles for a loose ball against Harriton’s Annie Aspesi, left, and Maretta Smith in the first half of the District 1 Class 5A title game Wednesday night. (PETE BANNAN/MEDIANEWS GROUP)

Makayla Cox, Springfield’s third co-captain alongside Abbonizio and Conran, provided stellar defense and help on the offensive side. Cox’s biggest contribution transpired with 2:43 to go in the fourth quarter when she took a charge as Annie Aspesi attempted to drive to the basket. At the time the Cougars were ahead by six points.

“Makayla is a great senior and she always does the little things that necessarily don’t get noticed as much,” Conran said. “But, you know, she’s always there making the extra pass and taking charges, which is great.”

Springfield (20-0) held a 28-16 at halftime after shooting 11-for-21 in the first half. The third quarter was an unexpected snoozer. The Rams surprisingly came out in a soft 2-3 zone, which enabled the Cougars to dribble around and let the clock run down. Springfield played at Harriton’s pace, which proved costly for the Rams in the fourth quarter. Because the Rams had failed to force Springfield’s hand in the third period, they were left scrambling in crunch time with several fouls to give in the waning minutes.

“That’s not the first time teams have come out after halftime and tried to adjust and we were up by a pretty comfortable amount,” Conran said. ‘We knew they had to come to us and we didn’t have to come to them.”

By the time Harriton started to come to Springfield, it was a case of too little, too late. Springfield’s Rachel Conran lays up to the basket in the first half of the PIAA District 1 Class 5A title game. The Cougars went on to victory, 46-39. (PETE BANNAN/MEDIANEWS GROUP)

Maddy Calhoun led the Rams with 13 points and Aspesi chipped in with 11. Maretta Smith added six points, five rebounds, two assists, one steal and one block.

Springfield will enter the PIAA Class 5A tournament with a 20-0 record. The Cougars won the Central League and District 1 championships on their home floor. On Saturday they will host their first state playoff game against District 2 champion Abington Heights.

“It’s pretty surreal and it’s unbelievable what we’ve been able to do this season,” Abbonizio said. “We did it all in our home gym, which is incredible. … Whatever happens in states, happens. We have two district championships under our belt and that’s a great feeling. We definitely want to win in states, but it’s been a great season so far.”

Toohey: In a year of COVID, a banner year for Springfield
Plymouth Whitemarsh powers past CB East in District 1 6A semifinals