Running In Place: After years on the move, Coatesville’s Terrance Laird has found peace at LSU, and a speed no one can match 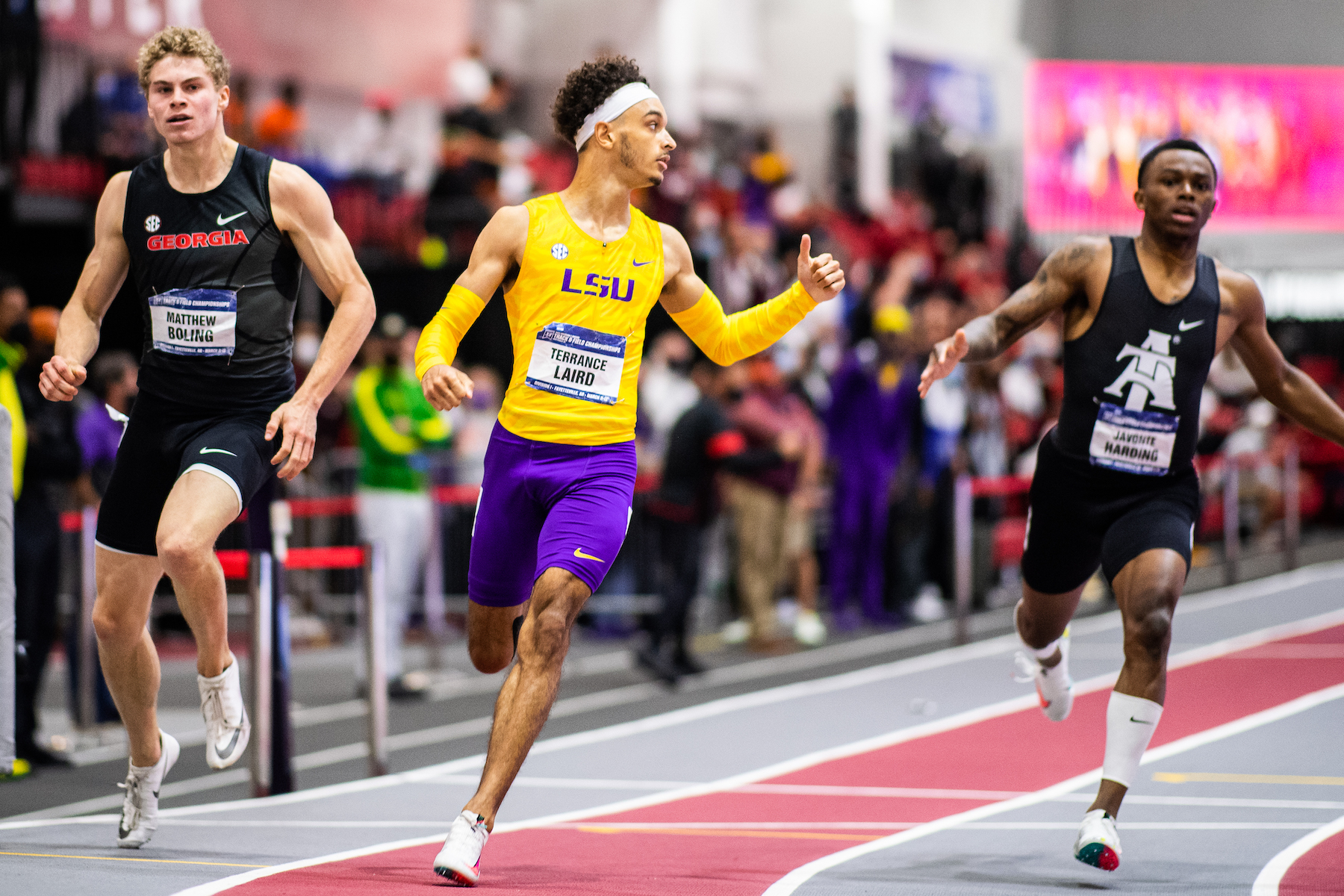 Terrance Laird can move. And not only can he do it quickly, he tends to do it often.

At the age of 22, the Chester County native has emerged as a world-class sprinter. Anybody flirting with a sub-20-second time in the 200-meter dash is undoubtedly a legitimate Olympic prospect, and Laird proved that at last weekend’s NCAA Indoor Championship.

And after spending time at multiple colleges, he has finally found a home at Louisiana State University. And for a person like Laird, that is huge.

“Even as a kid, I’ve always been kind of moving around,” Laird said. “I guess it was something that I just got accustomed to. It wouldn’t be accurate to call Laird a loner. Or a vagabond. He just prefers to be on his own so he can concentrate on himself and his lofty aspirations. And he is rarely content to settle down in one place before moving on to whatever is next.

Over the course of the last six years, Laird has attended three different high schools and three different colleges. And dating back to 2015 he never lasted much more than a year at any of those stops … until LSU. He arrived in Baton Rouge in the fall of 2019 and plans to stay until he’s earned his diploma in Interdisciplinary Studies.

“To actually find a home, it feels different but it also feels pretty good,” Laird acknowledged. “LSU is the best place for me academically and track-wise.

“It couldn’t be a better fit.”

FROM HIS FIRST LOVE, BASEBALL, TO TRACK

Laird certainly wasn’t born into an ideal situation. His birth parents weren’t around, so he was shuffled between family members for much of his childhood in very urban Coatesville and the decidedly rural area near Elverson. He final settled with his aunt and uncle, Samantha and Robert Oberholtzer, in the northwest corner of Chester County.

“My aunt and uncle eventually adopted me because it was easier based on the situation and the legal side of things, rather than just to live with them,” Terrance explained.

“My biological father is deceased. My biological mother – I wouldn’t say she is unfit, but she has other priorities than me.”

He attended Twin Valley High School for two-plus years, and baseball was his first love.

“It was a very rural place with a lot of farmland,” Laird recalled. “I remember working on the farm and playing outside with my cousins.

“We were always outside with the cow manure,” he chuckled.

In springtime of his junior year, the Oberholtzers moved to Coatesville. It wasn’t a shock to his system, however, because Laird already had family in the area and had visited often.

The biggest obstacle was the timing: he had already missed the baseball preseason.

“I knew I wouldn’t be able to play baseball at Coatesville because I transferred in too late,” Laird said. “I had to pick another sport.”

ON TO HIGH SCHOOL AND COLLEGE SUCCESS

With the knowledge that he had never been beaten in a foot race, Laird contacted head track coach Damien Henry.

Terrance Laird of Coatesville was the 2017 Boys Track and Field Athlete of the Year. (PETE BANNAN — DIGITAL FIRST MEDIA)

“I was always the fastest kid, but track-fast is kind of different,” he said. “That’s why I wanted to give it a shot to see if I was really fast, or if it was just a 20-second burst on the playground playing with my friends.

“It ended up being a good decision, but I still miss baseball. Track is just the place where I had more potential.”

Laird was immediately a top-notch high school sprinter for the Red Raiders, and the 2017 Daily Local News All-Area Boys Track & Field Athlete of the Year. Not long thereafter, he committed to Penn State. But after one semester he quickly decided that Coatesville High School was not the place for him either socially or academically.

“I didn’t like how crazy things could be at Coatesville,” he admitted. “I thought it was a good decision to make sure I wasn’t at the wrong place at the wrong time.”

So for his senior year, Laird attended Collegium Charter in West Chester, but because the school did not field a track team, he was allowed to continue competing for Coatesville.

“I also knew heading to Penn State that the academics would be something I wasn’t used to,” Laird said. “Collegium Charter was a way to prep myself for more rigorous academics. It was time for a change.”

He went on to win the individual state title in the 200 as a senior and anchored the gold medal winning 4×100 relay. Laird was subsequently named the Daily Local News Track Athlete of the Year in 2017.

He spent 2017-18 academic year at Penn State, and was the Big 10 Conference runner-up in the 200 and placed 12th overall at the NCAAs. But Laird was not happy.

“I didn’t have a problem the coaching, but I didn’t like the location and the culture of the school,” he said. “And I responded in a silly way and let it affect my academics.

“I just didn’t want to be there. My athletic performance kind of took a hit too. Track and field came more natural to me, but with academics, I needed to dedicate more time to it.”

With limited options due to his grades, Laird transferred to Hinds Community College in Mississippi to run for head coach Reginald Dillon. During the 2018-19 year, he got his academics in order and also placed second in the 100-meter dash at the NJCAA Championships.

“I still talk to coach Dillon every day,” Laird said. “He mentored me and shaped me for when it was time to move on.”

It all led to a scholarship offer from LSU head coach Dennis Shaver.

MAKING AN IMMEDIATE IMPACT AT LSU

A traditional national power, LSU welcomed Laird with open arms and he made an immediate impact, earning All-American honors in the 200 and as a member of the 4×400 relay. In the late winter of 2020 he was the top seed in the 200 heading into the NCAA National Championships with a 20.43 qualifying time that was the fastest ’20 indoor time in the world.

But before he had a chance to compete for a national crown, everything was shut down due to the coronavirus pandemic.

“It was disappointing and frustrating because things were going so well. It wasn’t like I was hurt or something,” he said.

But Laird isn’t one to bemoan adversity. The season ended abruptly but it also provided some unexpected time for him to focus on his academics and work on his technique while continue his training. It also helped to provide some clarity for his immediate future.

“Going professional would have been a consideration if the season wasn’t cut short,” he said. “So it was more of a blessing in disguise because I was able to come back to LSU.

“With the pandemic, my scholarship was still here. I didn’t have any decisions to make — I was coming back. It gave me another hurdle to clear. It gave me more purpose for this season.”

Laird responded with a sublime campaign that helped LSU move up to become the second best men’s team in the nation. It culminated late last month when he won the Southeast Conference (SEC) title in the 200 and led the Tigers to the team crown. His blistering time of 20.28 established new LSU and SEC records, and was world’s best for 2021.

“Records are meant to be broken and mine will fall at some point,” Laird said. “I felt that getting the 10 points toward the team title was more important.”

Laird was, once again, the top overall qualifier in the 200 heading into the NCAA Indoor Championships last weekend at the Randal Tyson Track Center in Fayetteville, Ark. It is the same site that he set his 2020 record a year ago.

“To be honest, I am more comfortable running there than running at LSU,” Laird acknowledged. “I don’t know what it is, but whenever I step into that building, I am ready to go.

“I love the track and the facility. So knowing that I bring three or four of my best times to this track, I know I can run fast there.”

And he did, blazing to a personal best 20.20 in the 200-meter final on Saturday. It was the seventh fastest 200 in collegiate history, but Laird was edged at the line by Georgia’s Matthew Boling by one-hundredth of a second.

Laird still has another year of college eligibility and he hasn’t ruled out returning to LSU for 2021-22. He is scheduled to graduate in December of this year.

“Right now I’m not focused on anything other than getting my degree and running for LSU,” he said.

During the past year in semi-solitude, Laird’s been able to shut out all of the outside noise and distractions by embracing the new realities imposed by COVID-19.

“I wouldn’t say I’m isolated, but that’s the way I’ve always been: to myself,” he said. “Because of the pandemic, I’ve been able to focus on the task at hand.

“I’ve been able to lock in and focus on the things that are important: school and track. And with this pandemic it’s actually made it easier for me. I don’t feel like I have to go to parties, or basketball games or go to a (New Orleans) Pelicans or (New Orleans) Saints game.”

Laird’s next moves will depend on what happens at the NCAA Outdoor Championships in June. And even though the 2020 Summer Olympics in Tokyo have been postponed to this summer, and the 2024 Olympics are just around the corner, he is trying not to think about any of that.

“I wouldn’t say I haven’t thought about it, but first on my priority list is NCAA and LSU,” Laird said. “The Olympics and professional opportunities will come when it is time.

“Instead of trying to jump the gun, I am focusing on this moment. I felt that in the past I was focusing on things in the future, but if I focus on what is in front of me right now, I am able to progress better.”

Malvern Prep’s D’Angelo Stocker is Main Line Boys Athlete of the Week
With District 1 title on the line, Rustin as ready as it can be for trip to Chester