Archbishop Wood gets revenge against Roman Catholic for PCL title 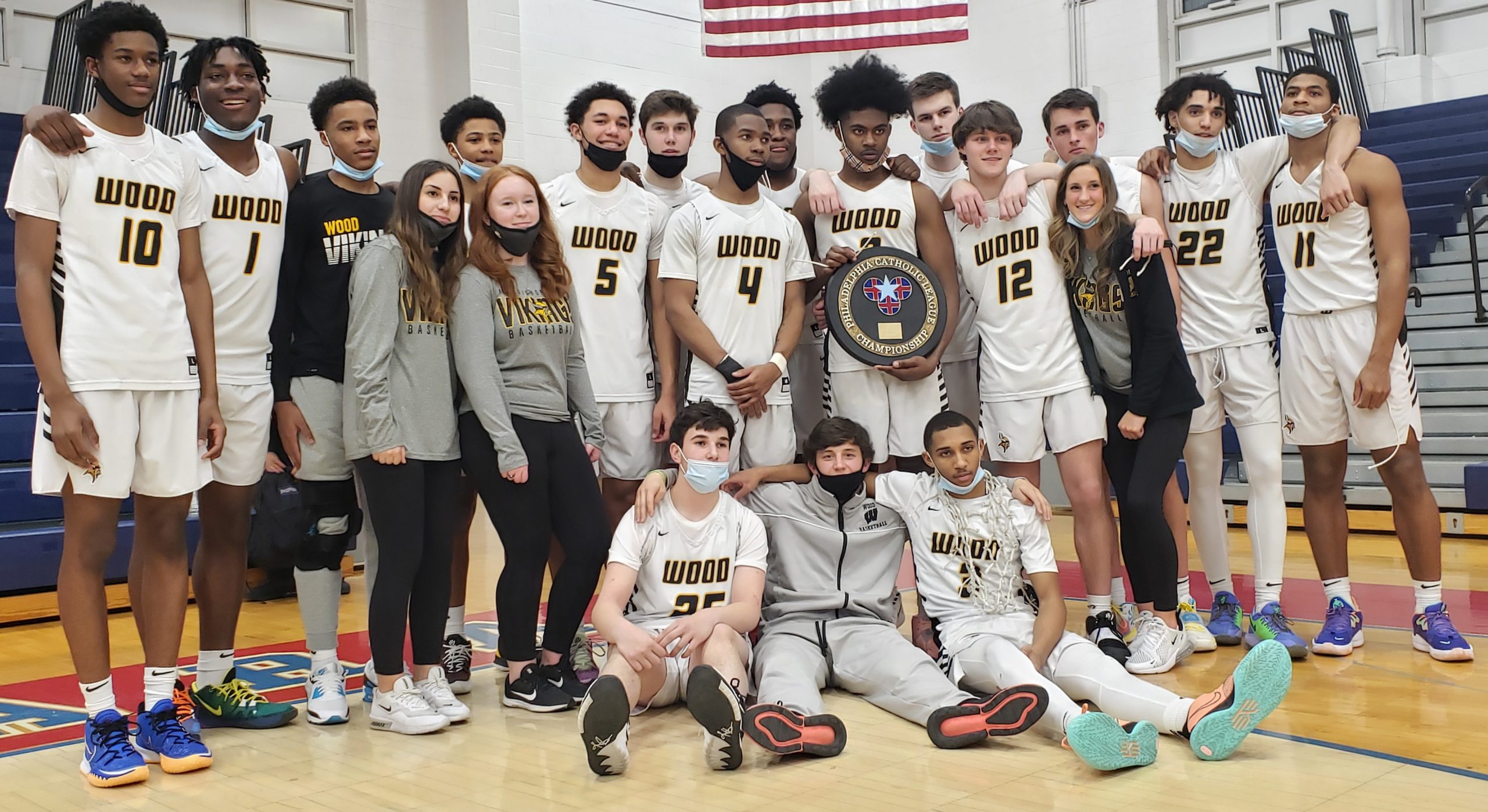 <The Archbishop Wood boys basketball team poses for a picture with the Philadelphia Catholic League trophy after defeating Roman Catholic in the final on Monday, March 15, 2021 at Cardinal O'Hara. (Ed Morlock/MediaNews Group)

MARPLE >> “Unfinished business” was a theme following Archbishop Wood’s 2019-20 season. The Vikings quest for a state championship was cut short due to the COVID-19 pandemic after their Philadelphia Catholic League title run came to an end in the semifinals against Roman Catholic.

Archbishop Wood got its revenge against Roman on the biggest stage. The Vikings won the second PCL championship in program history when they beat the Cahillites, 68-59, Monday night at Cardinal O’Hara High School.

“This was real personal,” Wood senior Marcus Randolph said. “The way they got us off the court last year – it just didn’t sit right with me. This year we came out and showed it was personal. We got the win this year in the bigger game.”

The Vikings (17-0) took control in the third quarter when a four-point halftime lead grew to 11, 52-41. Randolph scored six points in the frame while Jaylen Stinson added five and Muneer Newton four.

“At the start of the third quarter we said if you want them out of a zone, let’s get up 8-10 points then they got to come play us,” Wood coach Jon Mosco said. “They were focused, they kept sharing the ball, they know how to get each other the ball where they like it and keep each other hot or if somebody’s hot they feed that person.”

The Cahillites (10-3) didn’t go away without a fight. They trimmed their deficit to eight, 56-48, early in the fourth quarter and made it 56-50 halfway through the final frame.

Wood responded with Rahsool Diggins finding Daeshon Shepherd for an alley-oop. Diggins blocked a Roman shot on the ensuing possession, Shepherd grabbed the rebound and found Randolph for a breakaway jam and 60-50 lead with 3:19 to play.

“That definitely brought energy,” Shepherd said. “We were able to finish it out with a ‘W.’ I’m glad that we all had the energy to win it.”

Wood was able to hold the ball for 51 seconds before Stinson was fouled. He went 4-for-4 from the free throw line on back-to-back possessions before Randolph did the same.

“That right there is just experience,” Randolph said. “We’ve been in games where we played too conservative and teams would get a steal. That just comes from experience. We’ve got four seniors on the court so therefore we should never give up a five-point lead with one minute left. That’s how we felt down the stretch.”

“They were trying to foul,” Mosco said. “We’re seniors. We have great ball-handlers. We’ve got four, five guys that can handle the ball. They just played yo-yo with it. They knew they were going to get fouled and nobody was being selfish to try to get the foul. They just kept moving the ball.”

Mosco called Wood’s starters to the bench for a final ovation as the final seconds ticked away from a 68-59 win.

Stinson led the Vikings with 21 points while Randolph added 18 and Diggins and Newton each had nine. Shepherd finished with eight points.

Stinson got off to a fast start, hitting a three-pointer on the first possession of the game. He hit two threes in the first quarter and two more in the second.

Neither side could build more than a three-point lead early in the game. The PCL rivals found themselves tied 3-3, 6-6,9-9 and 11-11 before either team put together a run. Diggins made a three and Randolph a layup to give Wood a 16-11 advantage, but Roman’s Khalil Farmer hit back-to-back threes to give the Cahillites a 17-16 lead after eight minutes.

Stinson and Mike Knouse each hit threes to turn a 27-27 second-quarter tie into a 33-29 halftime lead for the Vikings. Farmer attempted to hold the ball for the final minute of the second quarter, but Randolph switched onto him, forced him to give up the ball and Roman was unable to score before intermission.

“It’s the last game,” Randolph said. “Say we lose and I let somebody else guard the man I was supposed to guard on a key play. I feel like that was a key play and if we had time to switch I should definitely get that switch. I like me vs. him.”

Farmer led Roman with a game-high 22 points. Daniel Skillings and Matijia Radunovic each added 13 and Xzayvier Brown had nine.

Archbishop Wood follows Allen’s shooting past Cardinal O’Hara to win PCL title
With District 1 title on the line, Rustin as ready as it can be for trip to Chester