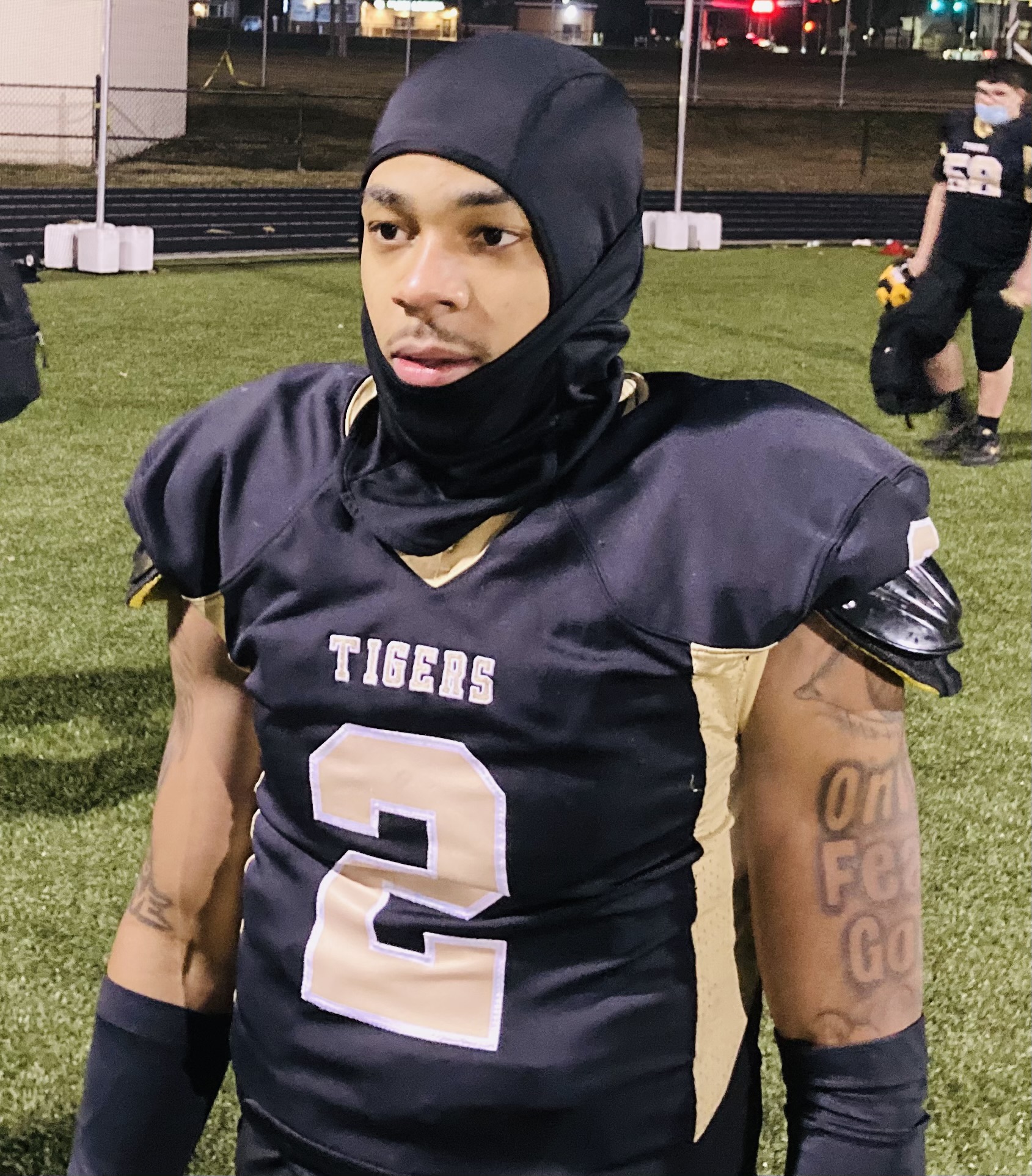 LEVITTOWN >> It seemed any time Sincere Thomas made a remarkable play for Truman Saturday night, he topped it.

Whether it was a weaving run through defenders, a tough catch in double coverage, or a 50-yard dash down the sideline, Thomas kept reaching the end zone – four times in all.

It took that kind of performance for the Tigers to be able to hold off a fierce second-half rally by Cheltenham, as Truman earned a 34-28 victory on Opening Night.

“This is a great win,” said Thomas, who piled up 173 yards on seven catches, adding 27 rushing yards and a two-point conversion catch. “This is a great team (we played). They were in the (5A) State Championship last year and played against Wood. They only lost by a couple points. It’s a very good team. And it was a good win for us.”

This spring offering a chance for squads like Truman and Cheltenham – who had their seasons postponed in the fall due to the pandemic – to finally take the field, Thomas had touchdown catches of 48, 16, 20 and 36 yards.

“Our offense is very good and I just get in open space and make everything happen,” the speedster said.

Big Second Quarter >> Truman got moving early in the second, on the churning legs of Kobe Pena.

Jordan Fant ran for 13 yards and caught a pass from quarterback Terrell Delp for 13 more.

And then on 1st-and-10 at the Cheltenham 48, Delp hit Thomas over the middle on a crossing pattern, and Thomas sprinted down the left sideline for the first points of the season.

The run for two failed, leaving the margin at 6-0.

Truman did not have to wait until its next offensive series to score again.

Walters found a lane and dashed down the right sideline, 70 yards for a score and a 12-0 Truman advantage.

The Tigers, and Thomas, were not done.

Delp lofted a high throw for Thomas in the end zone on a 4th-and-14 at the 16, and the wide receiver went up and made the grab – in double coverage – to widen the gap to 18-0.

A nice throw and catch from Delp to Fant was good for two, making it 20-0 at the half.

“In the first half, we looked like a team that hadn’t practiced in 15 months,” said Panthers coach Ryan Nase, who guided Cheltenham to that state final appearance in 2019. “We really struggled to tackle. With the weather (last week) and having to practice on a parking lot because our field was snow covered, (it makes it tough). Everybody’s going through it.”

Cheltenham huddles after its game with Truman on Saturday, March 13. 2021. (Kev Hunter/MediaNews Group)

But in the second half, the Panthers came to life.

Thomas’ 20-yard TD reception and two-point catch boosted the margin back to 28-7.

The Panthers, however, struck back quickly early in the fourth.

Griffin found a streaking Amani Ezell down the sideline for a 73-yard touchdown catch that tightened things to 28-14.

After Delp hit Thomas for a 36-yard score, the Panthers marched 80 yards in seven plays, reaching the end zone on a one-yard sneak by Griffin.

A sack and fumble recovery in the end zone by Cheltenham’s Yaseer Jenkins brought the Panthers within 34-28 with 5:47 to go.

Cheltenham had the ball one more time and moved it to the Truman 16, but the Tigers came up with some key sacks to lock up the win, coming on a cold night on the turf on their home field.

“These kids fought their rear ends off in the second half,” Nase said. “We just didn’t have the consistency that we want. And then (Truman has) a kid who is one of the best players I have seen in a real long time, who, we couldn’t stop. This is our first game since the 2019 State Championship, but we don’t have many guys that played in that game. We have a lot of guys who played for the first time in their careers, and it looked like it.

“There’s no question (they can learn from this). And we needed a spark in the second half, and we put a freshman (Williams) in. He kind of gave us that life there. He’s little but he’s gonna have a heck of a career over the next four years here. He’s running behind a couple seniors and a sophomore lineman was in there too. We gotta play ourselves into shape and hope for some good things.”