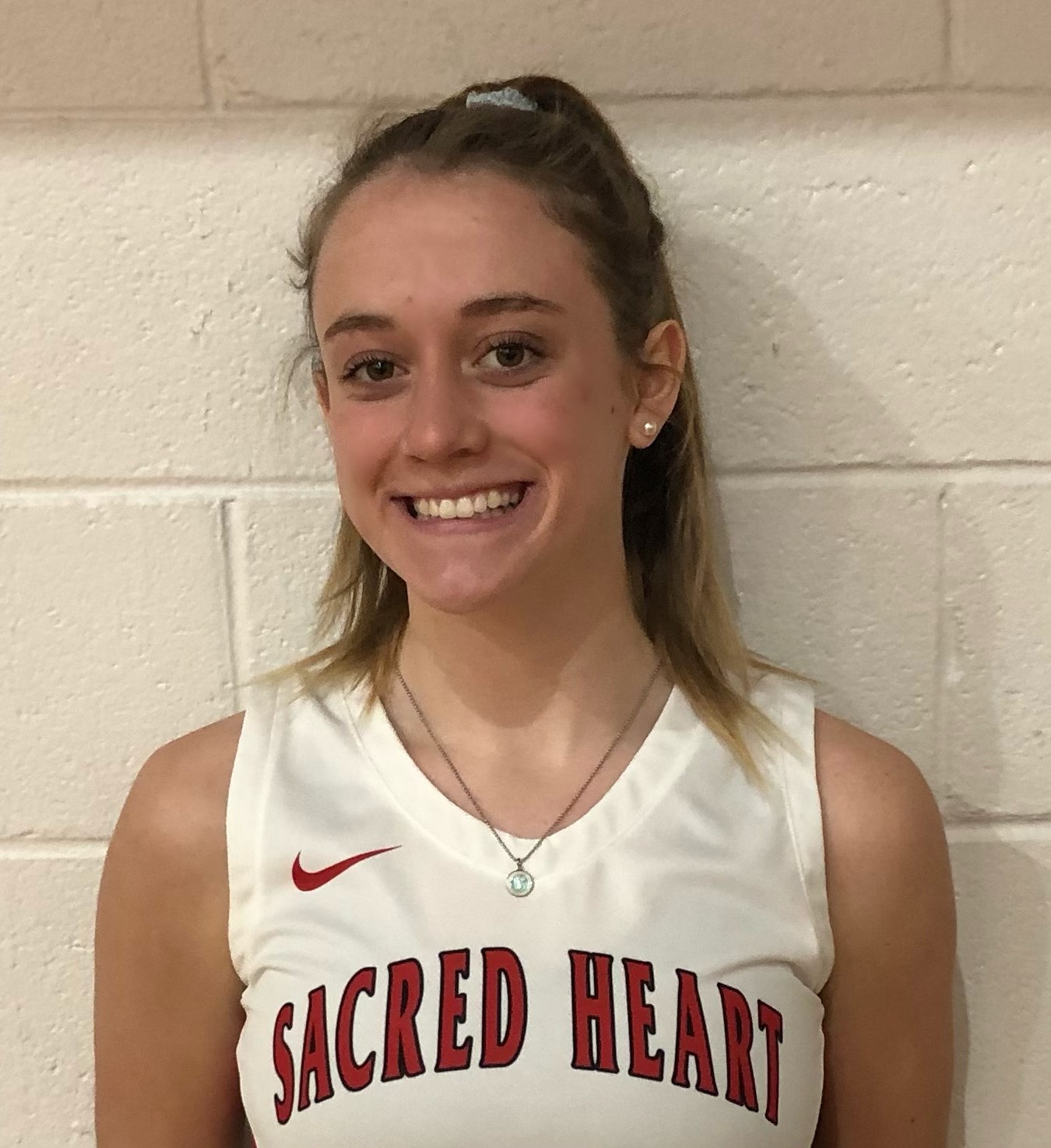 The junior guard, a three-sport athlete (cross country, basketball, track) has been a vital part of the Lions’ basketball success this winter (8-4, No. 1 seed in District 1 2A as of March 8) and keeps getting better. In her most recent three-game stretch (all victories), she tallied 63 points, 16 steals and four blocked shots; she is averaging 16 ppg in her last six contests (11.3 ppg for the season).

Sacred Heart Academy basketball head coach Zach Shuler said, “First and foremost, Kathryn is an unbelievable leader.  She is one of the first players to get to the gym and she’s constantly working on her game – shooting, rip drives, finishing at the basket, ball fakes.  The list is endless.  Kathryn is very coachable – always soaking up what she can do better.  She’s highly competitive – going hard in each and every drill.  She also is a great anticipator on defense – able to get in passing lanes and get steals.  She usually guards one of the opposing team’s best offensive players in our man defense and in our zone she is in the flyer spot in the back – almost like a free safety.

“Kathryn did not play basketball her freshman year – she transferred from Merion Mercy and wanted to concentrate on academics – and in her 8th grade year she was injured.  I didn’t know much about her as a basketball player but I did ask her to try out her sophomore year.  She decided to come to one of our fall league games during her sophomore year to just watch – it was our last game that fall.  She came dressed in leggings and tennis shoes.  We only had five players that game.  I asked her if she could be a sub during the second half.  She shrugged her shoulders and said sure.  Her first defensive possession she stole the ball and went in and finished a left handed layup.  I was like, ‘Well, it looks like we found our starting 3 guard.’”

Q: You’ve really stepped up your game this season, particularly in scoring, rebounds, steals and blocked shots. What area of your game do you feel you improved the most in the off-season?

A: I feel as if my scoring has definitely improved the most. I run year-round, which helps tremendously in my ability to give it my all every minute I’m on the court.

Q: Tell us a little about your off-season training and what challenges you faced in your training because of the COVID-19 pandemic.

A: During the off season, most of my training is in preparation for cross country season. When COVID hit and schools shut down, my two older brothers and I worked to clean out our garage and convert it into our own little gym. This definitely helped me build more muscle and strength. At the same time, I was training to run the Sea Isle City 10 mile run at the end of August, which helped prepare me for our fall league games. This helped get me back into my basketball routine and mindset.

A: My strongest aspects of my game are my rebounding and blocking shots. I may not be the tallest on the court, but I have definitely improved at reading the offense, especially their eyes as to where they will pass next. Having this as one of my strengths, I can get to the offender quickly enough to intercept a pass, or if she is going to catch and shoot, I can sense that and get there before she has the chance to shoot the ball. The aspect of my game I am currently working on is my shooting and consistently making my layups. I tend to miss the shots that should come easily, but practice makes perfect.

Q: Have you always played guard? Tell us a little about your start in competitive basketball. Who have been your most important basketball mentors; and what was the most important thing you learned from each of them?

A: I played on my grade school’s CYO basketball team but got injured in eighth grade and was not able to finish out the season. I began playing at Sacred Heart in my sophomore year. When I joined the team, we had three outstanding seniors who played very well together. I knew going into junior year with losing three key players, I was going to have to put in more effort for the team, show up every day ready to give it my all, and push my teammates to get better. Mr. Shuler is definitely one of my biggest mentors on and off the court. When I transferred to Sacred Heart my freshman year, he was my math teacher. As a teacher, he made it his goal to make it known that if my classmates or I had any questions, we should not hesitate to ask. As my basketball coach, he is constantly pushing me past my comfort level and is easily one of my biggest supporters. One thing that he has taught me, both on the court and in the classroom, is that it is okay to make mistakes. It is okay to miss shots and not have the perfect game. He constantly encourages me and wants me to do well. Mr. Shuler is without a doubt what makes Sacred Heart basketball so special.

A: My favorite basketball player would have to be Michael Jordan. I recently watched his documentary The Last Dance and what stuck out to me was, even as a young player, he told himself and others around him that he was going to be the best in the league. His persistent work ethic inspires me to always give it my all even when I don’t feel like it.

Q: You wear uniform jersey No. 24 Sacred Heart Academy basketball – why did you pick that number?

A: I had never played with this number before and thought, “Junior guard, number 24 Kathryn Gallagher” had a nice ring to it.

A: I stretch with my trainer before doing anything, shoot around for a few minutes, and then as a team, we do drills. I love listening to music to pump me up and loosen up before the game. Personally, I like to joke around and keep it light before game time.

Q: Do you participate in any other extracurricular activities at Sacred Heart Academy other than basketball?

A: I run on the cross country and track teams, and I participate in the Social Justice Book Club, the POP Culture Club, and the school yearbook.

Q: What is your favorite course at Sacred Heart Academy? What do you think you’d like to major in at college? Is there a career field that particularly interests you at the present time?

A: My favorite course is American Literature. My teacher is phenomenal, and two of the books we have read so far, Homegoing and The Great Gatsby, are surprisingly two of my favorite books I have ever read. I would like to major in special education in college and hope to pursue a career in special education. I have not decided what grade I would like to teach, but working with children who have autism for the past nine summers at the Kinney Center has been a real eye opener for me. At first I was hesitant towards the idea of working with children with special needs, but now my respect and love for these children is indescribable. I hope my future involves working and being with children with special needs.

Favorite book: Where the Crawdads Sing.

Person I most admire, and why: “The person I admire the most is my older brother Denis. He is currently a freshman at Boston College and runs on the track team. COVID has made his freshman year challenging, but recently he had an outstanding indoor track season placing top 10 in the ACCs for the 800 meter run. Despite all of the challenges he has faced freshman year, he never stopped working hard.”