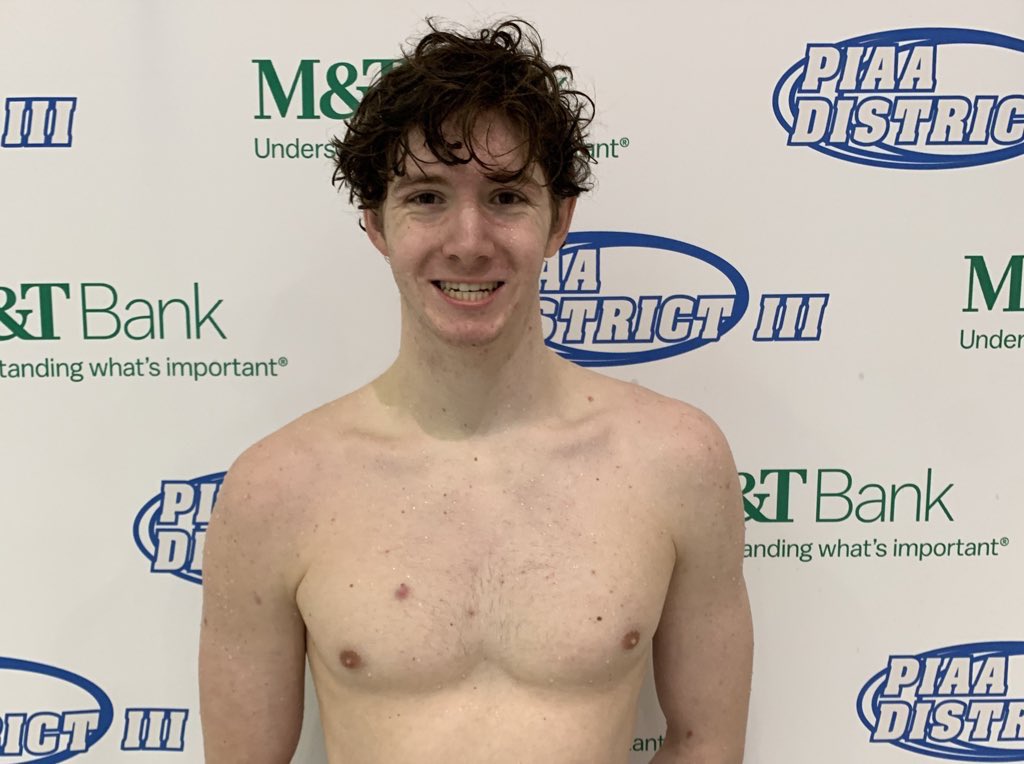 Daniel Boone senior Chris Guiliano broke his own records in the 100 and 200 free at Saturday's District 3 Class 3A swimming championships. (Courtesy District 3)

He made sure it stayed that way — breaking two of his own records and adding one more.

The Blazers’ senior was also part of Boone’s 200 free relay team with freshman Matt Ferenz, senior Jackson Peterson and senior Justin Eves. The group finished third in the event with a time of 1:28.33. Guiliano broke another record on the opening leg of the race swimming the first 50 meters in a time of 20.17 to beat the time of 20.19 set by Hershey’s Vinny Tafuto in 2013.

East AA >> Alan Alexander will give Pope John Paul II a Hershey presence and state-medal qualifier off his showing in Saturday’s East AA Super Regional at Pottsville.
Alexander, wrestling in the 152-pound weight class, faced off against Hamburg’s Dalton Gimbor for third place after edging Montoursville’s Isaac Cory, 2-1, in the consolation-semifinal round. Dropping into wrestlebacks after a quarterfinal-round loss, Alexander (15-3) got back on track with an 11-5 decision of Palisades’ Mason Smeland.
Alexander, a transfer from Boyertown, will become PJP’s first state medalist since Ryan Vulakh won a Class AA state championship at 152 two years ago.

Perk School wins two >> The Perkiomen School boys basketball goes by the nickname the Panthers, but this weekend they’ve been dubbed the Cardiac Cats.

Perk picked up a pair of tight victories to open the PA Cup at Westtown School, defeating the Moose 55-54 on Friday night before a last-second layup by Mitch Fisher gave the team a 66-64 win over Rocktop Academy on Saturday.

The Panthers will finish the tournament with a game against National Christian Academy on Sunday at 11 a.m.

Friday’s win against Westtown was the fourth time the two teams met up this season with Perk taking all four contests. Daouda Dembele paced the Panthers with 16 points on the night, his dominant play in the post and shot blocking giving life to a Perk team trailing, 29-22, at halftime and down as many as 13 in the second half.

Fisher added 10 points and Phil Byriel and Sam Pohlman both added nine, combining for five 3-point shots in the second half, to power the comeback win. Pohlman (14), Byriel (11) and Dembele (10) were the leaders for the Panthers in Saturday’s win over Rocktop Academy.

Spring-Ford, the top seed in the District 1 Class 6A field, kicks off its postseason against No. 17 Penn Wood at home on Wednesday.