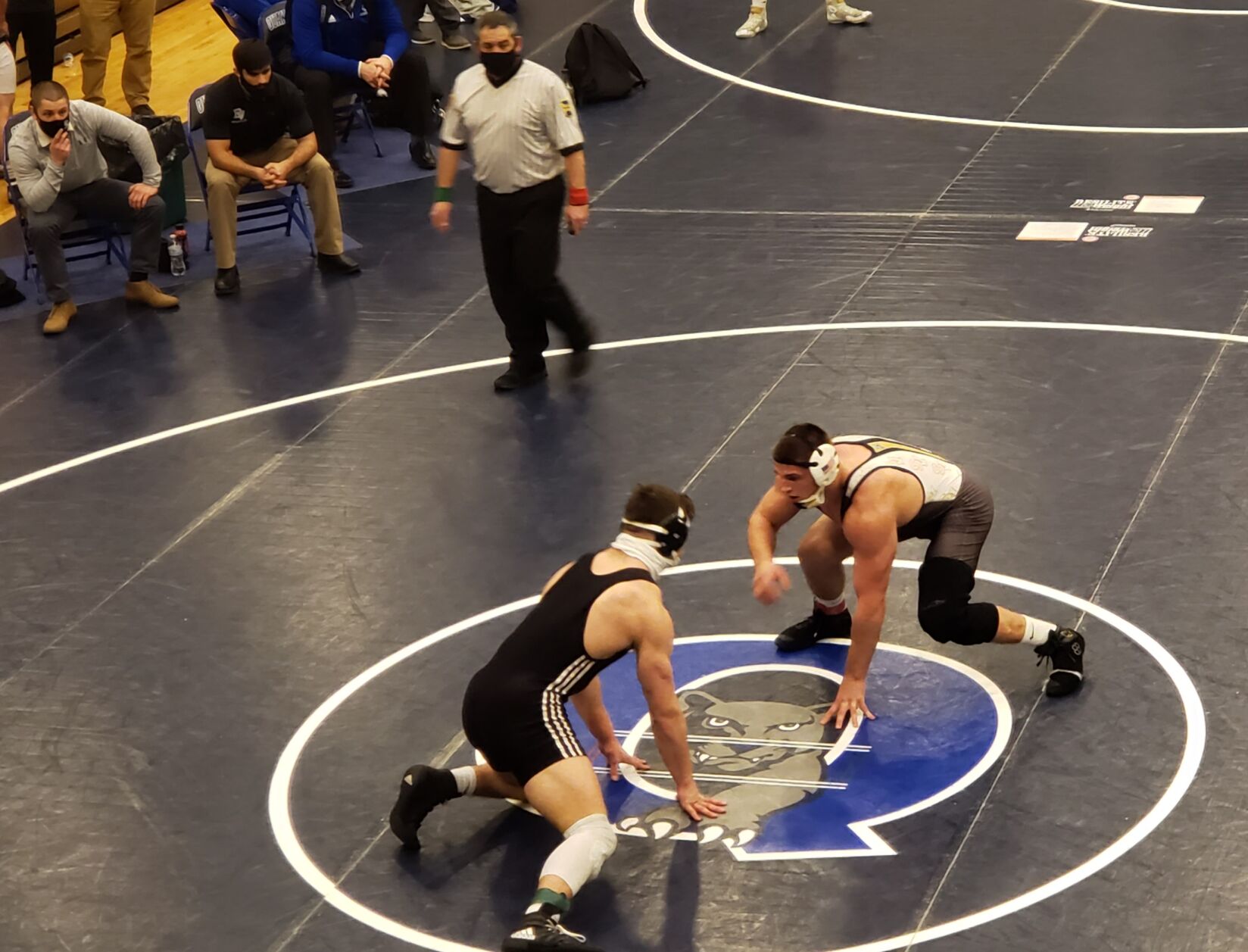 Sun Valley's Ryan Catka, right, faces off against Delaware Valley High's Jason Henderson in the 215-pound championship bout Saturday at the Class 3A East Super Regional at Quakertown High School. Catka decisioned the previously undefeated Henderson to win gold and pave his way to the PIAA Championships next weekend in Hershey.

QUAKERTOWN — Five Delaware County wrestlers fought their way through the Class 3A East Super Regional Saturday and on to the steps of the medal stand at the PIAA championships in Hershey next weekend.

Interboro High led the way with Nate Shippey and Dom D’Agostino clinching medals, doubling the school’s total since the sport began there. Though they were mildly disappointed, finishing fourth in their weight classes, they can right that next week at states, where eight medals will be awarded in each weight classification.

“I’m not unhappy with the way I wrestled,” D’Agostino said. “But I could have done better. I’m looking forward to next week and so is Nate. Two medals, we’ve only ever had one at Interboro so it’s cool for Coach (Dan) Tobin. He’s been here a long time. And it’s good because our guys have been working hard at practices, working all summer, taking this as our main sport and getting after it every day.”

While Ryan Catka of Sun Valley was the only Delaware County wrestler to get a gold medal at the East Super Regional, this really was considered the first phase of the states due to a change in format because of safety concerns with the coronavirus.

The other wrestlers qualifying for no worse than an eighth-place medal at the Giant Center are Chase Barlow of Strath Haven, who beat D’Agostino in the third-place bout at 152 pounds the week after D’Agostino defeated him in the regional, and heavyweight Julien Laventure of Upper Darby.

None of the Delco wrestlers were more dominating than Catka, who owned the 215-pound weight class, fighting off a challenge from previously unbeaten Jason Henderson (Del Val) in the championship round.

Catka defeated Dante Burns (LaSalle), 10-0, and Carl DiGiorgio (Central Bucks West) 7-2 to reach the final. Both were trying to survive.

Leg, arm, wrist, ankle, torso, waist, there isn’t a part of you that’s safe from being part of a Catka takedown.

Catka never trailed in the championship round, although it was tied a couple of times, and at the end of the match he gave his opponent the “broke him” sign – two fists turning opposite ways held high the way you would snap something with your bare hands. Henderson made that gesture after pinning Quinn Collins of Central Bucks East in the semifinals, according to an eyewitness.

“I feel like he was being a little, just, unsportsmanlike,” Catka said. “I guess it was just the tone of the match. He was kind of like egging me on. It was kind of stupid, I guess. Nothing really that you should take to heart. I just kept the pressure on. This feels good.”

Catka won gold at the regionals on his way to a third-place finish last year at states. He feels his best wrestling is ahead of him.

Barlow had to fight his way to the finish line with a 1-0 win over Kordell Waiters of Emmaus in the blood round. Then he got over on D’Agostino, who beat him in regions the previous week. Barlow already is on to states.

“D’Agostino, him and (Zac) Martin are the only kids that have beaten me this year and they’re both tough,” Barlow said. “It feels good but we’ve still got next week. I don’t want to go into that satisfied to have a medal, I want to win. Going in there with one kind of releases the nerves a little bit.”

Laventure lost, 3-1, to Matt Kruse (Easton) in sudden victory. To his credit, he didn’t blame it on the swollen eye he picked up earlier in the die, having been poked in it during a clinch.

“My head wasn’t in the best place, I lost a little focus,” Laventure said. “I didn’t wrestle my best. Definitely I’ll be ready next week. We’re going back in the room and practice 10 times harder.”

The East Super Regional format was split into two competitions, the 106 to 138 weight classes wrestling straight through in the morning, the 145 to 285 classes taking over in the afternoon and into the evening. In the morning session, Shippey was on the verge of elimination, trailing in his consolation semifinal match to Parrish McFarland of Pottsville.

Shippey battled back at 126 pounds before losing by fall to Beck Hutchison of Hazelton in the third-place bout. Next week he wants to move up the medal stand.

“Eighth place is an accomplishment,” Shippey said. “However, I want to place higher next week.”

Coronavirus changes to wrestling notwithstanding, those soon to be state placers will make this a season for Tobin always will remember.

“If you had told me at the end of the day we would end up with two medals, I’d be happy with that,” Tobin said. “As most teams would be. But we’ve got more work to do. We’re not done yet. It shows you what the program is becoming.”

Sam DiTrolio (189) of Garnet Valley and heavyweight Daetrel Jerome (Radnor) weren’t as fortunate in their East Super Regional debuts as they lost by fall in their first matches.

DiTrolio won his next bout in consolations to stay alive for another match, but his bid to medal at states ended by fall.

Jerome was body slammed by Max Harar of Council Rock North in the consolations, resulting in a win by injury default. Harar got Jerome off his feet and high in the air before dropping him on his head and neck.

Jerome was concussed and unable to continue, according to Radnor coach Justin Schellenger. In the next round Jerome would have wrestled Laventure, who lost, 3-1, to Cameron Butka of West Scranton in the championship semis. Laventure moved on by default.

Shippey fought his way to a medal after being beaten, 6-5, in the first round by Patrick Snoke of Northampton.

The last Bucs wrestler to medal at states was Adam Parcell, who was eighth at 215 pounds in 2003.

Less fortunate in the morning session of the Super Regional were Delco wrestlers Cole McFarland (106) of Haverford, Matt Ricci (120) of Garnet Valley and Helton Brunner (132) of Strath Haven.

Brunner (14-6) had to pull out of the Super Regional after swelling in his knee Friday.

While no fans were allowed at the regions or super regional, wrestlers have the opportunity to purchase six tickets each for the state tournament.