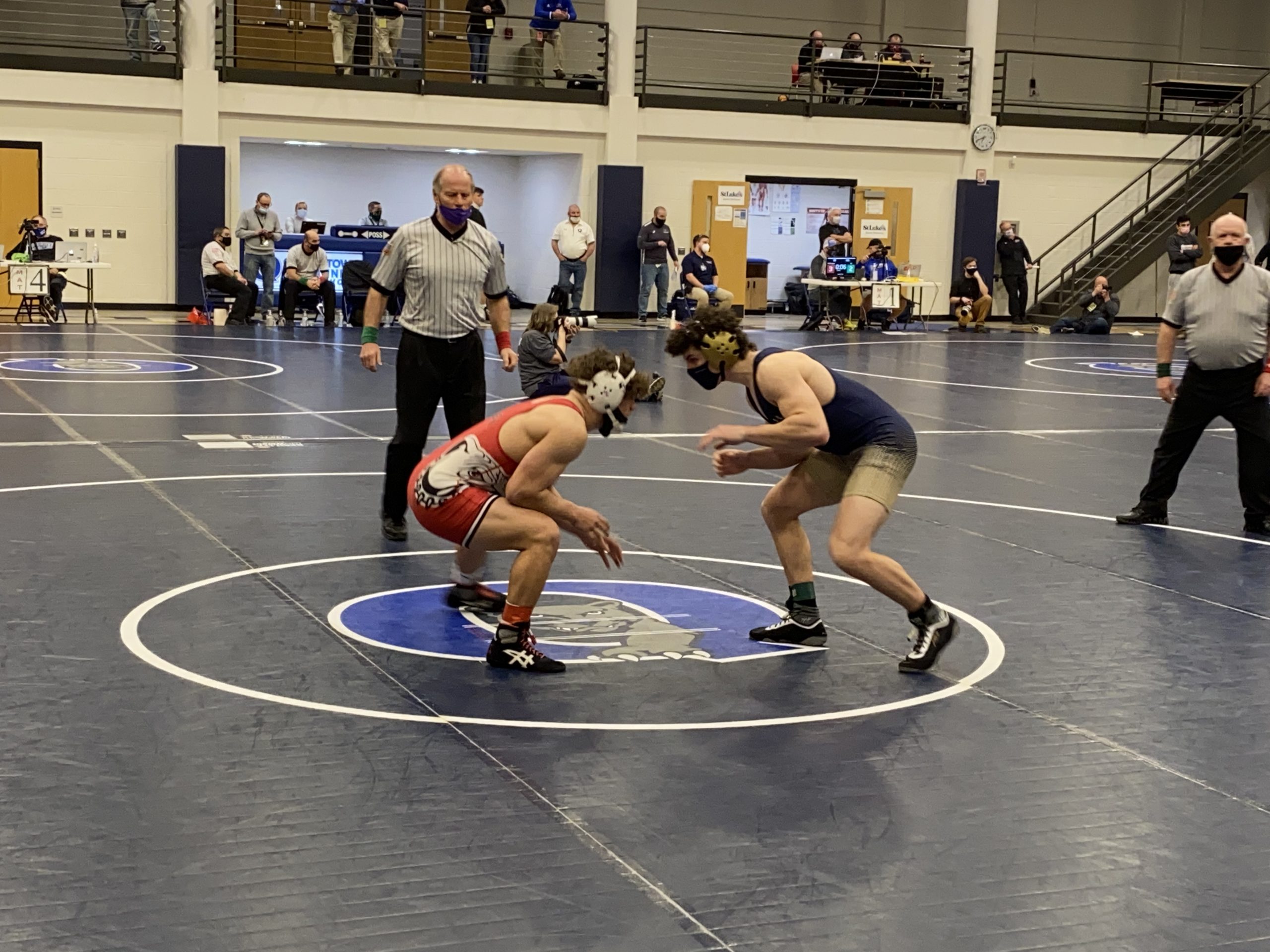 QUAKERTOWN >> La Salle’s Regan Loughney did not mind wrestling with a bit of anonymity.

But it was hard for the senior to remain inconspicuous with his performance Saturday at the PIAA Class 3A East Super Regional.

“Junior year I didn’t wrestle the postseason cause of the transfer (from Bishop McDevitt) so coming in here I know nobody who I am,” Loughney said. “They don’t even know how to pronounce my name on the videos and stuff but that’s the way I like it.”

Coming into the 172-pound bracket the fourth seed out of the North East Regional, Loughney earned a spot at the PIAA Championships by knocking off Lower Merion’s Jack Lledo and Downingtown East’s Matt Romanelli and ended his day at Quakertown High School by taking second place in the class.

“I knew if I came and wrestled my matches, wrestled my best I could beat anyone,” Loughney said. “So just coming in, just ignore all those numbers, they’re just numbers on a bracket.”

Loughney was one of three area wrestlers to secure a spot on the state 3A medal stand as the top four East finishers join the top four from the West Super Regional to compete at the Giant Center in Hershey Saturday, March 13.

“It just shows the hard work I’ve been putting in. I wanted it really bad. But now that I have it, I got to go make it every better. I got to go as high as I can on the podium next week.

“Freshman year, same spot here finished fifth at the section tournament, lost to (Quakertown’s) Dom DeFalco in the blood round. All the kids that took top four here ended up going to states so that was just frustrating and I worked, I got to states last year. I didn’t want to not make it to the podium this year.

Loughney, who clinched his first state medal and La Salle’s first since 2018, opened Super Regionals by handed South East champ Lledo his first loss of the season, winning their quarterfinal contest by an 8-4 decision.

“After that first period it was 0-0 but I knew going into the second period I had that match,” said Loughney, a resident of Elkins Park. “Just turned up the offense and everything felt good – my shots felt good, my offense felt good, defense felt good so it all just kind of went in my favor from there.”

In the semis against Romanelli, Loughney trailed 5-3 entering the third period but his escape and a second stalling call on Romanelli tied the match 5-5 and sent it to sudden victory, where a scramble ended with Loughney on top for two points and a 7-5 victory.

“I remember him coming out the back door and I’m really confident there and defensively in those scrambles,” he said. “So I grabbed that ankle and I was just rolling through, doing muscle memory, I don’t really know what I did but I know I ended up on top.”

Loughney run at gold was denied by Easton senior Dominic Falcone, the two-time state medalist besting the La Salle senior 7-0 in the 172 final.

“He earned that win,” Loughney said. “So it was tough with that Russian and his underhook and everything, trying to get my offense going when I’m worried about getting tied up up there and it’s hard to get in on his legs when stuff like that’s going on.”

Morrow edged Whitehall’s Xavier Arner 2-1 in the 145 quarters to get at rematch with Bensalem’s Connor Eck, who bested the NP junior in the District 1-3A North final at Quakertown two weeks prior. Morrow led the semifinal 3-1 in the third but Eck got a late takedown on the edge of the mat then collected another takedown in sudden victory to beat Morrow 5-3.

“Perfect example of not looking at the time and just wrestling,” Morrow said. “He gave me a stall call, looked at the clock, 10 seconds left, I thought we were out of bounds and he got that two – I thought he was out of bounds, both his knees were in. Tied the match up and got a nice takedown in overtime.

“That’s frustrating both me and my coach were very frustrated with the way I ended the match but you know, learning experience I got to move on.”

Morrow bounced back to qualify for Hershey by pinning West Chester East’s Andrew Luke in 33 seconds in the consolation semis. It was Morrow’s third win over Luke this postseason, having beaten him twice at the South East Regional.

“After the Eck match, I was definitely frustrated,” Morrow said. “Coaches told me before the match, I just got to me saying, ‘Go, go, go,” in my head and that’s what I did and I got the job.”

In the bout for 145 bronze, Morrow dropped a 1-0 decision to Northampton’s Dagen Condomitti.

“I think it’s just hard work,” DiGiorgio said. “Last year I wasn’t quite there. I was kind of satisfied just making it. This year, one step higher, next year I’ll take another step higher. That’s really all it is.”

The Bucks junior started with a 7-6 decision over Hazleton Area’s Seth Hunsinger in the quarters before falling to eventual champ Ryan Catka of Sun Valley 7-2 in the semis.

For a spot in states, DiGiorgio faced Council Rock South’s Lucas Doyle having a week earlier defeated Doyle 11-4 for third at regionals. Saturday’s rematch was a tighter affair but DiGiorgio again came out on top, winning by a 3-2 decision

“They definitely had me scouted this time, they definitely did their homework,” DiGiorgio said. “But I think I just wanted it more. That’s what it comes down to in these tournaments – will.”

Pennridge freshman Sam Kuhns bid for states ended with a third loss this postseason to Mason Ziegler of Quakertown, who bested Kuhns 4-2 in their 113 consolation semifinal. Kuhns went on to earn fifth with a 6-2 decision over Northampton’s Austin Noe.

“I was kind of sad after I lost the one to make it to states” Kuhns said. “But I just I had to finish strong since it’ll probably be the last match of my freshman year so I wanted to end on a good note.

Alderfer, who beat Kreidler by the same score in the South East Regional final, secured his second PIAA medal, having placed eighth at states last season at 120.

The PIAA 2A Championships is Friday, March 12 at the Giant Center.

Pope John Paul II junior Alan Alexander qualified for Hershey by placing fourth at 152. Alexander lost in the quarterfinals but rebounded with two consolation wins before falling 8-6 in sudden victory to Hamburg’s Dalton Gimbor in the bronze medal match.