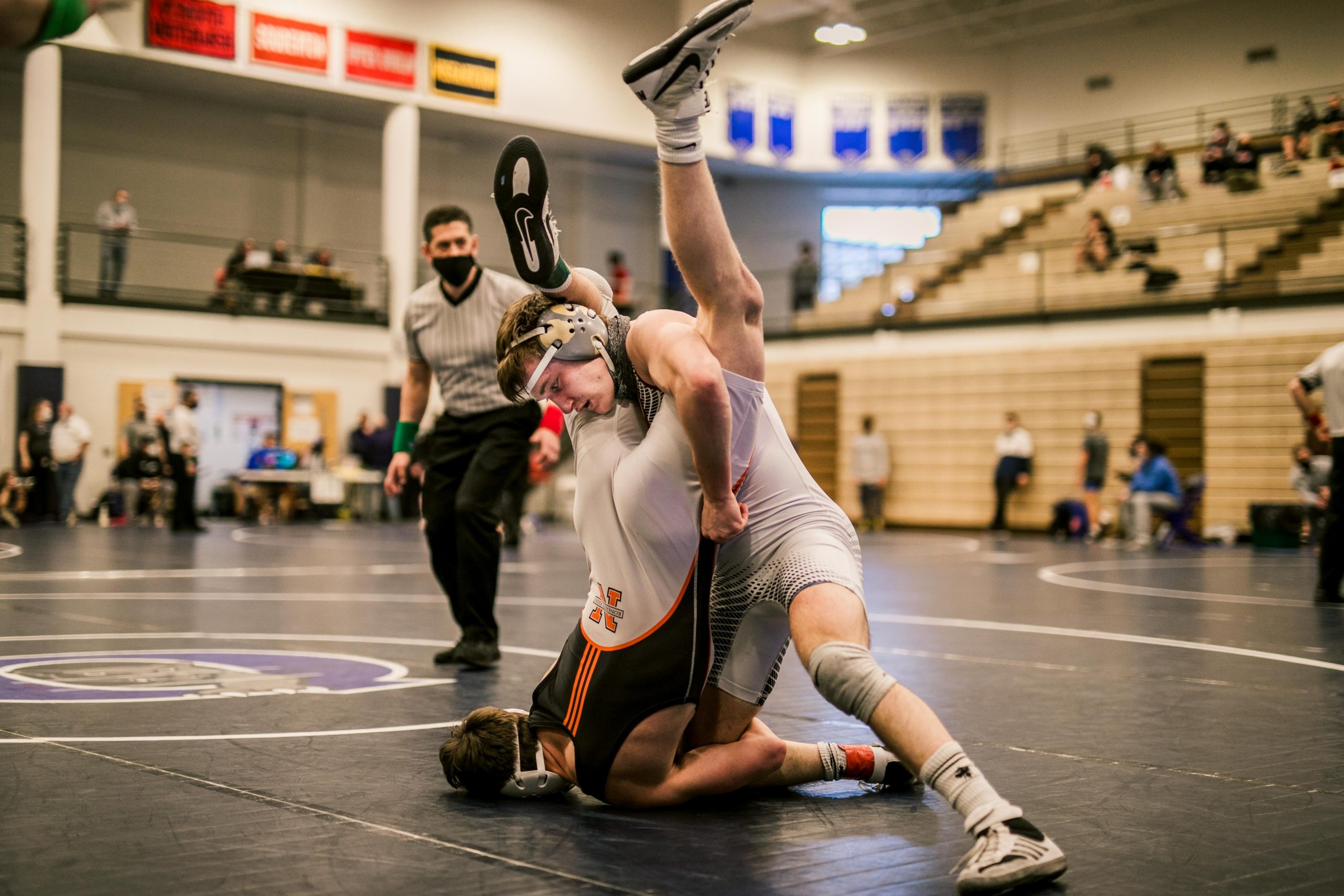 QUAKERTOWN >> A week ago Sammy McMonagle missed out on a chance to become West Chester Henderson’s first regional champion since 2005.

Saturday, McMonagle did something no one else in school history has ever done, and got some revenge along the way.

With a 3-2 win in the 145-pound finals, McMonagle reversed his finals loss to Bensalem’s Connor Eck to win a title in the first (and hopefully only) East Super Regional tournament, at Quakertown High.

“Obviously it’s a great accomplishment and I’m glad to avenge that loss last week in the finals and get that big win in the semis,” McMonagle said. “The job’s not done. Next week is what really counts.” West Chester Henderson’s Sammy McMonagle works on a takedown attempt against Bensalem’s Connor Eck in a 3-2 win in the 145-pound final. (Nate Heckenberger – For MediaNews Group)

The top four placers from the East clinched spots on the state podium, joining the top four from the West in Hershey, next Saturday. McMonagle was one of seven from the Ches-Mont League to accomplish that feat, along with Downingtown East’s Keanu Manuel (120 pounds) and Matt Romanelli (172), Downingtown West’s Dom Findora (126), Coatesville’s Nate Lucier (132), Kennett’s Trent Kochersperger (138) and Sun Valley’s Ryan Catka (215).

McMonagle looked determined from the get-go, with a second-period technical fall in the quarterfinals, and then a 3-1 decision over Northampton’s Dagen Condomitti.

“It was kind of a wakeup call,” McMonagle said of his first loss of the season. “I hadn’t been pushed like that since late summer or fall. It lit a fire under me at practice because I know what I’m capable of and knew I could get that match back.” The Ches-Mont claimed three of the five titles for District 1, who went up against the powers from District 11, District 2 and District 12.

Lucier won the first gold of the day, in dramatic fashion. Bethlehem Catholic’s Matt Mayer led 9-3 in the third period, but was dealing with a cut above his right eyebrow. Mayer needed blood time four times to have it wrapped, and Lucier took advantage of the loss of momentum, scoring a takedown and a pair of near-fall points as time ran out to win, 13-11.

“We practice scenarios like that,” Lucier said. “I just try to keep level-headed and think about the score being 0-0 and stay focused and keep going.” Findora cruised to the finals with a technical fall and a major decision, but got thrown by BECA’s Tyler Kasak and was pinned in the second period. Despite the finals outcome, Findora will wrestle in Hershey for his third straight season, this time with that first medal reserved for him.

“It’s a big milestone, but it’s not my ultimate goal,” Findora said. “It’s a huge milestone, after the past two years, not being able to accomplish it. I’m not satisfied with just top eight, though. I’m going to keep working and keep improving to get to my ultimate goal.” That was the prevailing theme for those fortunate enough to extend their seasons one more week.

Kochersperger became the first wrestler to lock up a state medal since Kyle Bove in 2009. After a 3-1 loss to eventual champ, Kyle Hauserman of Council Rock North, in the semis, Kochersperger used a trademark headlock to secure a win in the blood round. He fell to Boyertown’s Chance Babb, and settled for fourth, but knowing he’ll climb the podium next week negated any disappointment.

“It means a lot,” Kochersperger said.” It’s a big testament to all the hard work I’ve put in the last 13 years of wrestling. I worked too hard and now it’s paying off.” Downingtown East got its pair through, but sure did it the hard way. Manuel dropped his quarterfinal bout before beating Oxford’s Cannon Hershey. In the blood round, Manuel gave up a takedown in the third to Bethlehem Liberty’s Javien DeLeon, to trail, 3-1. DeLeon then suplexed Manuel and was called for an illegal slam. Manuel was ruled unable to continue and was awarded the win. He finished fourth. Romanelli, on the other hand, got off to a hot start but upending Nazareth’s Sonny Sasso in quarters. He let a 5-3 lead going into the third slip away and dropped his semi against La Salle’s Regan Loughney, but rallied to beat West Chester Rustin’s Marek Seaman to place.

“It means a lot to me,” said Romanelli, who finished fourth. “I feel like my career didn’t go the way I wanted it. I thought I was good enough to make states as a freshman. My sophomore year I got injured and last year I just whiffed. It feels good to be moving on and I’m looking for a higher medal. I’m looking to do some damage.”