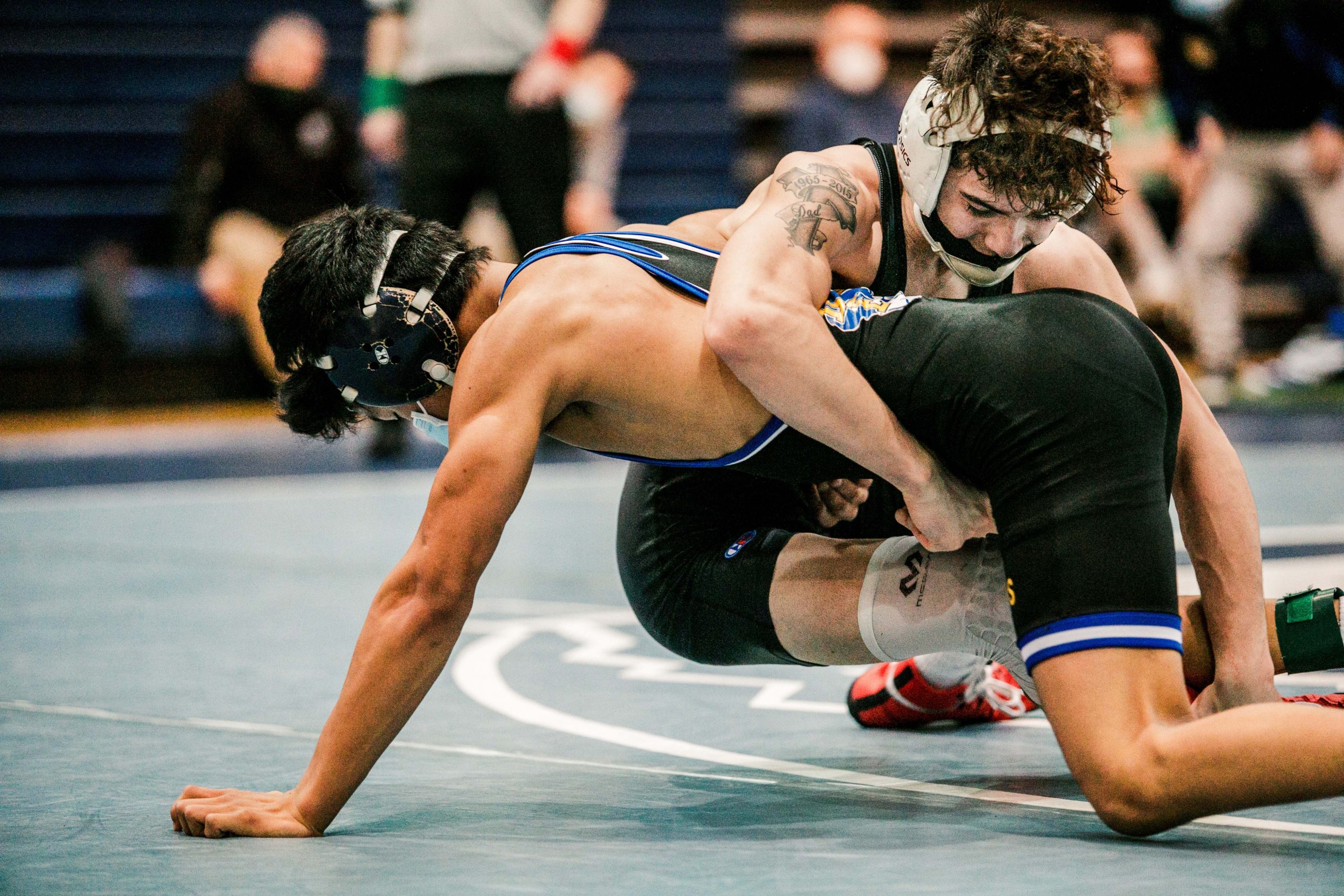 They have varying degrees of exposure to state-level wrestling.

But Boyertown’s remaining three postseason grapplers — Jay Maldonado, Chance Babb, Gavin Sheridan — are united in their desire to finish the coronavirus-impacted 2021 season as high on the medal podium at Hershey’s Giant Center as possible.

The first step for them, and nine other area wrestlers, takes place Saturday at Quakertown. The Pa. East Super Regional pits the top four from last weekend’s South East AAA Regional tournament against those from the North East AAA Regional for three rounds of competition comparable to the first two days of states in normal years.

The final-round bouts, known as the “blood round” at states for deciding medal qualifiers, will determine the top four placers in each weight class for the second phase of states at Hershey’s Giant Center the weekend of March 12-13. The big rewards include more than just getting to Hershey; the qualifiers will be awarded medals and assure themselves they will score state medals.

“I want to medal … to succeed more,” said Babb, a two-and-out at the 2020 state tourney. “Last year at Hershey was overwhelming.”

The close of his 2020 wrestling season left Maldonado with two bits of unfinished business this season. His blood-round loss at 113 left him at the 99-win mark for his scholastic career and left him short of a second medal finish at states.

Jay finished the one bit of business in his first match this winter, scoring a 4-0 decision against Upper Perkiomen. He is now at least two wins away from taking care of the second item, starting with a bout against Bethlehem Liberty’s 120-pound Javien DeLeon.

“I want to get on the podium as high as I can,” said Maldonado, an eighth-place medalist at 106 his sophomore season. “The coaches are pushing me to the end of the season. My mentality is to make it out of the Super Regional, wrestling my style of match.”

Maldonado (12-1) was runner-up at the South East regional, extending Downingtown East’s Keanu Manuel to a 3-1 sudden-victory outcome in their title match. The result of his previous state tournament finish has prompted more focus on certain aspects of his style.

“I’m pretty tough on top,” Maldonado said. “I want to be able to ride kids out.”

Babb (11-2) also finished second at regionals, topped by Council Rock North’s Kyle Hauserman in the 138-pound final. He’s looking to improve on last year’s DNP (did not place) showing at Hershey, starting with his opener against Bethlehem Freedom’s Connor Bevan (8-4).

Babb, for his part, lauded the influence of “new” head coach Tony Haley, who took over a program for which he logged 11 seasons (2008-2019) in an assistant’s capacity. He led the Bears to a 6-1 dual-match season, a second-place finish in the Pioneer Athletic Conference’s Liberty Division and Top Five team showings at districts and regionals.

“He’s not just a coach. He’s like a parent,” Babb said. “He wants everyone to be their best.”

Sheridan is a newcomer to state wrestling. But the freshman 106-pounder compiled an impressive 48-5 record at Boyertown Middle School-East, and he’s 11-2 this year with third-place medals from the District 1-AAA South and South East AAA Regional tournaments.

“In junior high, I entered a lot of tournaments,” he said. “That was good for me. It was a big step up from youth wrestling. I needed matches.”

Sheridan (12-2) gets his first state-level action under way by facing Abington Heights’ Luke Sirriani, the North East AAA Regional’s second-place finisher. Sirriani, a sophomore, comes in with a record similar to Sheridan’s (13-2).

“I kind of wanted more matches,” Sheridan said, “but I knew that wasn’t going to be easy. I just practiced more and worked to be prepared for the postseason.”

The super regional provides Spring-Ford’s sizeable contingent another opportunity to pad its season-long success story. The Rams advanced their entire quintet through the regional, coming away with three champions along with third- and fourth-place finishers.

Spring-Ford’s two unbeaten senior champions — Jack McGill at 160 (16-0), Joey Milano at 189 (12-0) — have a combined three state medal finishes between them. Milano placed fourth each of the past two years, and McGill was seventh after two times with DNP outings.

McGill starts the super regional by taking on Pittston Area’s James Spindler (14-3) while Milano opens against Bethlehem Catholic’s Anthony DeRosa (9-3). They were both fourth-place medalists at the North East AAA Regional.

Team scores will be calculated, though there will be no trophy presentation to the leading school. The day’s activities will include awarding of the District 1 Outstanding Wrestler trophy to Bensalem’s Connor Eck, the 145-pound champion.

The postseason tournaments staged locally this winter have been known for their schedule variations as much as their levels of competition.

The Quakertown super regional will have its own unique layout.

The tourney will consist of two sessions, both running straight through in the day and the evening. The plan is for the six lightest weight classes (106, 113, 120, 126, 132, 138) starting off with quarterfinals at 8:30 a.m., with subsequent rounds — semifinals, two rounds of consolations, final rounds — running through to their completion. Following that session, the gymnasium will be cleared and mats cleaned for the second session to start at approximately 3:30 p.m.

The heavier weights (145, 152, 160, 172, 189, 215, 285) will be competing in the later session, which will also place wrestlers in the first through sixth spots. Parades of Champions will precede the championship and consolation finals in each session, with the 5/6 place bouts immediately following the consi-semifinals.

East AA >> He’s over the hump. and a big prize is more within his grasp.

Alan Alexander’s two previous post-season forays ended at the Class AAA regional level, achieving those results as a member of the Boyertown mat program. This year, with his transfer to PJP and subsequent move to the Class AA level, Alexander has made his way to the state level.

The junior 152-pounder will be venturing to Pottsville for the East AA Super Regional. He kicks off his trek for PIAA hardware by facing Devon Deem, a junior from Montgomery who sports a 31-2 record and silver medal from last weekend’s North East AA Regional.

Alexander (13-2) worked his way back from a quarterfinal round loss to place third at 152. A 10-9 loss to Boiling Springs’ Michael Duggan, the bracket’s eventual silver medalist, positioned him for a 3-0 run that qualified him for the super regional.

Alexander’s regional rally started with a 4:10 pin of Northern Lebanon’s Kayden Clark and a 14-5 major decision of Palisades’ Mason Smeland. In his third-place bout with Notre Dame-Green Pond’s Joseph Lapenna, Alexander pulled out a 4-3 decision.

West AAA >> They will be taking the scenic route to the PIAA Class AAA Tournament.

Daniel Boone’s Tucker Hogan and Stephen Spitko find themselves going to Hershey by way of Altoona, site of Saturday’s West AAA Super Regional. A 12-hour round trip for a maximum four hours of wrestling on which they will pin their hopes for medal finishes at the Giant Center next weekend.

Tucker Hogan, a runner-up at the South Central AAA Regional, will compete at 120. The Boone freshman (18-1) will face Kiski Area senior Sammy Starr, (34-3), the South West AAA Regional runner-up, in the first round.

Spitko, coming off a third-place finish at South Central, will open action at 120 against Franklin Regional senior Carter Dibert. Spitko (15-2) takes on a wrestler sporting a 30-0 record this year (145-15 career), a two-time state medalist who was champion at 106 during the 2018-19 season.