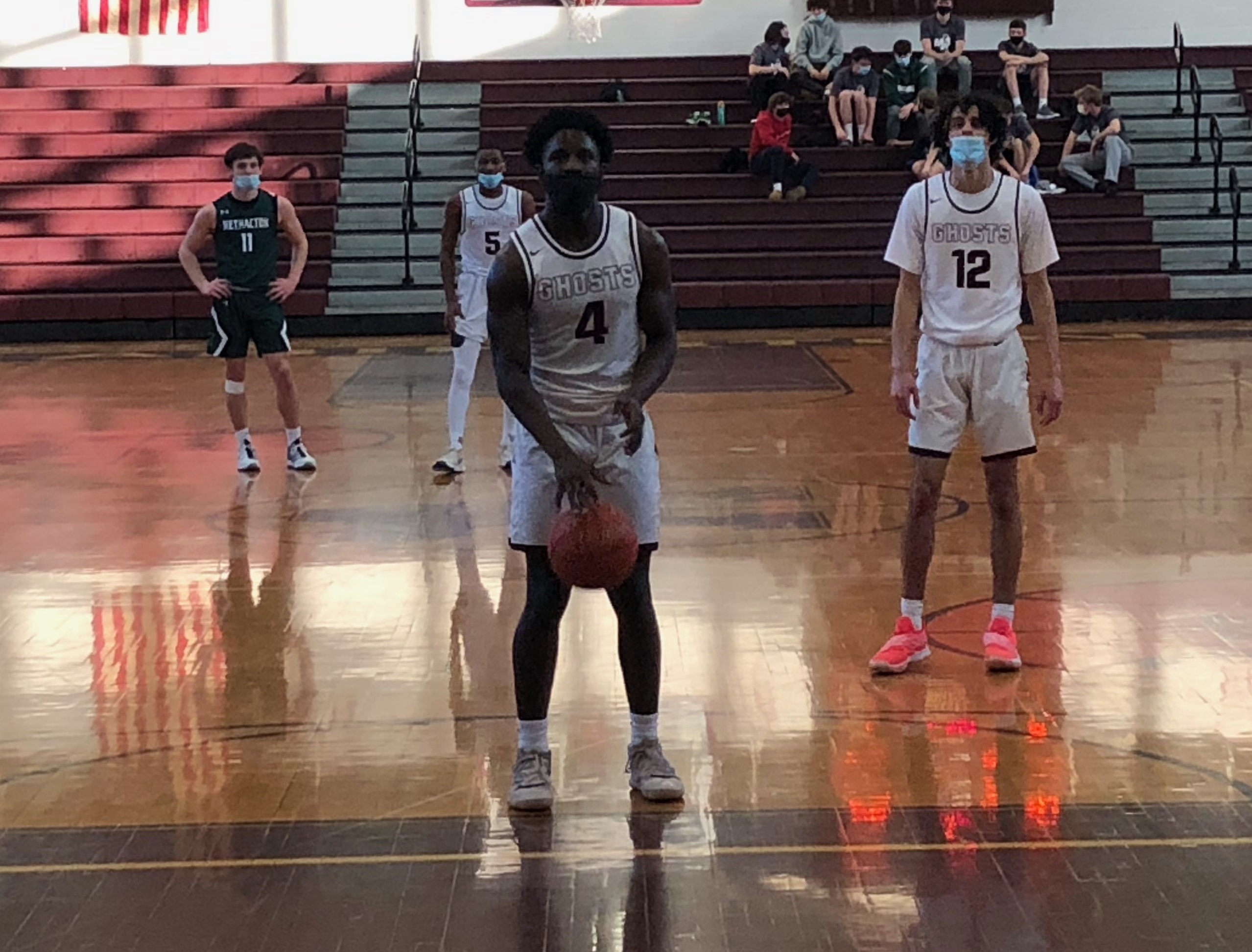 Abington's Oreck Frazier lines up a free throw during the Ghosts' game against Methacton on Wednesday, March 3, 2021. (Andrew Robinson/MediaNews Group)

ABINGTON >> It was the last chance to have another chance.

Entering the day holding a District 1-6A playoff position but from having it secured, the Abington boys basketball team had an opportunity to erase any doubts against a Methacton team that had its spot shored up. It hadn’t been the season Abington envisioned but a win over the Warriors would give the Ghosts the same clean slate the other 19 playoff qualifiers would get starting Saturday.

A strong start, coupled with tenacious defending led by seniors Rob Bell and Oreck Frazier pushed Abington to a 51-41 win Wednesday afternoon, essentially securing a place at the postseason table.

“This time of the year it’s all about effort,” Abington coach Charles Grasty said. “What can you go out and do? The legs aren’t under you but it’s about what you have left in you.”

Frazier, a powerful senior forward committed to Harvard for football, found Bell for a 3-pointer to open the game and sparked an 8-0 run that set the entire tone for the afternoon. Connor Fields and Antoine Ellis, who also played excellent defense during the game, followed with a two and three respectively to prompt a quick timeout by the Warriors less than two minutes into the game.

Facing an early deficit and with Abington (9-5) giving guard Brett Byrne and forward Cole Hargrove its full attention defensively, Methacton (10-6) had an uphill climb to make. The Warriors didn’t play poorly, but a spat of turnovers in the third quarter and a handful of missed opportunities added after the slow start.

“We dug ourselves into a hole and when you’re down like that, you almost have to play perfect basketball to get back from it,” Warriors coach Pat Lockard said. “That’s a very grueling task to ask a team to do. I thought we played pretty close to get back into it, but credit to them, they came out and pressured us and forced us to get into the attack mindset we should have had to start the game.”

Bell had eight points in the opening quarter as Abington built a 15-8 lead. In the second, Methacton started to punish the Ghosts on the glass, and six straight points from Hargrove cut the score to 17-14 with 5:16 until halftime.

“He’s a really good player, so I had to be really physical with him especially in the second half to try and shut him down and take him out of the game,” Frazier said. “I just let him know I was there and I was guarding him physical.”

Bell spent much of the game chasing Byrne around the floor, getting some help from Ellis just to give some different looks defensively and tried to make sure the Warriors sharpshooter didn’t get any room to fire freely.

Byrne didn’t score in the first half, but Abington only led 21-16 at the break with Methacton missing a couple shots at the rim that could have cut the lead down further.

Wanting to put their defense to better use, the Ghosts came out aggressive in the third quarter with Bell and Frazier combining for 14 of Abington’s 16 points in the quarter. Bell had three steals in the frame, turning all of them into layups.

“We just wanted to play solid defense but also wanted to turn up the pressure,” Bell said. “Starting out fast like we did in the first half, we had to do that all four quarters so it was easiest for us to do that on the defensive end.”

Bell finished with a game-high 20, racking up nine of those points in the third. The guard used a pair of free throws and a traditional three-point play of his first steal to give Abington a 10-point lead out of the third quarter gate and his final steal-into-a-hoop gave the Ghosts their largest lead at 37-23.

“We played something like five games in seven days, I know everybody is doing it but I could tell our guys were getting a little tired and didn’t have their legs under them as much the past few games,” Grasty said. “We met this morning and talked about throwing all those games away and getting a fast start. Methacton is very good, they’re hard to game plan for and we needed a start like that.”

Methacton was able to adjust going into the fourth, setting ball screens further up the floor to limit its turnovers which in turn freed up some looks. Byrne hit a three with 3:30 left that chipped the Ghosts lead down to 41-36 with 3:30 to go but the Warriors hit a cold spell over the next three minutes.

With the Ghosts in the bonus and making free throws, Methacton missed four straight 3-point shots before Hargrove hit one with 44.8 left to give the visitors a glimmer of hope.

Abington however, was solid at the line down the stretch, hitting 10-of-16 and turning one of the misses into an offensive board by Fields that led to two more freebies. The loss was disappointing for the Warriors, but didn’t knock them out of the postseason and they got a look at what it will take to advance out of Saturday’s opening round.

“We found spurts of really good basketball out there, we just couldn’t finish those runs so those little plays add up at the end of the game,” Lockard said. “I told the guys that as bad of a feeling as this is right now, this is not the last game you get to play. Embrace this, feel this and use this as we prepare for the first district round.”

A year ago, Abington went into the district tournament and lost a road game to end its season. The immediate result of Wednesday’s win put the Ghosts in line for a first round home game, but wherever they end up, they’re ready to make some noise.

“We plan on going all-out on the court,” Bell said. “We’re going to shock the district.”