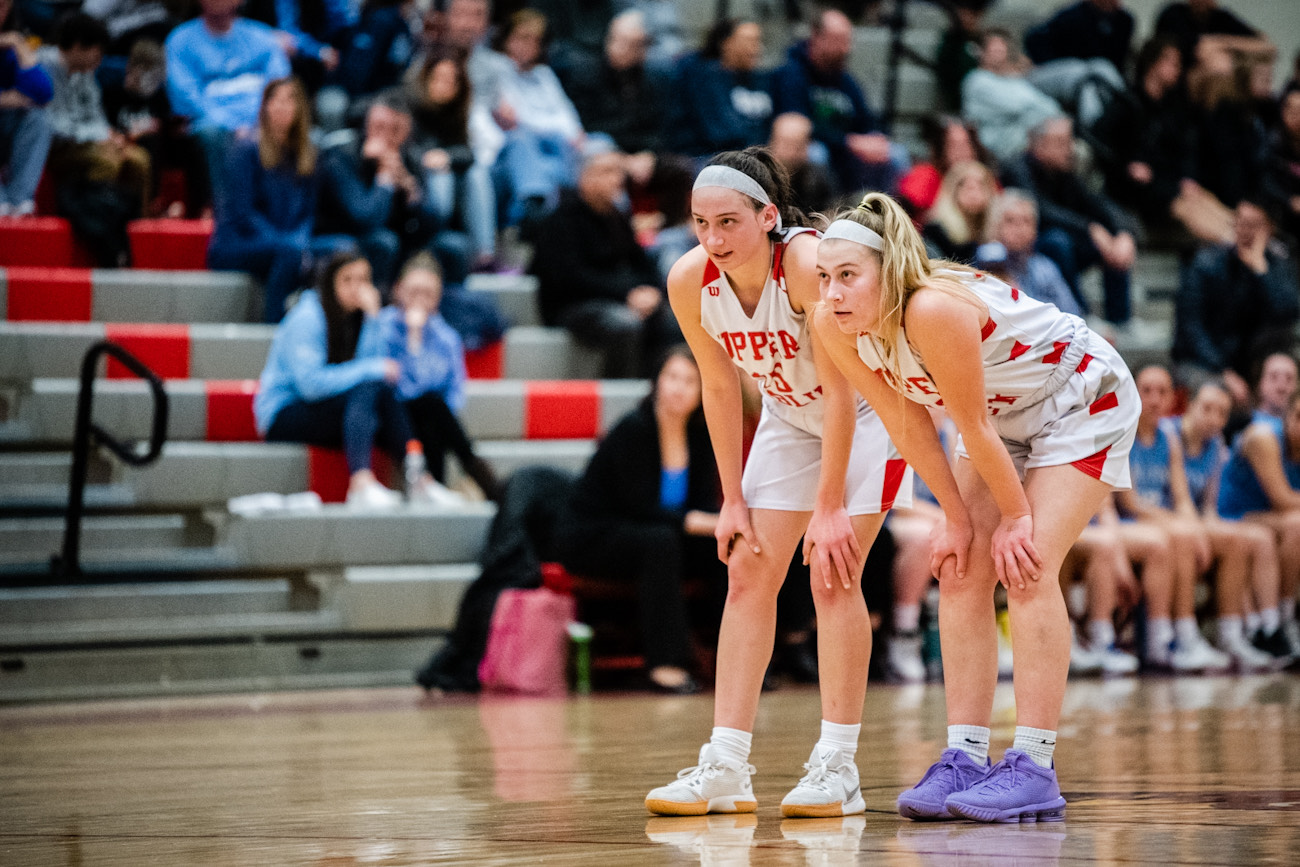 Upper Dublin’s Jess Polin (15) and Dayna Balasa (32) stand at half court during a free throw attempt in the waning seconds of the game against North Penn in the District 1 playback game during the 2019-20 season. (James Beaver/For Media News Group)

The Upper Dublin senior, who has dished out more assists than anyone else in the history of the Cardinals girls basketball program had been asked how many of those assists had gone to classmate Dayna Balasa, the program leader in 3-pointers.

No matter what the actual number is, the seniors are a record-setting duo for Upper Dublin and along with classmate Sarah Eskew, have played a key part in the team’s success the past four years.

“They’re not feeling any type of pressure and just having fun,” Cardinals coach Morgan Funsten said. “I’ve been around long enough that I’m surprised by anything they’re doing in terms of their mental focus or their bounce-back ability. They’re just so special, we’re trying to cherish our time together because this is a once-in-a-lifetime group.”

Polin was up to her usual act in Tuesday’s 43-36 win at Souderton, dishing out seven assists including one that led to a 3-pointer resulting in Balasa scoring her 1,000th career point. She may have been on to something, as all three of Balasa’s scores on Tuesday came off passes from her longtime teammate.

They started out on an Upper Makefield Heat team that collected some of the area’s top players on its roster, then stayed together for three years at Sandy Run Middle School and came to Upper Dublin as freshmen starters on an eventual state championship team.

“We’ve been playing together since we first started playing so it’s definitely special,” Polin said. “The fact we’re both top in something at the school is really cool and we’re looking forward to finishing out the season together.”

Both seniors have committed to play at the next level. Polin, who has more than 600 points and 400 rebounds on top of her pile of assists, has signed with East Stroudsburg. Balasa has committed to USciences.

Funsten pretty much chalked up the milestone basket as a given before Balasa even touched the ball.

“She’d already made the first three and then there’s Polin dribbling the ball down the left wing in transition and there was one defender back between her and Dayna,” Funsten said. “Nobody is better than Polin at drawing the defender and finding someone for the open shot. So, as Polin dribbled the ball over halfcourt, I just thought ‘there it is’ because we’ve seen it so many times, not just to Dayna but other players as well and she set it up perfectly.”

Eskew might not have a record to call her own, but it’s doubtful anyone has run more miles chasing defensive assignments than the guard has in 100-plus games with UD.

A bench player that first year, the Rider cross country and track recruit hasn’t left the starting lineup since the beginning of her sophomore year. Defense is the hallmark of the Cardinals’ program, and there haven’t been many assignments Funsten hasn’t trusted Eskew to take on.

“I always tell Sarah she has a book, and I tried to explain it to her and she looked at me like I had seven heads,” Funsten said. “I told her in baseball, when you hit a home run off a pitcher, you say they’re in your book. When you play a really good player on the other team and hold them to a career low, that should go in your book. I don’t know if she hates baseball or just didn’t get my reference but either way, she’s been priceless to us too.”

Funsten lauded Balasa’s ability to play to her strengths and not try to do too much. Even as her proficiency from outside gained traction among opponents and they began planning for her, the guard still continued to hit from beyond the arc.

“Day in and day out, she just has a quiet confidence about her and she knows her limitations,” Funsten said. “She has so few turnovers in her career because she plays so simple and if she doesn’t have what she’s looking for, she gives it up and works to get the next look.”

Balasa had her own on-the-spot moment to answer for when asked if she felt more proud of her 1,000 points or the 3-point record.

“That’s a hard one to pick, they’re both such big achievements that I’m equally proud of both,” Balasa said. “It’s a result of practice and being confident to keep shooting even if I’m missing.”

Polin and Balasa split up on the AAU circuit, with Polin for the Rebels then this past summer with the Mid-Atlantic Magic on a who’s who roster of local standout seniors. Balasa meanwhile plied her talents with the Comets where she too teamed up with some other top local talents.

The dynamic duo stayed pat at Upper Dublin however and teammates quickly learned they were pretty fun to play with between Balasa’s shooting spacing the floor and Polin able to find anyone with a perfect pass. Much like he doesn’t have to worry about Eskew sticking her mark defensively, Funsten knows the offense is in good hands with Polin pulling the strings.

“I would love to say the coaching staff taught Polin all of that but she came to us with an extremely high basketball IQ,” Funsten said. “The way she makes her teammates better is unmatched. I was kind of hoping she’d get her 500th assist on Dayna’s 1,000th point, that would have been the perfect combo but she was a little ahead of the game.”

Unlike normal years, the postseason is one-and-done this season so the Cardinals won’t get any do-overs once they start play in the district tournament next week. UD will ask a lot of its senior leaders but by now, they’re pretty much used to it.

“We just have confidence in each other,” Polin said. “I don’t know how to explain it, but I know where she’s going to be and what she wants to do and she knows the same for me.”

“We just have that connection,” Balasa chipped in.