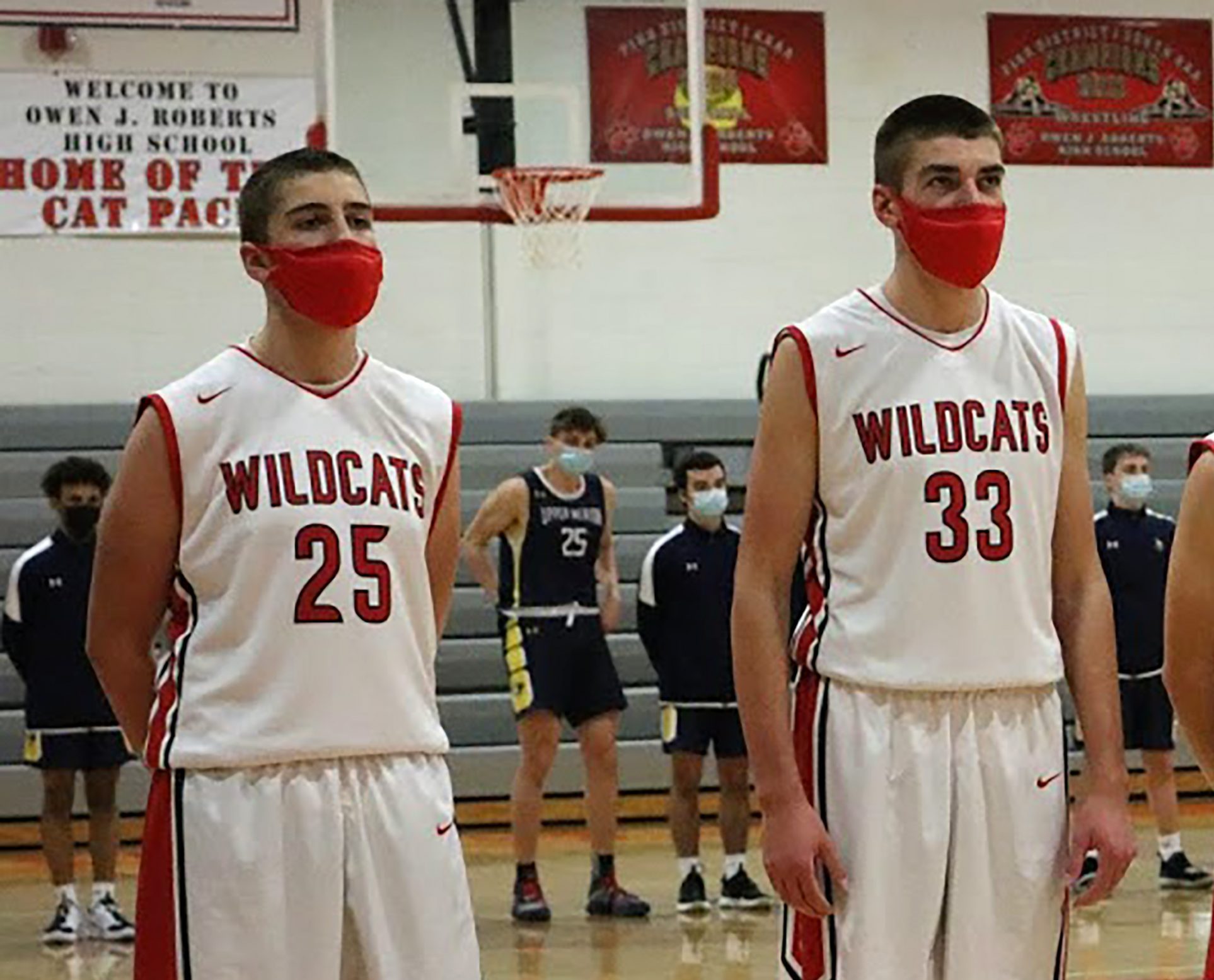 While Owen J. Roberts’ final play Tuesday night didn’t transpire exactly as planned, it was a dream finish for the Bolyn brothers and the Wildcats.

Driving toward the hoop in the waning seconds of a Pioneer Athletic Conference matchup with Spring-Ford, sophomore Jake Bolyn saw an extra defender come over to help. He knew where to go with the ball.

Like he’s done many times before throughout their lives, Jake looked to senior brother Brody Bolyn, who was open about 10 feet from the basket.

“I saw his guy come over, so I knew he’d be somewhere open,” Jake said. “I just spun around and saw him, so I had to pass it to him.”

Brody wasn’t sure whether the shot was good when it left his hands. Younger brother Jake planted himself in good position for an offensive rebound, but he had seen big bro make the shot enough times to know it was in right away.

The Bolyn-to-Bolyn connection and Brody’s game-winner with just 1.8 seconds on the clock gave the Wildcats a 56-55 win over Spring-Ford — their first win over the Rams since 2014-15. Their parents, both in attendance for the first time this year, were also able to witness the play in person.

It was a special way to end OJR’s season and the Wildcats’ career for Brody.

“It was the best way to end that. I’m so glad that we were able to get that, and I’m never going to forget that.”

Tonight’s game winner by Brody Bolyn with 1.8 seconds left in the game! pic.twitter.com/4tDOLDif21

Brody, a senior, and Jake, a sophomore, have played hoops together for most of their lives. Along with games in their driveway — a common occurrence during quarantine — Jake often played up an age group or two with Brody and his friends.

Plays like Tuesday night’s have been common for the Bolyn brothers this season. The chemistry between the two brothers was mutually beneficial. Sometimes it was Jake finding Brody. Other times it was Brody tossing back to his brother relocating behind the 3-point line.

“Every time I dished to him, he could always get up high and it never gets blocked, really it’s always a foul or a make,” Jake said. “The relocating is always cool because I know when he doesn’t have a shot he’s going to kick it back out to me.”

While the two had connected on similar plays before in their time together on the court, it had never happened at a more important time in the game.

“Never at the end of the game,” Brody said. “That was awesome that we were able to do that. The play was designed to run differently, but Jake saw the opportunity to drive so he drove. My guy stepped over, so he passed to me and that worked out awesome. I did not feel like it was going in, but I’m really glad it did.” Brody Bolyn (33) goes up for a shot against Phoenixville earlier this season. (Owen McCue – MediaNews Group)

Jake and Brody played a little bit together for OJR last year, but the 2021 season marked the first time the two consistently shared the court at the high school level.

Brody, a 6-foot-7 post player with a strong midrange game, returned to the Wildcats’ starting lineup for the second straight year. Jake, who played on the freshman team as an eighth grader, spent most of his time on JV last season, getting a few varsity appearances late in games.

Wildcats coach Bill Detweiler remembers consistently spending a half hour after practice to work with the Bolyn brothers throughout the past two seasons. He said the hard work showed on the floor this season as both were in the starting lineup.

Jake ranked fourth on the Wildcats in scoring this season at 9.6 points per game, establishing himself as one of the top 3-point shooting threats in the league with 29 on the season. Brody finished fifth in scoring at 8.1 points per game, while anchoring the paint for OJR’s defense.

“So much is attributed to their hard work and asking for help,” Detweiler said. “A lot of times high school guys come in the gym and they practice hard, but then they’re out the door in two seconds after practice. Those guys were always asking, ‘Can you stay around? Can you help me?’ Those two guys just work on their game outside of the gym too, which is so important.”

The Wildcats had an up-and-down season, finishing 5-9 but ultimately they were consistently competitive in Detweiler’s second season as head coach.

Three games into the season OJR picked up a 74-70 win over Boyertown. After a slow start, Jake scored 17 in the second half of the win against the Bears. Sparked by a hot shooting night from Jake, the Wildcats came back from nearly 20 points down to beat Upper Perk in a PAC Crossover win later on.

There were a few others that just slipped out of their grasp, including a 50-47 loss to Liberty Division champ Perkiomen Valley and a 51-49 loss to PAC champ Pope John Paul II.

Ending the 2021 campaign with a win over the Rams was a nice way to highlight the strides the Wildcats took this past season.

“That was definitely our best win this season,” Brody said. “I’m so glad that we could get that.” “We finished with two wins in a row, so hopefully we can keep that going into next year,” Jake said.

Brody is unsure where he’s headed next season though he’s been in contact with coaches and plans on playing somewhere at the next level.

Maybe in a few seasons he can reunite with Jake once again and team up for another game-winning play.

For now, the Bolyn household has a play to be talked about for years to come.

“It was a perfect ending,” Detweiler said. “I didn’t realize at first until I went back and watched the video that Jake had gotten the assist to his brother on the big shot. That made it even more special for sure.”