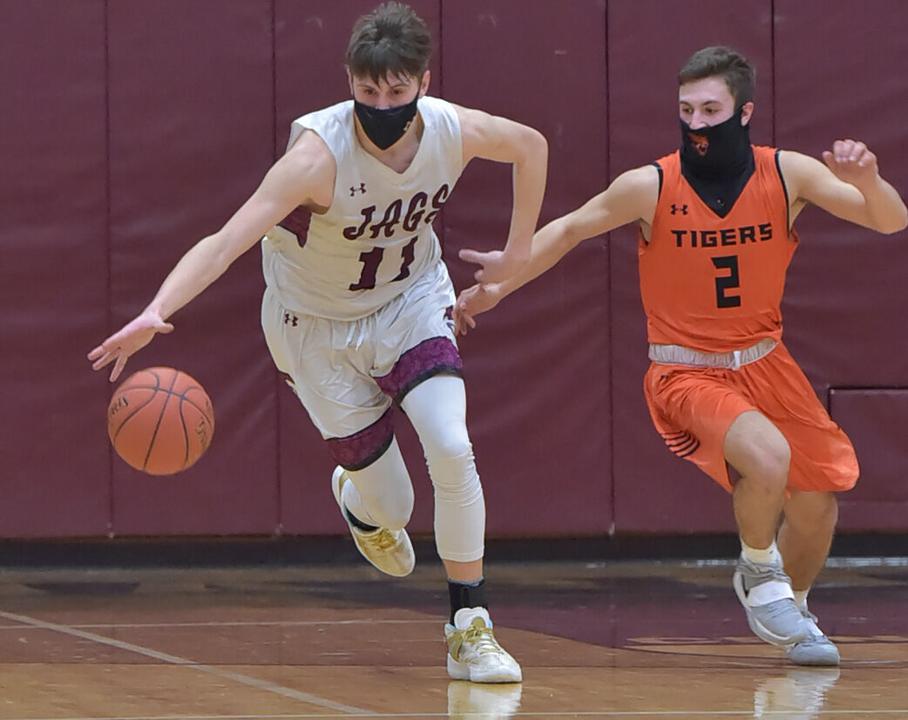 The teams played last week, a two-point Garnet win. They played earlier in the season, though the Tigers have made huge strides since. And they’re two teams that rely on crisp ball movement, veteran play at the point and wings and 3-point shooting to open space in the half-court.

So Tuesday’s meeting was as much about getting a familiar opponent out of its game plan as it was settling into its own. On that score, Garnet Valley did the better job, the No. 2 seed using 20 points from Carl Schaller to tally a 44-39 win and move on to Thursday’s championship game. The job was done primarily defensively, as Garnet Valley forced the sixth-seeded Tigers into a 12-for-43 shooting night that halted a run of six wins in seven games.

“We knew what they were about and we knew their players,” Schaller said. “I think as you play teams over and over again, it gets harder to score because they know you, too. There were adjustments on both sides, but we got it done.”

The emphasis was the high post, where Marple’s off-ball movement can stupefy defenses. Though one of Delaware County’s top 3-point shooting teams for a second straight year, this year’s hallmark for the Tigers is ball movement, assisting on around 60 percent of their field goals.

But by Garnet Valley (14-3) disrupting the off-ball action, hedging screens and pressuring the ball to deter skip passes or close off back-door lanes, they were able to frustrate the Tigers (10-7), who had just 12 points at halftime despite zero turnovers. They coughed the ball up just three times total.

But Garnet Valley’s focus was on getting Marple to take shots that the Jags were comfortable with, turning Mike Tansey’s 3-pointers, for instance, from 23-footers to 26-footers. Add in Garnet Valley’s length in congesting lanes and six shot blocks on strong help defense, and a Marple offense that has been humming along found points hard to come by.

“I think the defense on both sides was really good, especially on our side,” Schaller said. “We let up 12 points in the first half, so that really slowed them down. It was kind of a game of mini-runs: We would score six in a row; they would score four. But it was more a game of defense and getting each other out of flow.”

“Being able to pressure the ball hard enough, they’re not able to look in the post,” forward Gannon McKee said. “The look to turn their body and swing it back to the top of the key or to the wing. We’re also a very physical team and we try to be the most physical team on the court no matter the size. We’re not a very big team, so we know we need to be physical.”

Thats great help defense from Carl Schaller to reject Owen Mathes at the horn. Nothing easy this half on either end.
Garnet Valley 22, Marple Newtown 12 pic.twitter.com/3pEWoMeNuP

The Tigers didn’t go away. They had more points in the third quarter than the first half, thanks in part to Tansey hitting a pair of triples. A Mathes and-1 closed Marple within four at 33-29 early in the fourth.

Garnet Valley scored on each of its first three possessions of the third, but then just one of the next eight, settling for too many jumpers. So Schaller promptly changed the tone, bombing to the basket once, then again for and-1s to open the fourth. When Justin Langan hit his third 3-pointer of the game, the lead bounced back to 10 and the result was largely decided. That duo shouldered the offensive load. Langan had 15 points, 10 rebounds and three blocks, smartly avoiding trouble from two first-quarter fouls. He shot 3-for-5 from 3-point range; the rest of the Jaguars were 1-for-13. Schaller added nine rebounds and three assists.

Garnet Valley takes on top-seeded Conestoga, a 63-40 winner over No. 4 Strath Haven, Thursday with a league title on the line. For a program that has become a regular fixture in districts, the big-game experience trickles down the years. The comfort they’ve showed gritting out wins in the 40s and 30s this year, as opposed to a more high-octane style last year, is indicative of hard-won toughness.

“We’re a veteran team,” Schaller said. “… When you have more veterans on your team, they know what to do and they have experience and I think just having that experience allows us to make runs.”

Delco Christian 47, Dock Mennonite 44 >> Jace Kees made his only field goal count, burying a 3-pointer at the buzzer off a feed from Earle Greer to earn the Knights (10-4, 9-2) a second win over Dock in five days.