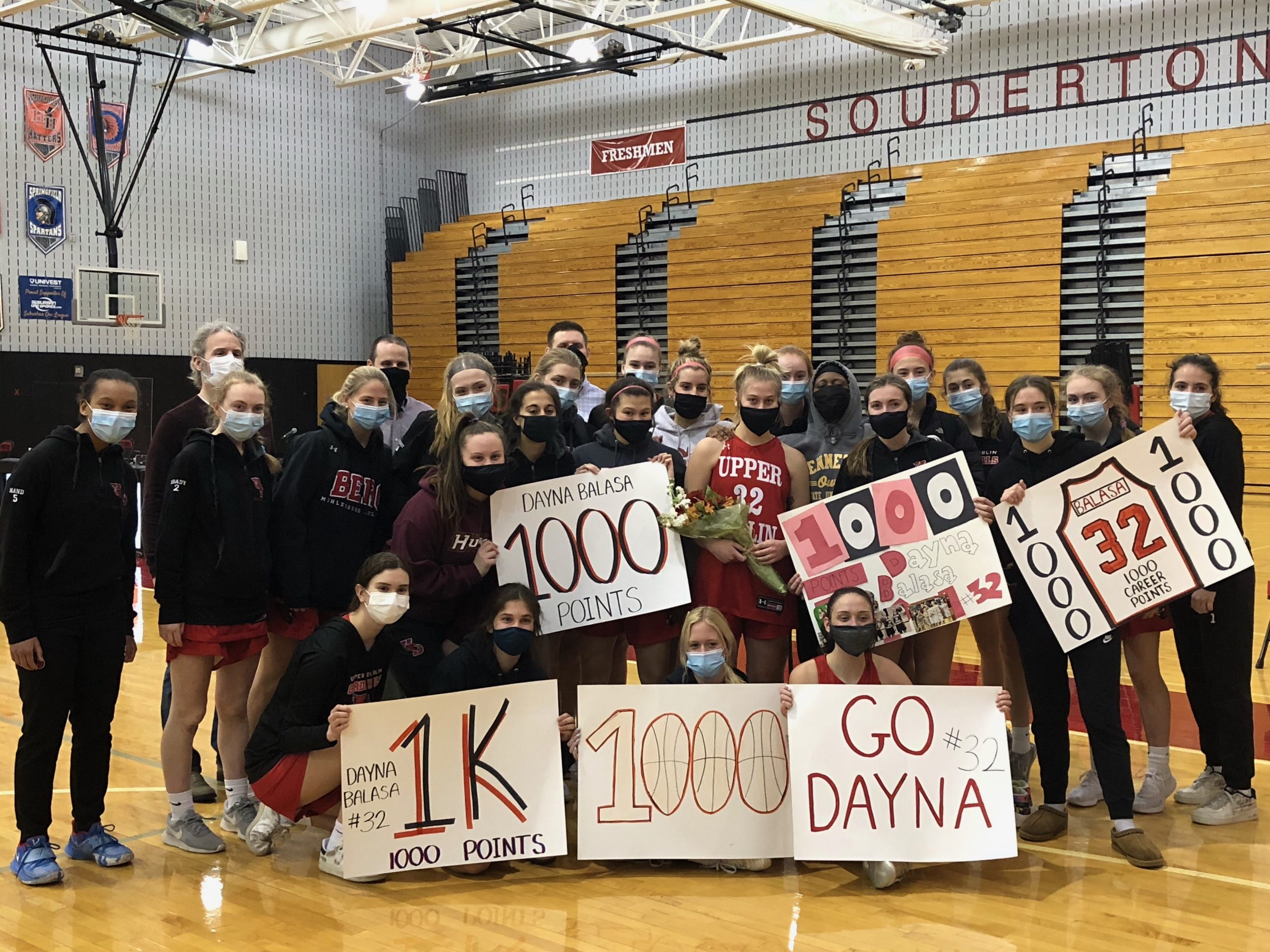 FRANCONIA >> The day started with a milestone and ended with another textbook Upper Dublin finish.

On the road against a Souderton team looking to pick up a big win to solidify its District 1-6A playoff spot, Cardinals senior Dayna Balasa chalked up her 1,000th point early. From there, it was defense and some clutch free throws that helped hold off Souderton’s late charge.

With her teammates’ help, Balasa celebrated a big number with a win as UD topped Souderton 43-36 Tuesday.

“It was so exciting, but also a relief,” Balasa said. “Huge thanks to my teammates.”

Balasa, the Cardinals’ career leader in 3-point makes, needed just six points entering the game to hit 1,000 and unsurprisingly, they went to her early. The deadeye senior clocked a three off a Jess Polin assist on UD’s first possession but would have to wait a few more minutes for next three points.

Finally, with 5:34 left in the game’s opening quarter the USciences recruit hit 1,000 fittingly on a 3-point jumper that was fittingly assisted by Polin, a fellow senior and the program’s career assist leader. Balasa, who notched her 250th trey last week hit all net then got swarmed by her teammates during the following timeout.

“I’ve always thought about it, it was something in the back of mind but I just wanted to win,” Balasa, a four-year starter, said. “However we win, that’s all I wanted.”

UD coach Morgan Funsten credited the sharpshooter’s consistency over her four years with the program.

“She’s extremely confident, she’s not cocky but she’s confident in her ability,” Funsten said. “You see so many examples of someone trying for their 1,000th and missing their first seven shots. She didn’t even touch the rim on her first two.” Upper Dublin’s Dayna Balasa watches the flight of the ball on the shot that netted her 1,000th point.

Upper Dublin (17-3), which held the No. 3 spot in the District 1-6A rankings coming in, started hot with a 4-of-7 showing behind the arc leading to a 14-4 lead after one. Souderton, which didn’t get its first field goal until a putback by senior Jordan Zimmerman with 1:48 left in the quarter, was down but not out.

The hosts, who sat No. 18 in the 6A rankings prior to tip, did get a boost with Central Bucks East’s win over Plymouth Whitemarsh earlier in the day but needed to get something going on the floor against Upper Dublin. Sophomore Erin Bohmueller did just that, hitting a 3-pointer off a Teya McConnaha assist followed by another jumper before Zimmerman scored for a quick 7-0 run.

UD’s only offense in the second came from a pair of hoops by freshman Amy Ngo, but they were enough to keep the Cardinals ahead 18-15 at the half.

“They made some really tough shots and we were happy with the shots we were getting but they weren’t falling,” UD coach Morgan Funsten said.

Polin and Balasa connected again, this time with the assists leader hitting the 3-point leader for a layup on a bounce pass as the Cardinals began the third quarter on a 9-0 run. Three of the four baskets by the Cardinals in the sprint were assisted by Polin, who took advantage of a couple opportunities to get scores in transition and bypass Souderton’s stout halfcourt defending.

A three by Polin stuck the visitors to a 30-19 lead but again, Souderton had an answer. Senior Olivia Schneider made a terrific play, grabbing an offensive rebound off a missed foul shot and finding Hayley Fenchel for a short jumper that capped a five-point burst to get within six of Upper Dublin.

“We knew they needed to win this game to maybe secure their spot so they were going to play us tough,” Polin said. “It was important that we matched their intensity and think we did.”

Geena Sarnoski, who was a huge presence off UD’s bench with nine points, ended the third and started the fourth with back-to-back baskets that put her team back in front by 10 points. The guard was part of the quick start, scoring five points in the first quarter and added a couple rebounds in a nice effort.

“We’ve seen her be capable of doing it whether it’s in practice or open gyms, but she hasn’t been able to showcase it in games,” Funsten said. “I’m so happy for her that she had her moment today.”

Souderton sophomore Casey Harter came on strong late, scoring six of her 10 points in the final quarter and a traditional three-point play by Schneider cut the Cardinals’ lead to 38-32 with 1:24 to play. The hosts wouldn’t get any closer than five points over the final 84 seconds however as Upper Dublin closed 5-of-6 at the foul line to close out the win.

Wednesday is the cutoff for District 1 results and both teams will get one last contest in. Upper Dublin will host Methacton in an afternoon tip while Souderton welcomes Council Rock North in a must-win contest.

“We know we just need to keep having good practices and finish strong (Wednesday),” Balasa said. “If we keep playing like we have, we’ll be able to go pretty far.”

“It’s a short season, but if we stick together as a team, we can match the way we’ve been playing,” Polin said.