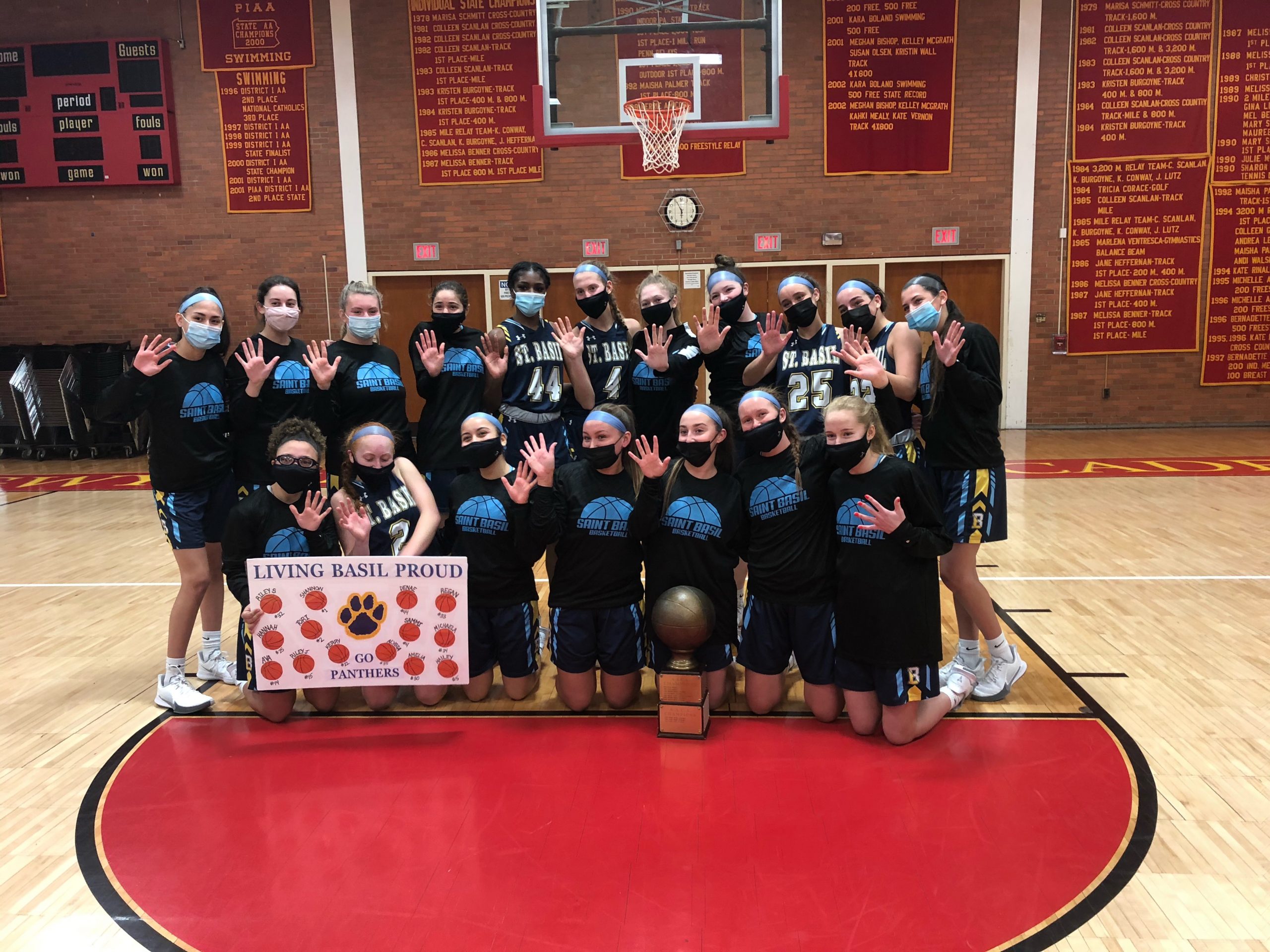 LOWER GWYNEDD >> It was only 9.7 seconds but it felt like hours.

Holding a one-point lead with its streak of AACA titles on the line, the St. Basil Academy girls basketball team only needed one stop against Gwynedd Mercy Academy. Knowing the slightest glimmer of space was all the Monarchs needed, the Panthers weren’t taking any chances even if it meant extending that 9.7 seconds into much longer.

The No. 2 seed Panthers’ long game paid off, they got that last stop and celebrated their fifth straight league title with a 44-43 overtime win over the top-seeded Monarchs on Monday.

“It felt so long,” St. Basil point guard Tori Nigro said. “I kept looking over at my coaches seeing what they wanted us to do. (Assistant coach John Gallagher) was telling me we had a few fouls to give but I just stayed in front, let it play out and it went well for us.”

Gwynedd Mercy, which had dropped St. Basil twice in the regular season to first snap a Panthers 46-game AACA game winning streak and second to finish with a regular season league title, took its first setback of the season. The Monarchs were denied their first title since 2016.

While the game wasn’t played at a breakneck pace, it stayed within a couple possessions the whole way and saw both sides trading clutch scores in regulation. St. Basil (12-2) got a major lift in the form of senior Denae Carter, with the Mississippi State bound senior returning from a two-game injury absence.

Carter netted 12 points, tying with Nigro and Sammie White for team high while adding 10 rebounds, two steals and a pair of blocks.

Nigro converted the free throw on an and-one with 2:27 left in overtime to put the Panthers ahead 44-41. The Monarchs got within one when Hannah Griffin hit a jumper with her toes just over the 3-point line that sliced the lead to one with 2:04 left.

After St. Basil missed on a reverse layup with about a minute to go, Gwynedd Mercy Academy (13-1) worked the clock until coach Tom Lonergan took a timeout with 9.7 to go. He knew the Panthers had fouls to give

“They knew they had four fouls to give and they did a great job of taking the time off the clock to force us to not have any time to get a good look,” Lonergan said. “We have so many quick-hitters, we don’t need a timeout to go through the stuff so my mistake was either deciding to leave them out there to go keep running through it, or call the timeout sooner.”

St. Basil used its fouls smartly, taking one in the backcourt that forced Gwynedd Mercy to inbound from a less advantageous position and chipped time off until it left just 2.6 for the Monarchs to work with.

“What hurt us was the start of the overtime, we had two defensive stops but two uncharacteristic looks compared to what we were doing the rest of the game,” Lonergan said. “Eventually, they scored but to our credit, they hung in there. They did what we asked defensively to get the ball back at the end, we couldn’t have asked them for anything more.”

Neither team substituted during the game, so there were no breaks defensively for St. Basil against GMA’s crisp offense. For Nigro, that meant weaving through a maze of screens trying to chase Monarchs senior Kaylie Griffin, who notched a game-high 17 points.

The Panthers didn’t take their first lead until a putback by Carter gave them a 19-17 edge and a driving score by the senior made it 21-21 at the half. Offense picked up a bit in the third quarter, with a difficult leaning three by Kaylie Griffin kicking off a 15-point quarter for Gywnedd while Sammie White’s six points paced the 15 points from St. Basil in the frame.

“It’s all in the resiliency of these girls, they’re champions,” St. Basil coach Terry Mancini said. “They played like it today. They have two losses in this league in their four years and they both came to Gwynedd this year. It’s a great way to go out.”

White, who scored nine of her 12 after halftime, gave the Panthers a 39-36 lead with 4:40 to play but Kaylie Griffin made a tough drive through contact and hit the ensuing free toss to knot the score. The GMA senior came through again for another tying score with 2:35 left after Carter made a terrific pass to senior Riley Scannell the previous possession.

Gwynedd Mercy Academy had a chance to win in regulation, but an initial look was off and a putback try agonizingly hit the back iron and rolled off at the horn.

Nigro, who had missed two free throws in the fourth quarter, stepped to the line in overtime looking to make up for it by converting the and-one for a three-point lead.

“I just had to be confident in myself,” Nigro said. “I know I can make free throws so I had to shoot that one confident and know it was going in.”

St. Basil Academy will close its doors at the end of the academic year, so this was the program’s final chance to win an AACA crown. The Panthers, who have nine seniors this year, made it imperative not only to get back to the final, but wrap their five-peat.

“It’s something we talked about all year,” Mancini said. “It’s unfortunate for our juniors like Tori and Sammie who have played really well all year. They’re my players and they’re all going off to different schools next year which is hard for me. We still have some season left, but today was awesome.”

The only thing missing Monday was a full gym of people to enjoy a game worthy of a trophy presentation afterward. Unfortunately, that’s the reality of this season and while the game was streamed live, Lonergan noted it wasn’t quite the same.

“This game would have been awesome at La Salle with a packed gym and people having to stand in the hallway, no matter who won,” Lonergan said. “It also would have been a great way for St. Basil to go out.”

The Monarchs, who are the No. 1 team in the District 1-4A power rankings, added a game with 6A No. 5 Downingtown East for Friday night as playoff prep. Lonergan knows his team is resilient as well and the seniors want to go 4-for-4 in district championship games.

St. Basil is also looking to continue its string of District 1 titles in Class 3A although the Panthers will have to wait until March 16 for their next game.

“Tom is a Hall of Fame coach and they run such great stuff, but I thought our toughness showed today,” Mancini said. “It was a big part of it for us.”

“We knew this was going to be a tough game, but we wanted it and in the end, we worked really hard for it,” Carter said. “From here on, it starts in practice. We’ll just get back to working hard there.”

A FAMILY AFFAIR >> St. Basil senior Shannon Remolde hasn’t played this season due to an injury, but she made sure her family record wasn’t scuffed on the way out.

She’s been part of four AACA titles while her two older sisters Cheryl and Casey helped start the five-year streak. Cheryl Remolde was member of the 2016-17 and 2017-18 teams while Casey, currently a sophomore on Kutztown’s women’s team was on first two championship squads and was the AACA MVP with the 2018-19 team.

“It’s a big accomplishment for us and it’s awesome we were able to do it,” Shannon Remolde said of her family’s sterling 5-0 record in AACA title games.

Shannon, who will also be joining Kutztown’s program next year, tried to be a supportive presence as she watched the season in a heavy leg brace.

“I’ve been able to get a new perspective,” Remolde said. “They’ve all stepped up. I think, with me being out, they weren’t quite ready for it the first game but throughout they’ve all come to play every game.”

Remolde, who took hold of the AACA trophy after the game, said the fifth title was good closure for the Panthers although she’s not ready to say goodbye to the program yet and hopes for a state playoff run.

Unable to do anything but watch the final defensive stand, Remolde said she had faith in her teammates to see it through.

“I just felt excitement,” Remolde said. “I love watching them do well and it’s the best feeling when they can do something like that and I love watching it happen.”