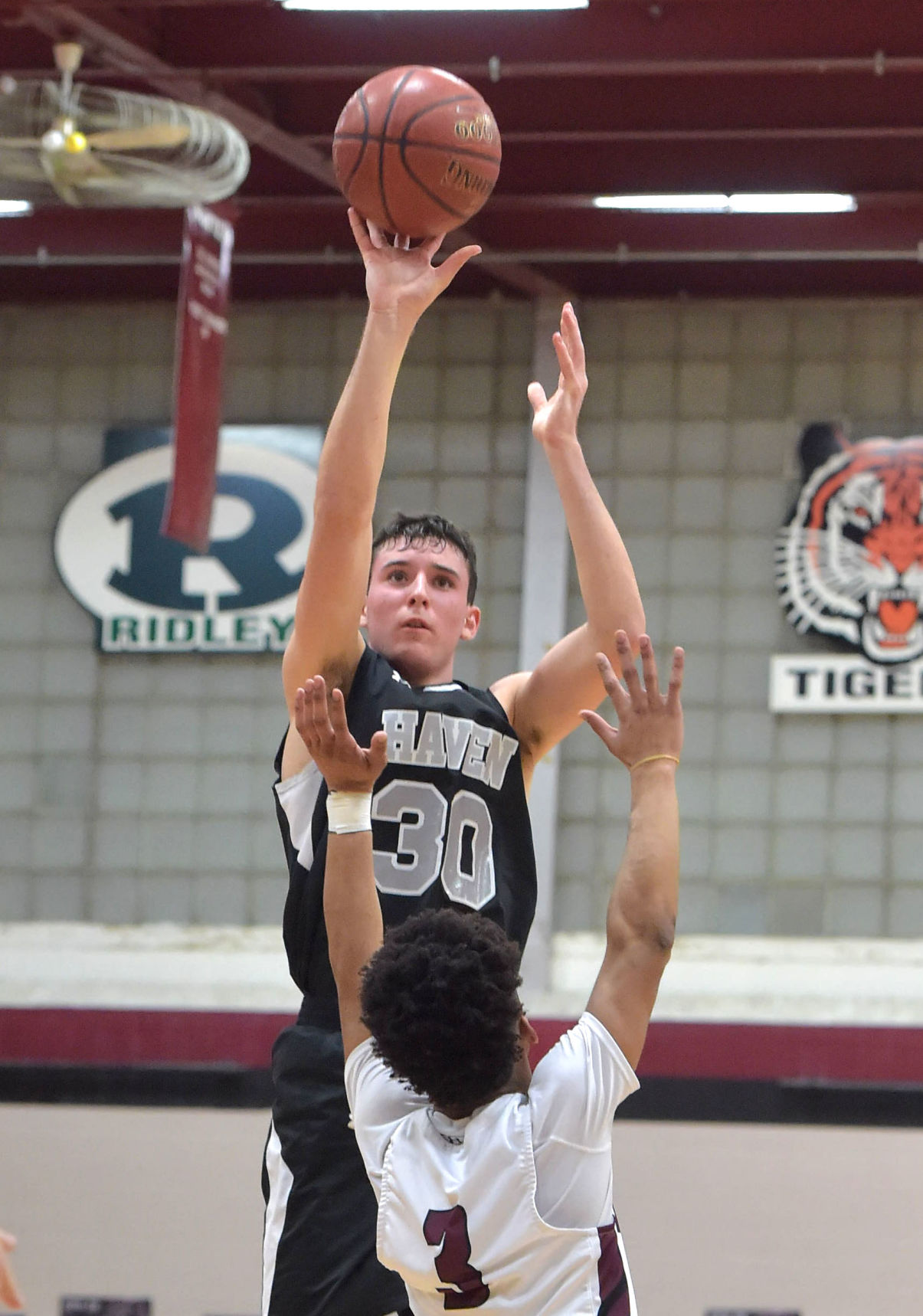 Strath Haven's Luke Edwards, seen shooting over a Radnor defender in a game last February, hit the game-winner in the final second of a 41-39 win over Haverford in the Central League quarterfinals Sunday. (Pete Bannan/MediaNews Group)

NETHER PROVIDENCE — Everyone in the gym at Strath Haven knew what was going to happen in the final 22 seconds of a tie game Sunday afternoon.

The fourth-seeded Panthers would hand the ball to Luke Edwards – with his 4-for-13 shooting day, and with Haverford’s best defender, John Seidman, shadowing him – and ask Edwards to take them to the Central League tournament semifinals.

As he has so many times in his career, Edwards delivered.

The senior canned a pull-up jumper at the free throw line with six-tenths of a second left, sending Strath Haven past Haverford, 41-39, in a Central League quarterfinal.

“Coach told me to shoot the ball with around five seconds, and I saw the clock at four,” Edwards said. “So I made my move and I saw he (Seidman) was low on me so I rose up for the mid-range. I know I was missing some shots in the beginning. But I have that mentality that shooters keep shooting, and I took that last shot with confidence, and I made it.”

The shot helped banished a frustrating shooting day for Haven (8-3), which advances to visit top-seeded Conestoga Tuesday night. The Panthers shot 16-for-40 (40 percent) from the field on a day where the teams combined to go 6-for-35 from 3-point range.

Edwards missed his first four shots. Strath Haven’s second-leading scorer Matt Shuler was empty on his first five. But they got going in time in their first game back from a two-week stoppage due to COVID-19 safety protocols that cost them the final three games of the regular season.

Edwards didn’t point to that as an excuse, and the inability to sink jump shots despite getting open looks and running clean offense (single-digits turnovers for each team) afflicted both teams.

On paper, it shaped up as a battle of star players, who happened to spend much of the day guarding each other. But that didn’t materialize on the offensive end.

Edwards had a game-high 13 points, including six in the fourth quarter. Seidman endured a 1-for-13 day from the field, despite not settling for jumpers and being aggressive off the dribble. He finished with seven points, 11 rebounds, two assists and a lot of energy spent keeping Edwards mostly quiet.

Instead, the supporting casts stepped up for two teams that prize scoring balance.

Haven went six minutes without scoring to open the game but led 16-15 at the half thanks to a Shuler 3-pointer. When they dashed off a 14-2 run in the third, Carl Borgstrom was at the center with five points, running the floor assertively to get to the rim.

“That was a great boost,” Edwards said. “I have all the confidence in them and I know they can hit those shots. We all were really happy with them being aggressive. We tell them, when we drive and we kick to them, we want them to shoot those shots. So we’re happy that they took those shots and made them.”

Haverford’s 8-0 run to cap the third and close the margin to two was inspired by a pair of jumpers nailed by Googie Seidman off the bench. With jump shots not falling, Nick Colucci took the initiative off the bounce, getting into the lane for a team-high 11 points before fouling out, adding seven rebounds and three assists for the Fords (8-5).

“Coming into the game, we knew that we had a mismatch,” Colucci said. “When coach called my name, I knew I had to attack and help our team out. … We definitely had a tough day shooting and we tried to attack the basket.”

A 3-pointer by sophomore Jaden Jauregi staked Strath Haven to a 36-30 lead with five minutes to play. But the Panthers missed three free throws, including two front-ends, as John Seidman clawed the Fords to within one at the line. Edwards opened the margin to three with a backdoor layup off a feed by Robbie Guilday (seven rebounds, three assists).

When Will George hit one free throw and the teams traded two empty possessions each, Hunter Kraiza tied the game with 22 seconds left, calmly sinking a one-and-one despite spending most of the fourth quarter on the bench.

That left Edwards to do his thing, one of several game-winners in his career. The drive to the soft elbow is one of his favorite shots, and he went to it twice successfully in the second quarter to get off the schneid. So when he got isolated on a defender up top, there was no doubt where he was going.

For his teammates, there was no doubt what would happen.

“It’s beautiful. It’s an art form,” Borgstrom said. “He’s been doing it since fourth grade. He’s always been that guy, so it’s always fun to see.”

In other Central League quarterfinal games:

Demetrius Lilley, the only remaining starter suiting up for the third-seeded Aces, scored 23 points.

Garnet will host Marple Tuesday in the other semifinal. The teams played a one-score game last Thursday.

Conestoga 41, Upper Darby 22 >> CJ Dabbs led the No. 9 Royals with seven points and AJ Tucker scored six, but the Royals had just nine points in the first half and never recovered. Michael Walz led No. 1 Conestoga with 15 points.