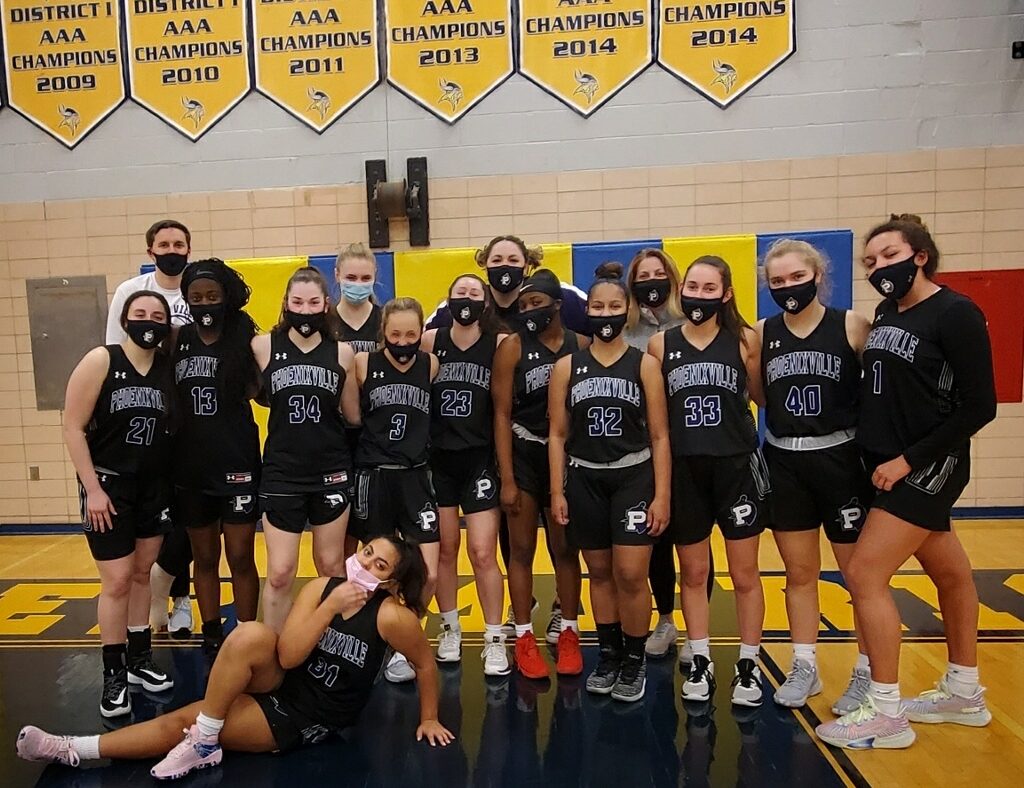 The Phoenixville girls basketball team poses for a picture after clinching a Frontier Division championship with a win Saturday at Upper Merion High School.

On Saturday, the Phantoms made sure that was the case no more.

Led by 22 points from senior Nailah Green and 14 from senior Aubrie Breisblatt, Phoenixville defeated Upper Merion to finish off a 9-1 showing in the Frontier and clinch its first division title in at least a decade.

Boyertown 33, Pope John Paul II 31 >> A pair of threes down the stretch by Madison Konnick helped the Bears pull out a PAC crossover win Saturday over the Golden Panthers.

Ashley Kapp led Boyertown with 14 points, knocking down four threes. She was followed by Mikayla Moyer with eight and Konnick with six. PJP’s Kallan Bustynowicz led all scorers with 17 points.

Spring-Ford 49, Upper Dublin 46 >> Though they received their closest test to date, the Rams (17-0) stayed unbeaten with a 49-46 overtime win over UD in non-league action Saturday.

Spring-Ford’s Lucy Olsen poured in 22 points and Abbey Boyer and Anna Azzara both had eight. Jess Polin had a game-high 23 points for UD (16-3), including five 3-point shots.

Emily Chmiel scored 22 points For CB East, which outscored Methacton 21-14 in the second half. Nicole Timko had 13, Cassidy Kropp had 12 and Mairi Smith finished with 10 to lead the Warriors.

Pottstown 52, Upper Merion 49 >> Riley Anderson’s 26-point outing couldn’t quite power the Vikings to their first win of the season in a PAC Frontier loss to the Trojans on Saturday.