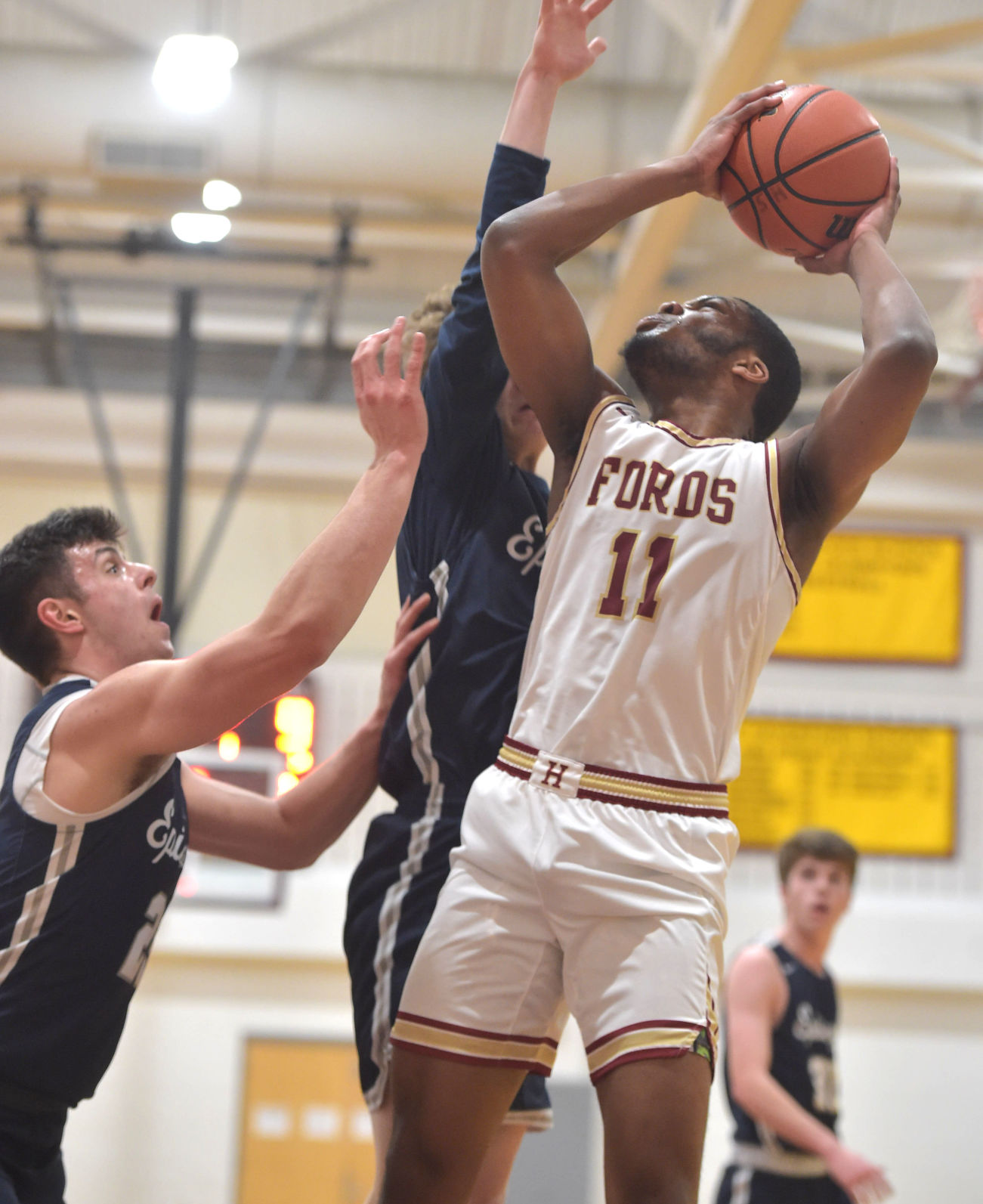 Haverford School's Christian Clover, seen in pre-pandemic action last year against Episcopal, scored 19 points against the Churchmen Saturday, with 10 of them coming in the fourth quarter. (Pete Bannan/MediaNews Group)

NEWTOWN SQUARE — The attention on the court gravitates toward Jameel Brown. How could it not, given all that the Haverford School junior can do?

Surprisingly, in the Fords’ season finale Saturday against arch-rival Episcopal Academy, Brown was a point-scoring bystander when his team went on a decisive run. He did just about everything else, though.

Brown ended up with 10 points in a 57-49 victory. But he didn’t attempt a field goal in the third, as the Fords accumulated a 21-0 edge in the frame to overturn an early deficit.

“We have a well-balanced team,” Brown said. “Coach has us focus on that in practice, sharing the ball. And trusting my teammates. I’ve been with these guys since I was a freshman and they were sophomores, so I definitely trust these guys.”

The Purdue commit had eight rebounds, five assists and four steals. The mere threat of him, particularly against EA’s swarming half-court defense, opens space for others.

Christian Clover was the main beneficiary, with 10 of his 19 points in the fourth. Zach Genther added 12 points and six assists, the Fords (7-2) moving the ball superbly … when they weren’t committing 18 turnovers. A dozen came in the first half. There was only one in the third quarter and voila, presenting a 24-0 run.

It was a very 2020-type game for Episcopal Academy. The Churchmen scored 16 points in the first six minutes, thanks to three 3-pointers from Will Delaney. They then scored eight points in the next 18 minutes, including the third-quarter goose egg.

Then, Delaney channeled Reggie Miller with eight points in 31 seconds to start the fourth and get the spread back to single digits.

“I just thought to myself, if this is the way I’m going to go out, it’s got to be with a spark,” Delaney said. “I just said, hey, we’ve got to hit shots. We didn’t score in the third quarter; it’s on me. I’m a senior leader, I’ve got to knock down shots.”

Episcopal (1-8) led 16-5, but the Fords steadily reeled them in. A Genther drive and dish to Ethan Pollack early in the third put them up for good. It’s Haverford’s fourth win this week to cap the season.

Delaney led all scorers with 23 points, including a 6-for-8 outing from 3-point range. Kevin McCarthy added 15 points.

In the Central League playoffs:

Marple Newtown 53, Springfield 39 >> Ryan Straub scored 16 points, Owen Mathes added 10 and the No. 6 Tigers were 10-for-12 at the line in the fourth to close out the game. Mike Tansey (10 points, five rebounds, five assists) contributed a 7-for-8 day at the stripe.

The Tigers will visit No. 3 Lower Merion Sunday.

Penncrest 48, Ridley 41 >> Saahir Lee went off for 20 points as the seventh-seeded Lions prevailed. Denzel Atkinson-Boyer added nine points for Penncrest, which will travel to No. 2 Garnet Valley Sunday for the quarterfinals.

Chichester 66, Constitution 60 >> Josh Hankins scored 21 points, including 11 in the fourth quarter, to cross the 1,000-point threshold for his career. Hankins was 15-for-16 from the line as the Eagles followed up a rough showing at the line Thursday against Penn Wood with a 29-for-35 day at the stripe.