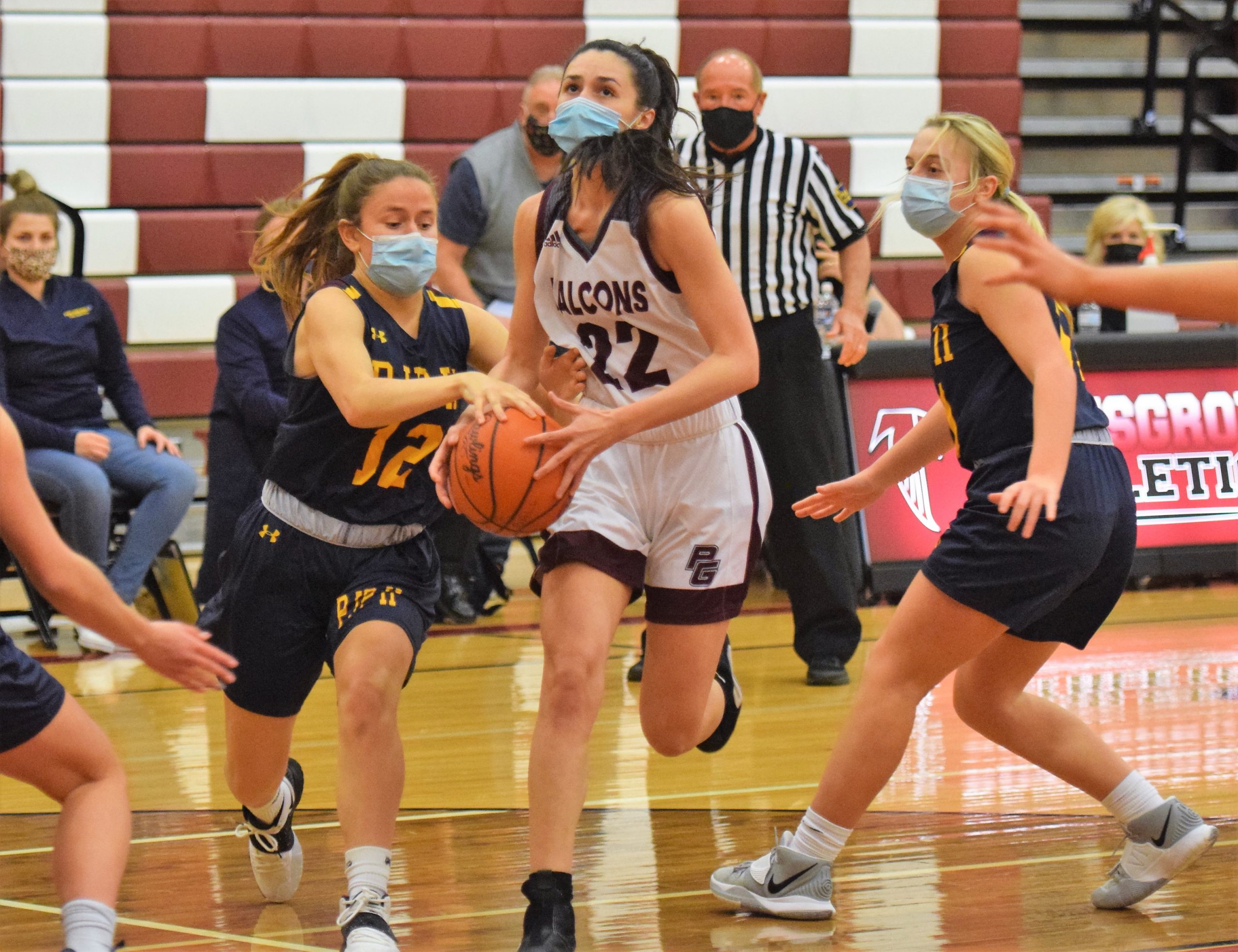 LOWER POTTSGROVE >> No one was more stunned by the Pottsgrove girls’ basketball team’s first seven games than the Falcons themselves.

As for the last seven games?

Much more like what the Falcons have grown accustomed to.

After a shocking 1-6 start to the season, Pottsgrove suddenly has a seven-game winning streak following Friday night’s best win of the season, a 31-19 shutdown of Pope John Paul II.

The Falcons (7-3 PAC Frontier, 8-6 overall) were stifling defensively while holding PJP to only five first-half points and they shared the load on offense with seniors Rachel Ludwig (10 points) and Sierra Potts (9 points) leading the way.

“We started giving each other pep talks in timeouts, trying to get that oomph in us to get back,” said Ludwig. “We don’t want to sulk on the court. We wanted to bring each other up more.” Junior Amelia Kennedy was the lone Golden Panthers’ player to gain any offensive traction in an 11-point game. Only two other PJP players scored, Kallan Bustynowicz (5) and Tess Crossan (3).

It was a full circle game of sorts for Pottsgrove: it’s season-opening 33-26 defeat to Pope John Paul II triggered the poor start that was not expected from a team that returned its entire rotation and was a win from reaching the PIAA Class 5A tournament in 2019-20.

“That is not what we expected either,” Simon said. “The very first game against them, after that we were all in shock. ‘What just happened? What went wrong?’

The lack of offseason play and team conditioning work hindered the start, according to Simon and Ludwig.

“Not having that the entire spring season and not being with each other and not playing together, it wasn’t what we expected,” Simon said. Then the Falcons had a COVID-related shutdown between Jan. 23 and Feb. 5. They came back to a stretch of three games in four days – losses to Phoenixville, Methacton and Perkiomen Valley.

Since then Pottsgrove has gotten right against teams in the bottom half of the PAC, until Friday’s visit a PJP team that had the best PAC record of any Frontier division team (9-3 entering Friday).

“It’s really nice to come back after losing to them the very first game of the season and beat them the way that we did,” Simon said.

“That was a perfect example of what the COVID season is like,” said PJP coach TJ Lonergan. “We haven’t had a (COVID-related) pause, but it felt like we just had a pause. It’s hard to keep them sharp, especially after the run we were having. We were playing well.”

“I understand now where some of these teams (who experienced season stoppages) are coming from.”

Pope John Paul II, which is secured in the District 1 Class 4A playoff picture at No. 3, has enjoyed a strong start that’s included wins over Phoenixville, Perkiomen Valley and narrow losses to Spring-Ford and Methacton. “They were playing very, very good team defense. We were doing a better job of taking the physicality and not turning the ball over,” Lonergan said. “We were getting solid looks every time down which put pressure on the other team.”

The defense was there for PJP Friday night, but the intensity and offensive sharpness was not present.

A dribble handoff from Justine Fretz to Potts for a 3-pointer late in the first quarter gave Pottsgrove an 8-2 lead that grew to 13-2 at the 6:35 mark of the second quarter on a Ludwig 3.

The game went silent until half with only one basket the rest of the quarter – a Bustynowicz and-one with 41.4 seconds left that was PJP’s second score of the game.

Pottsgrove opened the second half on a 10-1 run to go up 23-8 after a pair of Jaimi Makins free throws.

“We basically played the game they wanted to play against us,” Ludwig said. “We passed low, made them rush because they’re normally a slow-paced team.” Pottsgrove rose to No. 9 in the District 1 Class 5A power rankings with the win and are poised to make the 10-team field. Its season concludes with non-league games against Conrad Weiser and Oley Valley before capping its PAC slate at Owen J. Roberts on Tuesday.

Now that they’re feeling back to normal, the Falcons want to make some noise – literally and figuratively.