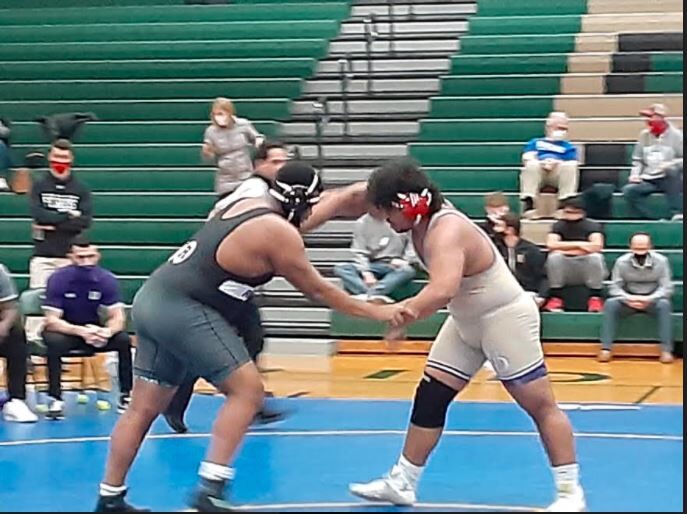 Radnor's Daetrel Jerome, left, locking up with Upper Darby's Julien Laventure at the Central League championships, earned a late entry to the Southeast Regionals this week after an injury withdrawal.

And we mean late.

Jerome was penciled into the bracket Friday afternoon to replace 285-pound qualifier Ben Farabaugh of Strath Haven, who finished fourth in the District 1 tournament but didn’t receive medical clearance to continue in the postseason.

Radnor coach Justin Schellenger said he and Jerome got the news right around lunchtime. Figures.

“Kind of a whirlwind afternoon especially when you’re dealing with a heavyweight who needs to cut weight to make 287,” Schellenger said proudly. “He’s going to make it. Daetrel has been wrestling since November of 2019. He’s a big kid who was a (football) lineman and I didn’t expect a ton. But I’ve had probably half a dozen coaches in the last year tell me he doesn’t always know what he’s doing at all times but he’s the most exciting guy in the gym. He’s explosive, he’s big, he hits big moves, wins and loses wild matches. It’s been a blast and I’m glad we get to do it another week.”

Jerome figured his season was over when he was beaten 3-0 by Nicholas Mahoney of Garnet Valley in the district consolation round last weekend at Sun Valley. He’d also lost to Upper Darby’s Julien Laventure, 7-1, and Farabaugh, 2-1. Laventure qualified for states last year and joins Mahoney in the regions.

Jerome (9-5) is the de facto fourth seed and opposes North top seed Max Harar (16-0) of Council Rock North in the opening round at C.R. South. Stepping in at the last minute tells you how much Jerome, a leader by example, enjoys competition.

Last-minute substitutions notwithstanding, the coronavirus protocols are going to make this a Southeast Regional like no other. The 145- to 285-pound weight classes wrestle at C.R. South. The 106- to 138-pound classes compete at C.R. North.

That format is challenging for the Delco schools, including Interboro coach Dan Tobin and his staff. Tobin will be in the corner of 126-pounder Nate Shippey at C.R. North, while assistants Eddie Hall and Anthony Petril will guide Dom D’Agostino (152) and Shalom Thomas (215) at CR South.

“It’s the times we’re in, the situation we’re in and we really can’t change it so we deal with it,” Tobin said. “But it’s still coaching and it’s still wrestling at its highest level right now. The kids’ ultimate goal still is to get to Hershey. Once you’re on that mat it’s business as usual.”

Garnet Valley has six wrestlers split almost evenly between the venues. Coach Rocco Fantazzi has tried to match wrestlers to the assistants they feel most comfortable with.

“I’m going to send two of them to one site, two to the other site,” Fantazzi said of his staff. “I’m going to start at one location and bounce back and forth. My assistants have invested a lot of time in the kids. We have great communication. I trust them and we’re on the same page.”

Wrestling begins at 10 a.m. With three mats going, the finals likely will start at 1:30 p.m. Fans aren’t allowed to attend but can keep up with the action via a livestream on PA-wrestling.com.

There are no returning state champs in the SE Region. No wrestler in the brackets finished higher last year than Sun Valley’s Ryan Catka, the 215-pounder who earned bronze at 195 pounds in Hershey.

At 132 pounds, Garnet Valley’s Griffin Hollingsworth and his 103 victories open against Central Bucks West’s Chris Cleland, who has 107. Nobody at 132 is going to be favored against Nate Lucier of Coatesville, who has 107 wins and is on a collision course with Hershey.

At 152 pounds, Chase Barlow of Strath Haven, coming off his third straight district championship, and Dom D’Agostino of Interboro compose half of the foursome that made the states in that weigh class last year. Zac Martin (Neshaminy) finished sixth at states, and Shane Kibler (Abington) was the other Hershey qualifier at 152.

Laventure (8-0), the top seed of the South, opposes Frederick Retter (19-3) of Quakertown in the opening round while Mahoney (15-4), seeded third in the South takes on second seed Miller (11-2).

The top four finishers in each weight class go to the Super Regional next weekend at Quakertown. In the revised playoff system, two wins at the Super Regional guarantee a medal at states, which will be a one-day event in Hershey.

The magic number for wrestlers is four. Two wins in the regional and two in the super regional make it a season to remember.

“We go week by week but all you need is four wins and you’re going to Hershey to pick up your medal,” Fantazzi said. “If there’s any year to go to states and get a medal, this is the year.”

Jerome obviously is a longshot. But it’s the heavyweight class. And Jerome is a last-minute kind of guy.

“Often times with heavyweights it’s pin or be pinned,” Schellenger said. “It’s kind of a crap shoot, really. I’ve always said heavyweight is so much a different sport compared to the rest of the classes.”