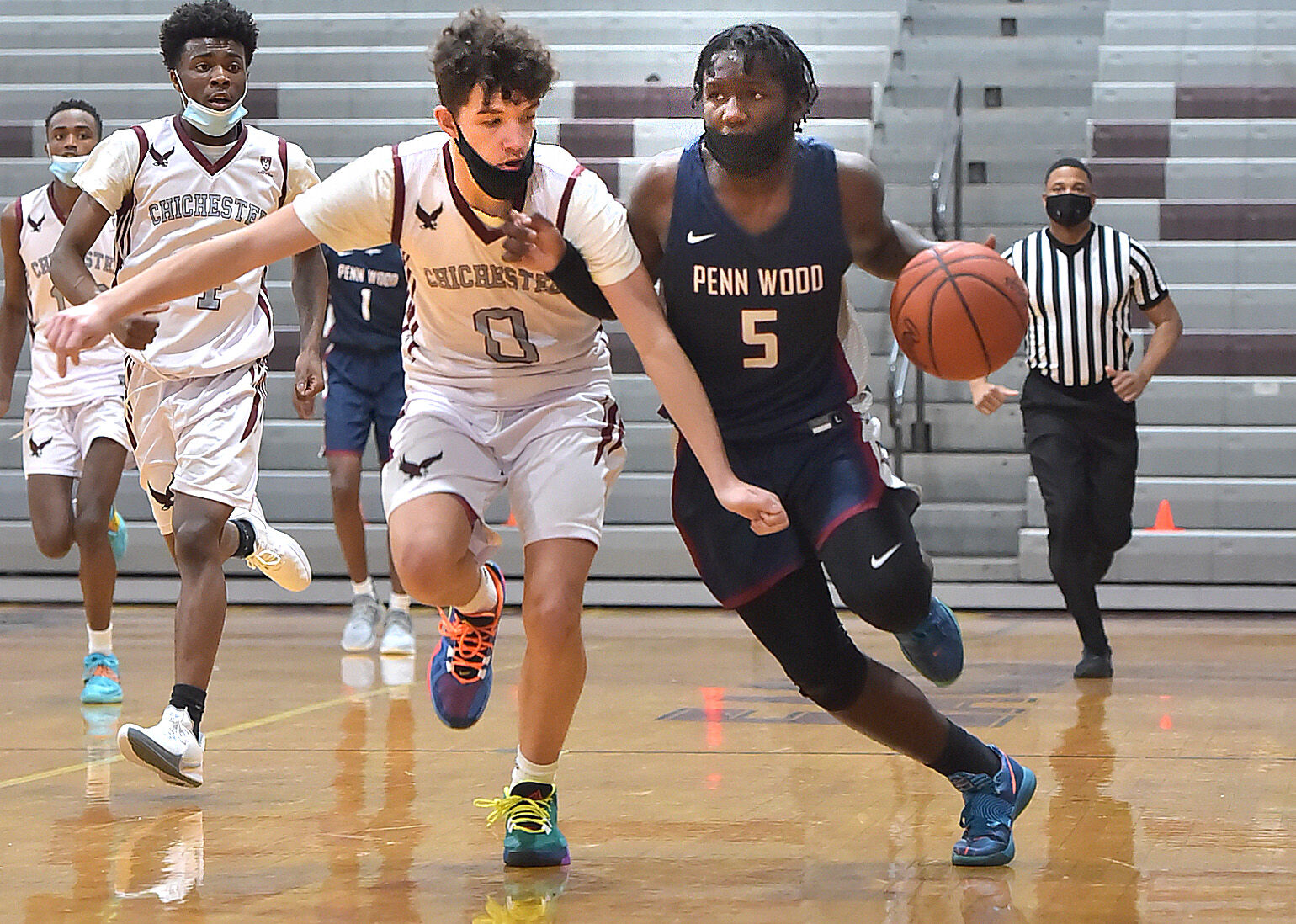 With two wins on their record and one week left in the season, a return to states is out of the picture. One big reason is that a few people Purnell assumed would be important this season were, likewise, long out of the Patriots’ picture, due to a combination of virtual schooling and the current pandemic predicament. Penn Wood’s Naeem Purnell puts a shot up in the first quarter Thursday night, as the Patriots were on their way to an upset of Chichester. (Pete Bannan/MediaNews Group)

Thursday didn’t roll back the years to the crisp, resilient Penn Wood of old. But in surviving a 46-41 slog against Chichester to avenge two losses to their Del Val rival, the Patriots salvaged something of the season.

“We just tried to play with what we’ve got,” Purnell said. “Most of the year, it didn’t work out. But they came back and helped us a lot.”

If you were up for some old-fashioned, down-and-dirty Del Val basketball, then a replay of this will cure that. Maybe forever.

How rough was it? The team that committed 25 turnovers, that shot 41.9 percent from the free throw line, that almost shot worse from the line than from the field, that missed 10 fourth-quarter free throws … that team won. It’s never a good sign when the combined turnovers (39) and the combined free-throw percentage (39.3%; 22 for 56) are in the same numerical neighborhood.

Chichester (8-5, 5-2) got 20 points from Josh Hankins. But he contributed a 7-for-12 day at the line to an overall putrid 9-for-25 performance at the charity stripe, despite the Eagles being in the bonus for most of the second half. Hankins entered the game 23 points shy of 1,000 for his career, something that he said, “wasn’t on my mind for a second.” He shot 6-for-18 from the field.

But for a team that has shown exemplary balance all season, only three players scored through three quarters. When Maz Sayed, who scored 12 points, fouled out with three minutes to play, the Eagles were in deep trouble, that pair accounting for 32 of 41 points.

Add in a 37-26 disadvantage on the boards, and even all those turnovers forced didn’t make a difference.

“We just didn’t run clean offense all game,” Hankins said. “Our teammates, they get us involved. We play defense and rebound. But we didn’t play smart and we didn’t rebound today at all. … It was just rough and was frustrating.”

Penn Wood (3-9, 3-4) entered looking for its first win against anyone other than Interboro. It found a 13-for-31 performance at the line and 13-for-32 from the field, including 7-for-16 from 3-point range. That included Purnell draining a dagger of a 3-pointer from the right corner with under a minute to play that made the lead five, all but insurmountable in such a game.

About those absences: Thursday was the just the fifth game of the season for Jerry Flynn, who had a breakout junior season. It was game No. 2 for Saalih Moore, who coach Matt Lindeman anticipated would be a leader this season. But the irregularities in schooling and life have kept them away from the court and well behind their teammates in terms of sharpness and form, a reminder of where basketball falls on the priority list in times like these.

Back to back drives by Ramir McDowell. Chi within 4 with 16.5 left. Bonus basketball of this PLEASE*

Moore led the way with 10 points, including a pair of second-quarter 3-pointers to put Penn Wood up for good. Purnell and Shamir Massenburg added nine each. Massenburg was the safest pair of hands with five assists and two steals, though a 5-for-13 outing at the line didn’t flatter. Flynn supplied six points and eight boards.

It’s not what the Patriots got last year on the way to the District 1 Class 5A final. But for Purnell, it’s something to build on, hopefully in the exact manner that the pandemic prevented them from building this year.

“It puts us in a position for next year,” Purnell said. “We’re going to come back next year harder.”

Chester 81, Interboro 43 >> Karell Watkins, the 2020 Daily Times Player of the Year, poured in a career-high 43 points to keep the Clippers undefeated in league play.

Fareed Burton Jr. also had a career game for Chester. He recorded a triple double with 17 points, 12 assists and 11 rebounds. He also made five steals.

Episcopal Academy 68, Springside Chestnut Hill 45 >> Kevin McCarthy tallied 18 points and Will Delaney added 15 to pace the Churchmen to the first win of the season.