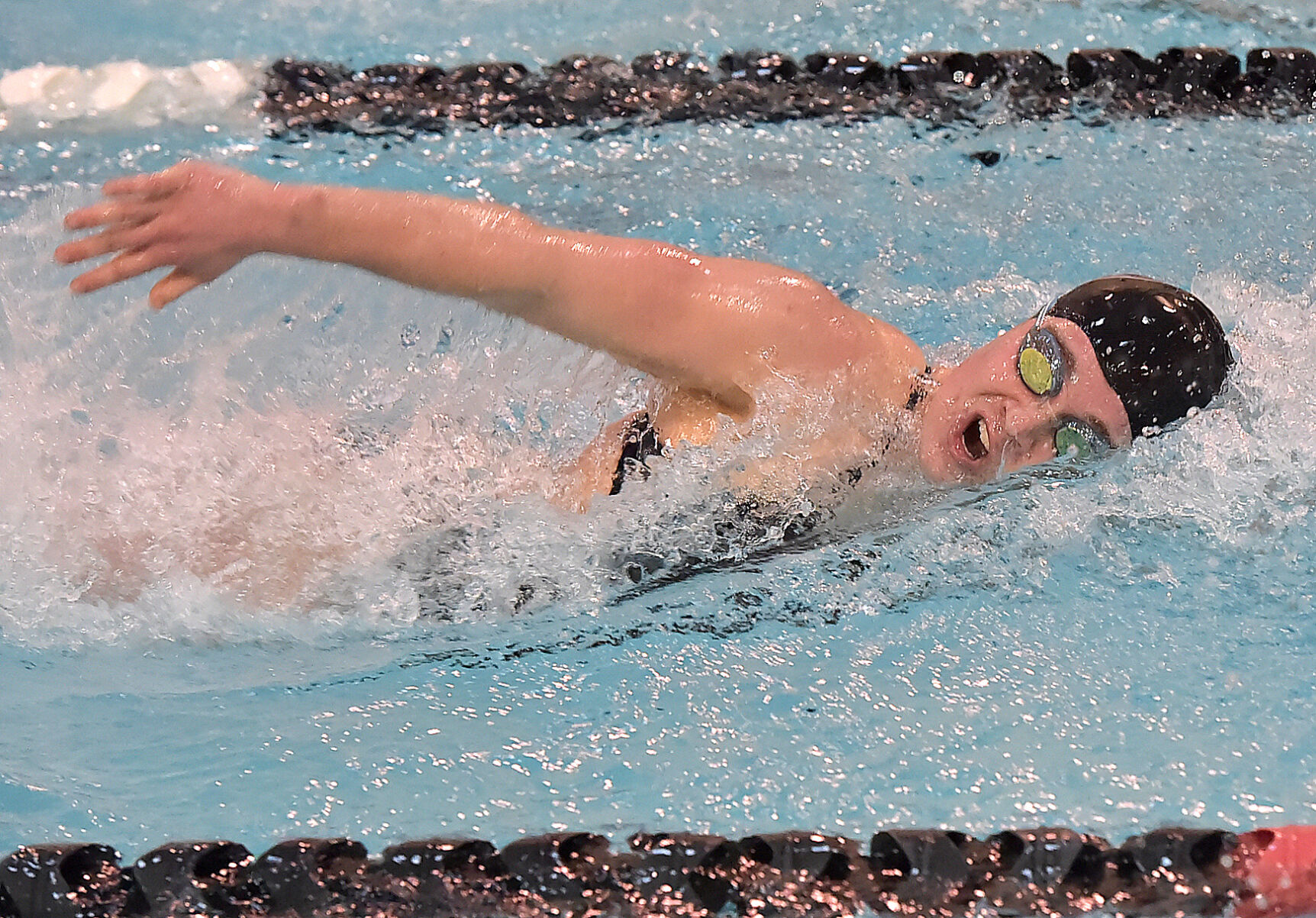 Sydney Bergstrom and Katya Eruslanova had time to chat before the 500 freestyle at the District 1 Class 3A Championships Friday afternoon.

The training partners at Suburban Swim Club knew they arrived at York YMCA seeded first and second, respectively. They knew they each had a shot to break five minutes, neither aiming for best times but solid barometers of progress at the business end of a most unusual campaign.

And they knew they’d push each other in adjacent lanes in the middle of the pool.

Bergstrom won gold, the Strath Haven junior clocking in at 4:58.67. Not far behind was the Haverford sophomore in 4:59.78.

“I knew I had a real good shot of winning it, so I just tried to stay ahead the whole time and keep my stroke really long,” Bergstrom said by phone. “And of course, swimming next to Katya helps.” Bergstrom wasn’t just one of four district gold medalists from Delco; she and Eruslanova were one of a pair of 1-2 Delco finishes.

Especially so far from home at the COVID-19-inspired, socially distanced meet, it seemed a luxury to have a familiar face nearby, especially one that can push you to be better.

“I’m really proud of Casey,” Weaverling said. “She’s an amazing swimmer. I didn’t go against her at all this year because of the Central League splitting up (meets), and she did really well in the 200 free so I thought she was going to catch me in the 100 fly.”

“It’s definitely a good competition,” Cullen said. “She’s so nice, and it makes swimming against her and competing against her really fun and a healthy competition. And she always pushes me – she’s always out really fast so she keeps me on my toes.”

Making the two runner-up finishes even sweeter was that both swimmers also earned victories, Eruslanova in the 200 individual medley and Cullen in the 200 free.

All four wins come with automatic spots in the PIAA championships, a boon all its own with the field diminished to 16 swimmers instead of the usual 32. Only one District 1 swimmer gets an automatic pass to Cumberland Valley instead of the ordinary five. In a season where everything has shifted, the measuring stick for a successful season– reaching states – has changed, too.

So as much as the gold medal, which came sans ceremony since podiums aren’t socially distanced, the guarantee that the season has another three weeks left was a significant prize.

“It’s a huge relief,” Cullen said. “When I saw No. 1, a huge weight was lifted from my shoulders. You’re definitely under more pressure going into districts because there’s not as much room to mess up as much. You have to really be with it this year. The pressure is definitely higher.”

“It’s a huge sigh of relief because all the other districts don’t swim until next week,” said Weaverling, the only senior of the four. “I don’t know if I’m going to make it back in the 100 back, but we’ll see.”

All of those factors – the distance from home, the limited entries (16 individuals, 12 relays), the crush for ever more precious states spots – made for a unique atmosphere, the swimmers said. Not better or worse, but certainly different. “Compared to La Salle, you could hear a pin drop,” Weaverling said. “It was so quiet.”

All four adapted well to the surroundings, a more rarefied grouping where they proved they belonged. It included Delco wins in three of the first four individual events. Cullen took control in the 200 free, an event she finished fifth in last year. Following her race plan to go out fast and hang on, she went 1:50.65, two seconds quicker than at this point last year.

“It felt great,” Cullen said. “I was talking to my coach on Thursday and I knew that I had to take it out faster than I like and trust my training and everything. And I was pretty proud of my swim.”

Strath Haven’s Mia Yancey was fifth (she’d add a medal in eighth in the 100 free), and Bergstrom was seventh.

Cullen is accustomed to quick turnarounds, with both of her specialties in what is usually day 1 of a two-day meet. Friday’s rest period fell in the middle: Shorter than the usual districts, longer than sped-up states. She was fractions slower than a year ago but still behind Weaverling, who admitted having to dance away some jitters. The GV senior was relatively sure about how she felt but less certain about how fit others in the race would be. She banished any doubts with a composed, wire-to-wire win.

In between, Eruslanova showed her veteran savvy, quicker by nearly two seconds from her runner-up time last year in the IM. She knew she’d be behind after fly, but used a strong back half and a distance mindset to build to the lead.

“In the backstroke, I was just trying to keep the same pace as the girl next to me, and in breaststroke, I knew I could get ahead by really going for it,” she said. “And the freestyle, I went all out trying to win.”

The connections between that contingent are more than just a matter of trivia.

“I think coming here, we all want the Central League to do really well,” Bergstrom said. “Even though we’re from different teams, I personally cheer people on from different teams for them to do well. We’re all in this together and we know each other, sort of, so it’s nice to be able to see each other all at once and watch each other race and race against each other.