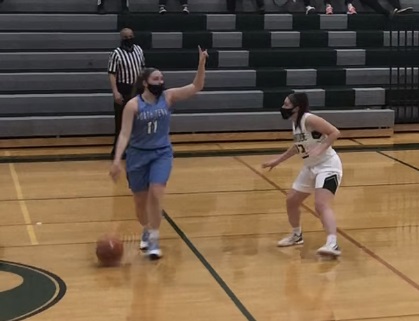 EAST ROCKHILL >> Anybody in Alli Lindsay’s position would have been forgiven for feeling frustrated.

The North Penn senior was the lone returning starter for the girls basketball team, the main focus of every opposing defense, leaned on by her coaches to shoulder the role of leader for a young team and had to manage all of it during a season twice stopped by COVID-19 shutdowns. It wasn’t the senior season she envisioned, especially as losses started to pile up, but Lindsay kept trying to guide her teammates in the right direction.

North Penn turned a corner this week and picked up its second win of the season Friday night with a 45-27 road victory over Pennridge.

“It’s been amazing, it’s been quite the experience but the bus rides have been so much more fun,” Lindsay said. “The positivity on this team is insane. When we were on that streak of losing, everyone felt like they had to do it all themselves but now we’re playing more as a team.”

The Knights (2-8, 1-8 SOL Colonial) have started a pair of freshmen in Caleigh Sperling and Liv Stone most of the season, plus sophomore Abby Plaugher and junior Imani Plaza as two returners who played limited minutes last season taking on larger roles. Naturally, given both her standing as a senior and position as point guard, a lot fell on Lindsay to score, defend, rebound and facilitate all while being closely watched defensively.

In a game that took on a frantic pace with neither team shooting the ball well and both sides getting caught up in the pace with sloppy turnovers, Lindsay provided a steadying hand for North Penn. The senior scored eight of her 13 points in the first quarter and her assist to Sperling put the visitors up 8-6.

Lindsay ended the quarter with a 3-pointer that gave North Penn an 11-6 lead and the Knights wouldn’t trail the rest of the way.

“She has been so huge for our team this year in so many ways and it hasn’t reflected itself in the box scores,” North Penn coach Jen Carangi said. “I think our kids are rallying around her because it’s the end of her senior year and they want to win for her. That’s what I’m so proud of, that after everything we’ve been through, my kids are still playing with such heart and at a level where a lot of other teams would have quit.”

Pennridge (4-10, 2-8 SOL Colonial) has also dealt with the reality of being a youthful team in a challenging season. The Rams have just one senior on the roster in Kiersten Moyer and also lean on a good number of underclassmen to be contributors.

While they want to play a higher-paced game, the Rams simply couldn’t score against the Knights on Friday. Sophomore Katie Yoder finished with a team-high 13 points but also struggled to get her shot going with the rest of her team.

“It was just a tough game,” Pennridge coach Mike Elton said. “We had four games almost in a row to finish out and we talked about getting some positive energy, this game didn’t really do that, but I told them we have to put it behind them and go to the next one.”

The wins haven’t come easy for Pennridge either but Elton said his group has been pretty good about bouncing back from a rough half or game.

“We have a lot of young kids out there and not a lot of varsity experience, so they have to learn,” Elton said. “The games we’ve played really well in, they play as team. I didn’t feel like they did that tonight, they didn’t feel connected and that’s what we have to work on.”

After her big first quarter, Lindsay scored just five more points the rest of the way but Plaugher helped pick her up with 14 points over the final three quarters. Lindsay added nine rebounds, four assists, a steal and drew a charge defensively while Plaugher chipped in seven rebounds, two helpers and three steals.

North Penn dropped its first eight games, several of them agonizing defeats where the Knights held fourth quarter leads. Carangi said one of the biggest changes in her team has been the younger players, especially the freshmen, coming out of their shells and communicating, a statement Lindsay echoed.

“They were tough games, but we hung out, we went to dinners, we wanted to bond and help the younger kids for future years,” Lindsay said. “This year with COVID has been crazy, but we focused on getting those girls experience and putting them in different positions. It meant doing something to make sure we were together most of the time we were able to.”

The Knights had their first COVID-19 related shutdown in preseason and had to start a week later than the rest of their SOL Colonial counterparts, then had to sit out again last week following health and safety protocols. Lindsay, a three-sport athlete, just wanted to play her last basketball season in North Penn colors and admitted the starts and stops were trying.

“My patience has definitely been tested but these girls are amazing and they’ve made it so fun,” Lindsay said. “We’re laughing all the time and as long as I’m having fun, that’s the main thing. It’s something my grandparents tell me after every game. It’s been stressful, it’s not the senior year I expected but I’m good as long as everyone else is having a good time.”

The Knights certainly didn’t have their cleanest game, but aside from a 6-2 quarter run, they didn’t let Pennridge get any sustained spells of momentum. Sperling had seven points, including a three that gave North Penn a 23-13 halftime lead and a Plaugher-Lindsay fueled 7-0 run early in the third extended the advantage.

North Penn wraps up its season Saturday afternoon when it visits CB West. The first meeting was one of those gutting losses where the Knights gave up a fourth-quarter lead and Lindsay would like nothing more than to end her career on a three-game win streak.

“I want them to take away that even if you’re having a rough time or not playing well, you can always get someone else involved,” Lindsay said. “You can make someone else have a good game if you’re willing to help them out. You won’t always have a great shooting game but someone else may and being able to recognize that through the team bond experience is what I’ve tried to focus on.”

Among the other challenge that COVID-19 has presented is the college recruiting process for high school seniors. Lindsay has been through that as well, currently weighing three schools and hoping to play basketball and lacrosse at the next level but her ability to visit campuses and connect with coaching staff has been limited.

“We’ve had two shutdowns, it’s been really tough on all these girls but the positivity, they never talk negative about each other,” Lindsay said. “These girls have been the best. Even though I’m a few years older than them, it’ll be me and the freshmen and sophomores so I have to drive them everywhere but they’re the funniest group of girls, we’re laughing all the time and I’m just happy I got to finish here with them.”