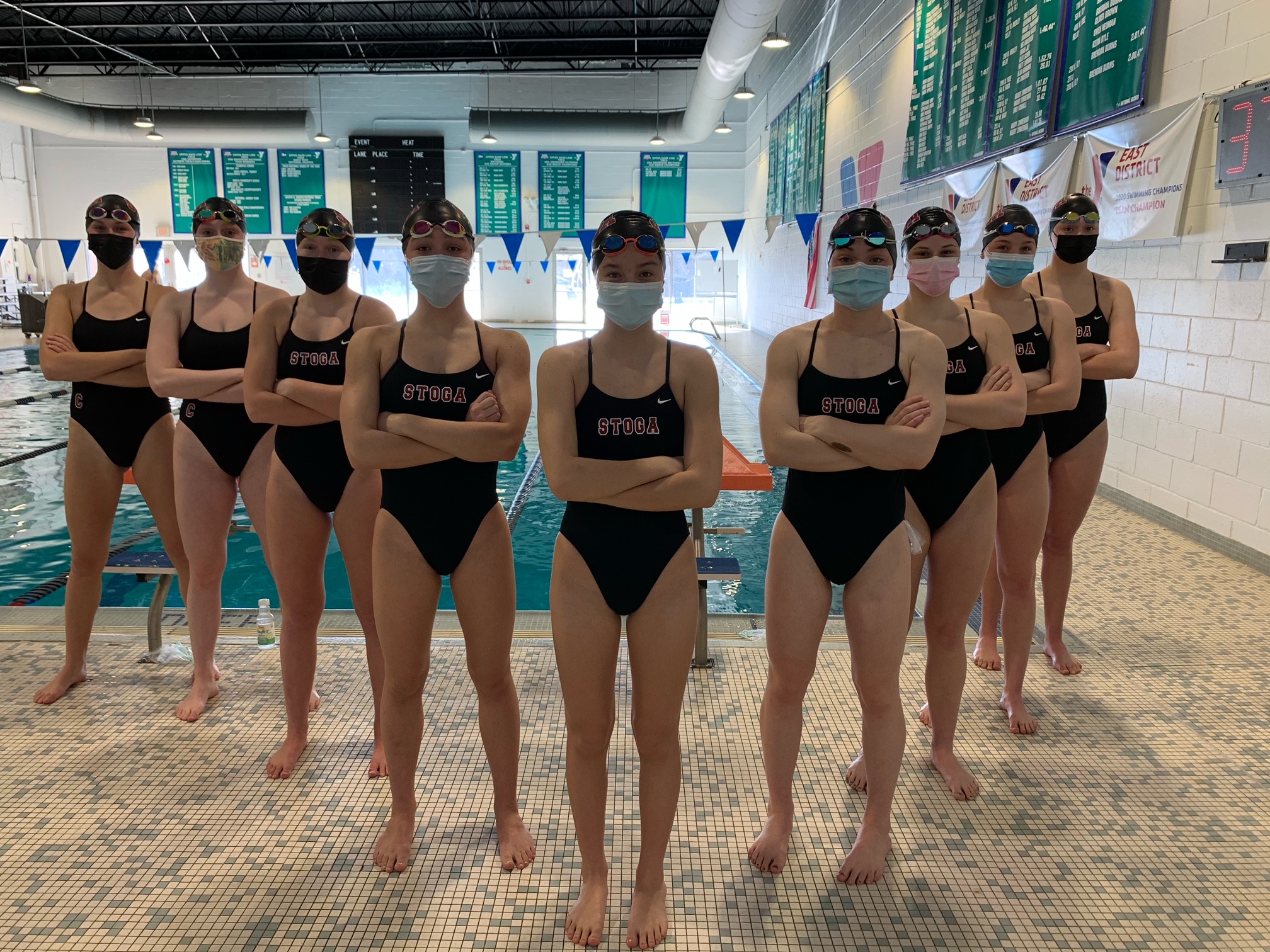 Conestoga captured the PIAA District 1 3A girls swimming championship title Friday at the Graham Aquatic Center in the York YMCA with a dramatic finish.

The Pioneers were tied with North Penn 186.5-186.5 with one event remaining – the girls 400 free relay, an event in which Conestoga was seeded sixth, North Penn second.

The Pioneers, featuring a quartet of three sophomores and one junior, won the 400 free relay with a time of 3:30.21 to take home the top prize, finishing with 226.5 points to North Penn’s 218.5 (NP placed third in the final relay).

The girls 400 free relay was the only event Conestoga won Friday. The Pioneers won the district title with overall depth, scoring in 10 of 12 events. This is the first District 1 3A girls’ swimming title Conestoga has won since 2008.

“Our girls were really focused,” said Conestoga girls swimming head coach Rob Kirkby. “They were ready to rock and roll, and they really came through today.”

“Delaney took it out amazing fast,” said Kirkby. “Lily, going second, got us out to a two-second lead.”

Conestoga received a second-place finish from sophomore Naomi Furman in the girls 100 breast (1:05.14).

“Naomi’s performance [in the 100 breast] was a big key for us today,” said Kirkby. “She had an amazing finish.”

The Pioneers were third in the girls 200 medley relay, with a quartet of Kallie Whitaker, Naomi Furman, Delaney Burns and Lily Robinson (1:46.61).

Conestoga was 10th in the 200 free relay, as the quartet of Audrey Laganelli, Jena Nowoswiat, Ava Collin and Kallie Whitaker clocked 1:39.56.

Earlier in the week, Conestoga’s Grace Gallagher placed fifth in the District 1 3A diving championships.

Here’s a look at how the Ches-Mont schools fared at the District 1 3A girls swimming championships:

Downingtown East, which finished fourth, had the Swimmer of the Meet in sophomore Alexa Fulton, who finished first in both the girls 50 free (with a district meet record 22.98) and girls 100 free (50.49).

“We had an unbelievable day,” said D-East swim coach Gigi Graesser. “We had so many swimmers posting PRs today.”

The Cougars finished second in the girls 400 free relay with a foursome of Alexa Fulton, Victoria Maki, Lindsay Blake and Grace Bousum, clocking 3:30.53 in the first heat.

The Cougars finished 11th in the girls 200 medley relay, with a quartet of Lindsay Blake, Grace McElroy, Grace Noble and Cady Kiebort (1:50.42).

In the girls 200 free relay, the top-seeded quartet of Emma McGovern, Madelyn Lowe, Molly Carson and Izzy Iwasyk finished first with a time of 1:35.77.

In the girls 200 medley relay, the second-seeded foursome of Molly Carson, Emma Shields, Madelyn Lowe and Izzy Iwasyk captured the top spot with a clocking of 1:45.45, and Iwasyk finished the relay with a 22.82 in her 50 free split.

Iwasyk, a freshman, placed second in the girls 50 free with a clocking of 23.42.

Molly Carson set a school record in the girls’ 100 back with a clocking of 55.67, finishing second in the event to Upper Dublin’s Meghan DiMartile (54.94).

West Chester Henderson, which finished seventh in the team standings, got a second-place finish in the girls 200 free relay from the quartet of Katie Simpson, Rylee Kelly, Shannon Gamble and Krista Marlin (1:36.30).

Downingtown West  senior Tori Howard finished sixth in the girls 100 back at the District 1 3A championships with a clocking of 56.66 (she had been seeded eighth) and the Whippets finished fifth in the girls 200 medley relay (1:47.88) with a quartet of Tori Howard, Alexa Houseknecht, Alicia Littler and Katie Toth.

Kennett senior Sydney McCracken finished in first place in the girls 100 breast, clocking 1:03.64, ahead of second-place finisher Naomi Furman of Conestoga (1:05.14). McCracken also placed fifth in the girls 200 IM with a clocking of 2:06.33.

West Chester Rustin got a 10th-place finish in the girls 200 medley relay (1:50.30) from the quartet of Flynn Truskett, Sara Jackson, Lily Turco and Sofia Piccone.

Great Valley senior McKaylie Sullivan finished fifth in the girls 100 fly with a clocking of 56.36.

Villa Maria Academy, which had captured 18 consecutive PIAA District 1 2A swimming titles, was looking to make it 19 straight first-place finishes at the District 1 2A championships Friday at the Graham Aquatic Center in the York YMCA.

The Hurricanes’ streak was snapped, as they finished third, behind Springfield Montco (289.5 points) and Lower Moreland (238.5), recording 196 team points.

“Our girls swam very well,” said Villa Maria swimming coach Fritz Schumann. “Nearly all of our swimmers swam their best time of the season today, and this was a difficult season to do that since it was shorter than normal. I’m proud of our swimmers, and I’d like to congratulate Springfield – they’re a great representative as the new [District 1 2A] champion .

“The atmosphere was different today than in past years, with the 3A meet being held later in the day. It’s a very big pool at York, so instead of having the 3A swimmers alongside us in the pool area, the place seemed empty. And because there were no spectators allowed, the girls really had to reach down deep without the crowd noise to pump them up.”

One Villa Maria swimmer who stood out was senior Madeline Ladd, who captured her third consecutive District 1 2A title in the 100 back. She was clocked at a season-best 1:02.10, ahead of second-place finisher Callie Walker of Nazareth Academy (1:03.01).

“Coming into the third turn, it was pretty tight, I could feel [Walker] being close to me, but coming down the stretch I tried to kick in all that I had,” said Ladd. “I’m glad I was able to win points for our team.

“The atmosphere [at Districts] was definitely different than in past years, with no spectators and no 3A swimmers in the pool area, so we really had to push ourselves  individually, because there was no crowd noise. I was really focused since it was my last Districts meet.”

As a District 1 2A winner, Ladd qualifies for the PIAA 2A state championship meet.

Only the District 1 2A event winners qualify for States, along with eight at-large swimmers from across Pennsylvania for each event – there will be 16 swimmers for each event at Class 2A States. King and Ladd are the only two Hurricanes who are advancing to the PIAA 2A state championship meet.