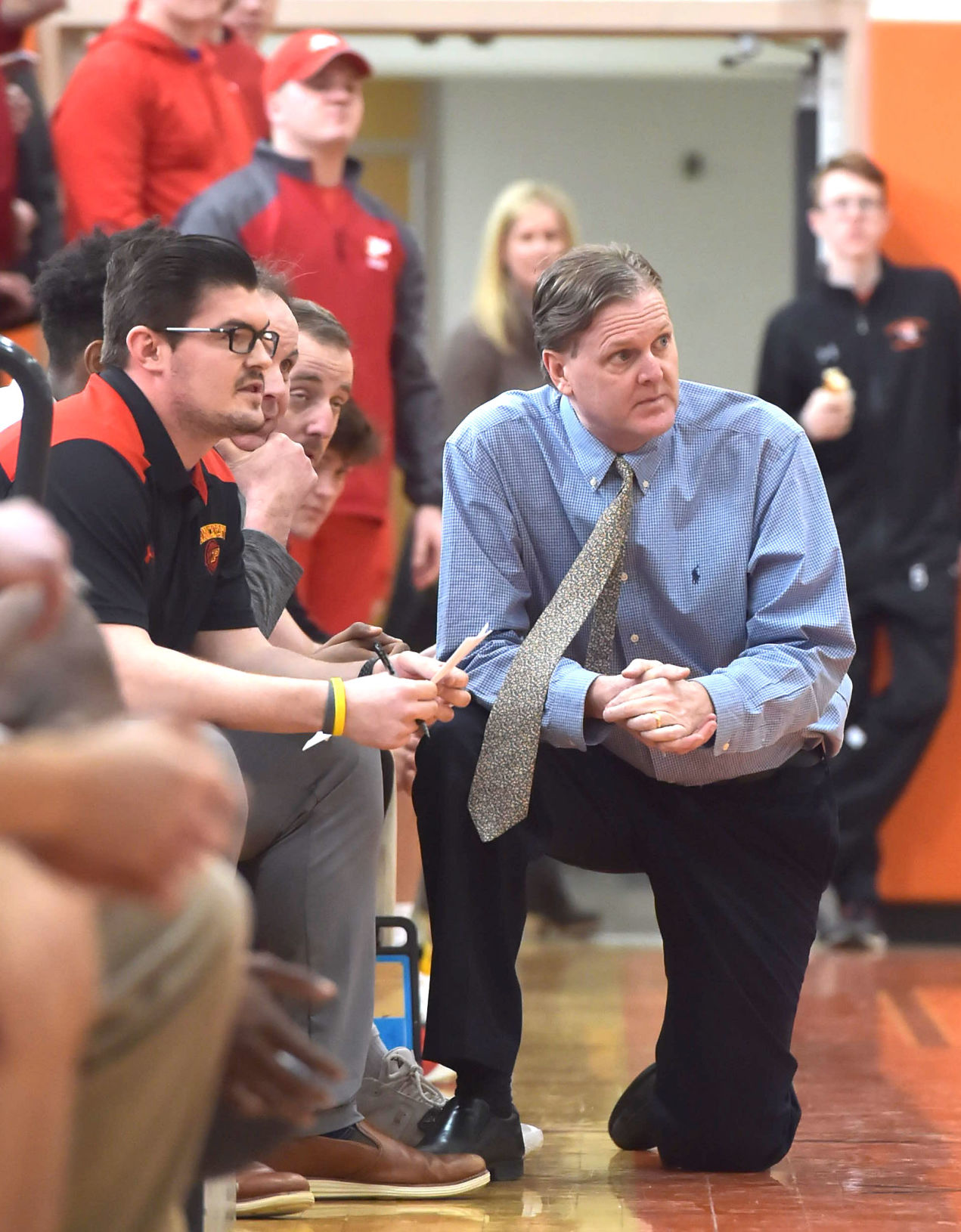 Instead of the whiteboard, the huddle, the blazer ever in risk of being jettisoned, the pre-game prep is more orderly. There’s a folding table, a Hudl stream, and a yellow legal pad set up in his living room.

Other aspects of the routine, though, aren’t so easily shaken.

“After game 3, the dog would disappear and hide,” Doyle said this week.

Doyle isn’t on the sidelines in person this season. Diagnosed more than two years ago with chronic myeloid leukemia, the COVID-19 pandemic presents a dangerous threat to Doyle’s dampened immune system. In the interest of safety, his medical team and family determined it wouldn’t be safe for him to teach in person this season, and thus, he wouldn’t be on the sidelines.

So in the same space that he conducts classes virtually, Doyle also stays in touch with the basketball team he has coached for 18 years in the newly invented position of virtual assistant coach.

At the controls on the sideline is second-year assistant coach and former Bonner-Prendergast assistant Billy Cassidy, with longtime Doyle staffer Sean Tait. Behind the scenes, Doyle tries to contribute what he can, from practice preparation to game-planning to the logistical requirements that have grown exponentially in the coronavirus era.

“The main thing that we went about doing was to let Billy concentrate on just coaching basketball,” Doyle said. “There’s so many logistics and things that go on behind the scenes, and then that issue is magnified during the pandemic.”

There’s no template for what Doyle and the Penncrest staff have assembled this unprecedented season. The plan, which Doyle is grateful to the school’s administration for buying into, is designed as a one-off. But it requires creativity, especially on the technical side.

Take, for instance, the Lions’ Feb. 9 game at Strath Haven. Two days before, Doyle joined his team via Zoom to break down game film of the previous meeting with the Panthers, an overtime loss, and the preceding game, a loss to Marple Newtown. Using the now ubiquitous video software, he could meet with players individually and screen-share snippets of the game film or practice video, which he streams from home.

The day before the game, Doyle is able to Zoom into practice remotely, helping install plays or tactics for the next day.

But once the game tips off, it’s in Cassidy’s hands. So in consultation with the coaches, Doyle can suggest things like the ultimately decisive maneuver against Haven to box-and-1 Panthers top scorer Luke Edwards with little-used reserve Jimmy Cage, leading to a 54-53 Penncrest win. But the choice to go to that and how long to stick with it rests with Cassidy.

Doyle’s halftime contribution is a technologically modified tradition he’s had for years: As the head coach, Doyle would go around the room to each of his three or four assistants for feedback on the first half. This year, Cassidy is the one proctoring, and Doyle is a voice on speakerphone for at most three or four items to address or reinforce.

“It’s truly like an assistant coach,” Doyle said. “And I think as we’ve all found out this year, we’re all able to do a lot virtually, so I was able to, I think, be helpful in that position.”

The Lions have taken their lumps, at 4-9 this season while trying to replace four starters from a season ago.

It hasn’t been easy on Doyle either. The program stresses community, and he’s been physically absent from that group, which includes his youngest son Liam, a freshman. That’s even before having to flash back to the late 1990s for the last time he was an assistant, with Phil Martelli at Saint Joseph’s University for nine years.

No app can effectively substitute the usual hands-on nature of the daily grind in the gym.

“It’s probably the most stressed I’ve ever been because I have no control over it,” Doyle said. “You see things and follow things, and I was an assistant for nine years for Martelli, but 28 years as a head coach, and it’s very, very stressful in not being able to pull those strings or make those changes or talk to players on the fly.”

On balance yes, but that hasn’t stopped a parade of 1,000-point scorers this season. First was Carl Schaller of Garnet Valley and Haverford’s John Seidman getting there on the same day earlier this month. Seidman is just the fifth Ford to hit the mark and first since 2001.

Last week, Lew Robinson became the first Radnor player since 2006 to hit the milestone. One underclassmen who got there last year, Daily Times Player of the Year Karell Watkins, keeps rocketing up the list, approaching Raymond Carroll for eighth on the Chester all-time scoring list. And a couple more additions to the exclusive club of now 238 members could be coming in the postseason.

Keep an eye out for a revamped list of the 1,000-point club once the season ends.

(Minimum half of team’s games played)
Points Per Game

Based on games reported to the Daily Times through Feb. 24