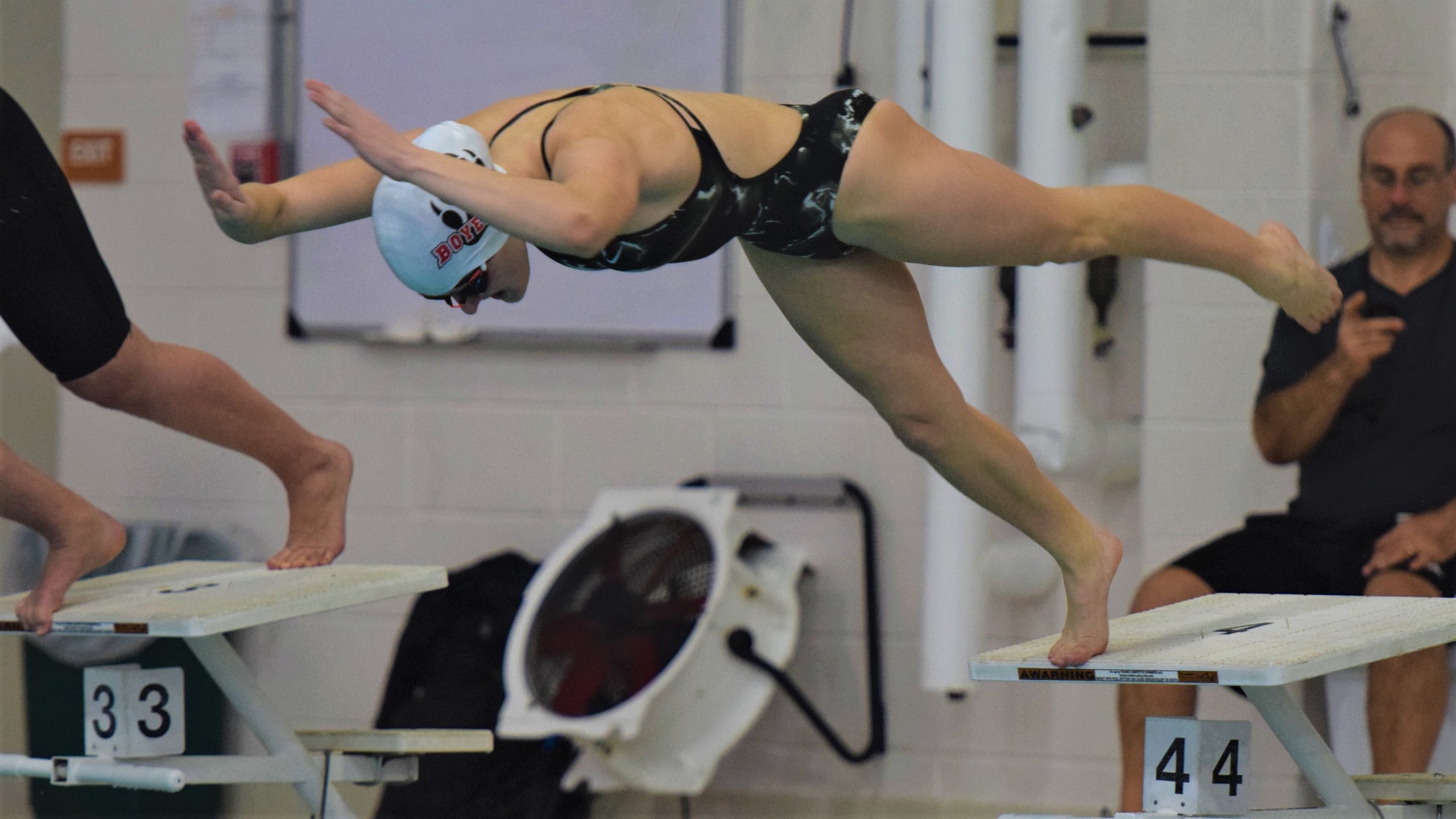 There was a time early in her swimming career when Gabby McKee would have preferred to stay away from the pool.

“I kind of hated it when I was younger,” the Boyertown senior said. “I wanted to do gymnastics but my mom told me I had to swim or do nothing, so I was like, ‘Alright, I guess we’ll just swim.’”

Those days are well past McKee. Since about age 13 or 14 she’s had a desire to excel and improve in the sport that continued into her time with the Bears, which made this past week so difficult.

McKee was supposed to be practicing for the District 1 championships, which took place Friday. Instead, she was quarantined in her house after finding out Monday she would have to miss the race due to COVID-19 contact tracing. Freshman Tama Engler was also qualified to compete but forced to miss the meet.

“I can’t believe it,” Boyertown coach Bill Draves said. “The kids are devastated, but we have to abide by the guidelines.”

Physically McKee said she was feeling fine, but this week has been a mental struggle during what was anticipated to be one of the highlights of her high school career and the culmination of a lot of hard work.

“She’s a very, very tough competitive girl,” father John McKee said. “She looks forward to get better, to improve and that really is her mantra to a T. When we got this announcement on Monday it broke her heart. McKee has been one of the Mercury Area’s top swimmers over her career at Boyertown. She is committed to swim at Ohio University in 2020-21.

She was a state qualifier in her freshman season and was a finalist at the PIAA championships as a sophomore and junior, finishing 13th in both the 500 freestyle and 200 individual medley in 2019 and fifth and 11th, respectively, in the two events last season.

“Gabby did and does everything right,” said Draves, who coaches McKee at both the high school and club levels. “To be denied this because of the COVID it’s just horrible, especially for her senior year.”

With a reduced field, McKee was ready to prove she was one of the best in District 1. She had goals of winning at least one of her races.

“I was really excited because less people were going so it was more competitive,” McKee said. “If I would qualify, it would be really nice to compete against all those great athletes.”

“She popped off a really good time at the last dual meet we had with OJR,” Draves said.

Districts and states have been on McKee’s mind since last spring when she and everyone else were stuck in their house in the initial weeks of quarantine.

During stretches this past calendar year when she wasn’t able to get into the pool, McKee said she spent time working out on the gym equipment in her basement as well as running and cross training.

“I guess I was trying to think about the end results, staying in shape for a big meet so I could do well and pull out a good time,” McKee said.

McKee is unsure when she will be able to get back in the pool, but she will be at home for at least the next week.

With no districts or states for her this season, a consolation for McKee will be the chance to compete at the International Swim Coaches Association Senior Cup from March 23-27 in St. Petersburg, Fla.

“I have that to look forward to I guess,” McKee said.

John McKee anticipated his daughter would invest her time pouring over psych sheets, result times and watching the day’s events Friday as she mentally swam the meet she’d look so much forward to.

Though the disappointment was fresh Friday, McKee was able to go over some of the highlights of her career and the past season.

She remembered accidentally pulling a teammate into the pool in celebration after the 400 relay of last year’s Pioneer Athletic Conference championships.

This season she said one of her favorite moments was watching Engler swim a 1:06.98 in the 100 breaststroke in the team’s final meet against Owen J. Roberts, which qualified her for districts. McKee set a pool record (1:53.31) in the 200 free at the same meet.

Guiding her teammates in a season significantly impacted by the COVID-19 pandemic was very important to McKee in her final season.

“It was a wacky year,” McKee said. “I tried to make everyone as comfortable as they could with this year going on. I would try to motivate them and encourage them whenever they had a good race or even if it was a bad race.”