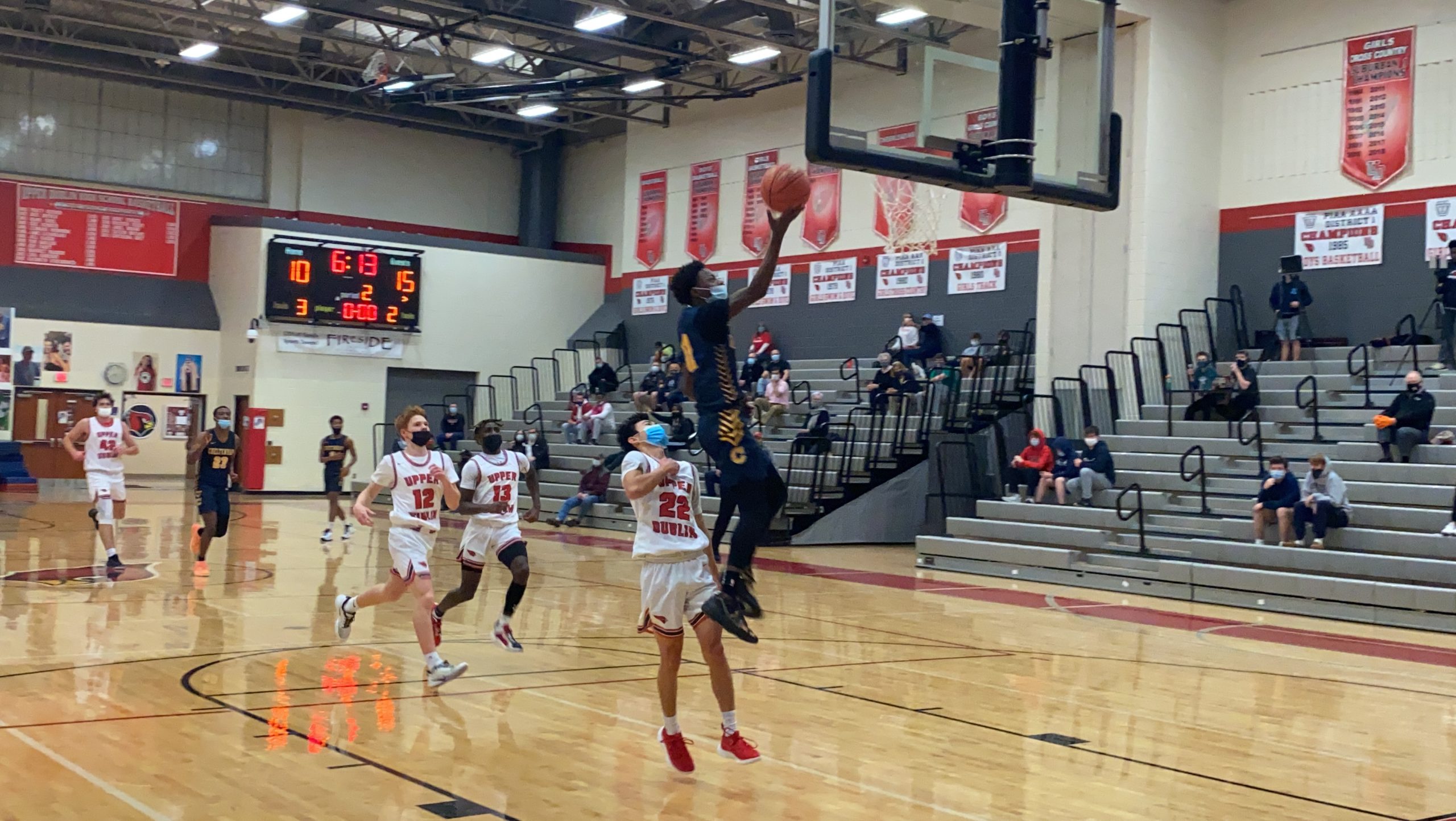 Cheltenham's Saleem Payne (11) soars in for a layup during the second quarter of the Panthers' game against Upper Dublin on Thursday, Feb. 25, 2021. (Mike Cabrey/MediaNews Group)

UPPER DUBLIN >> It may not make the typical highlight reel but it was Cheltenham boys basketball coach Patrick Fleury’s favorite moment Thursday night.

The Panthers up 18 points on host Upper Dublin in the third quarter but still locked in for a long stretch of half-court defense. The Cardinals’ string of perimeter passes yielding little results before Rasheem Dearry’s try at a steal forced a ball to deflect out of bounds for a turnover.

“Even though that’s not a dunk or a three, that’s a momentum play for us,” Fleury said. “And defense like we talked all the time, our coaches we come in with a play and everyone has their role in what they do and it just flows.”

The defensive pressure began producing results in the second quarter – Cheltenham built a 13-point lead at halftime and kept the margin in double digits until the last minute in the Suburban One League nondivision matchup as the Panthers kept their perfect record intact with a 58-50 victory.

“Defense was great,” Cheltenham’s Mike McClain said. “It was really our defensively intensity that we had to pick up in recent games and we did that today.”

Saleem Payne scored 14 of his game-high 20 points in the first half for the SOL Freedom champ Panthers (11-0, 9-0 division) while McClain provided a trio of breakaway dunks and tallied 10 of his 13 points before the break.

Cheltenham capped the second quarter with a 15-5 run to lead 32-19 at the half then scored the first seven of the third – Payne’s fast-break layup giving the Panthers their largest advantage of the night at 39-19.

“To the coaches, I mention it every time but they’re just amazing,” Fleury said. “Having them there with the guys, there’s so many more eyes and it just seems at times we play in spurts at times but for the most part I thought we stuck together and our coaches whenever we saw anything they addressed it right away and I think that was just there’s a reason that we were able to be successful.”

Upper Dublin (9-7, 5-4 SOL Liberty) whittled its deficit down to 13 at the end of the third after Drew Stover’s three-point play with 6.6 seconds made it 45-32. But Cheltenham pushed its advantage back up to 19 in the fourth and was leading 57-40 before a late burst by the Cardinals brought the final margin to single digits.

Cheltenham kept Stover, a recent Millersville commit, in check for most of the contest but the UD senior still registered a team-best 19 points, 13 coming in the second half. DJ Cerisier had 11 points while Colin O’Sullivan posted 10 points for the Cardinals, who dropped their second straight.

“I think Brandon Hawkins and Elias Walker and along with Ife West-Ingram did an amazing job just being in rotations, being in help, being active,” Fleury said. “Brandon hit a couple momentum threes for us, Mike was attacking the paint, ‘Leem  was doing what he normally does and getting guys involved and taking the openings so for us it was just good.”

The Panthers, second in the District 1-6A power rankings, look to complete their second straight undefeated conference/division season when it completes SOL Freedom play Saturday visiting Upper Moreland at 1:30 p.m.

Cheltenham went 14-0 in claiming the American Conference crown in 2019-2020 and so far has cruised in Freedom Division competition – winning its nine division games so far by an average of 18.1 points.

“I feel like we’re first in everything, first in the district, class, conference,” McClain said. “We just trying to win everything, go undefeated the whole season.”

Upper Dublin, 17th in District 1-6A with 20 making the postseason field, finishes its SOL Liberty schedule on the road at Abington 11:30 a.m. Saturday.

The Cardinals led just once Thursday at 2-0 before Cheltenham ripped off 11 straight points – six by Payne, who capped the run with a layup off a steal then knocked down a jumper.

“He gets out and he scores, we look more so for the defense, like I didn’t even know he had 14 (in the first half) but defensively I thought he was solid, said Fleury of Payne. “I just felt like he can lead us, at least at his position regularly and that’s what we looked at. So we saw it is a solid thing. I expect him to get out and make plays when he has them, that’s just been him.”

Three-pointers by Cerisier and O’Sullivan had Upper Dublin trailing just 11-8 at the end of the opening eight minutes.

Four straight points for Stover had the Cards down 17-14 in the second quarter but a McClain dunk off a steal and back-to-back Payne baskets pushed the Panthers lead to nine. Another McClain slam after he intercepted an inbounds had the visitors up 25-15.

“Mike is a kid, earlier in the year he had 29 on 10 shots so he understands just the flow of the game,” Fleury said. “He’s very intelligent and he continues to just work.”

Joey Weimer’s trey gave Cheltenham a 30-17 lead with the Panthers going into the break ahead 13 after  Payne’s two free throws with 2.6 seconds.

“It was definitely us playing a little selfishly including me in the first quarter,” McClain said. “Second quarter we definitely moved the ball more, started getting more open looks and assists.”

Payne began the third with a lay-in off his steal while a Hawkins three and a Payne fast-break layup after a McClain steal had Cheltenham’s lead at 39-19.

Consecutive 3-pointers by Noah Lee had UD within 40-27 but the Panthers pushed their advantage back to 16 twice – the second time at 45-29 on a Justin Savage slam before Stover’s three-point play at 6.6 seconds had the Cards again down 13 entering the fourth.