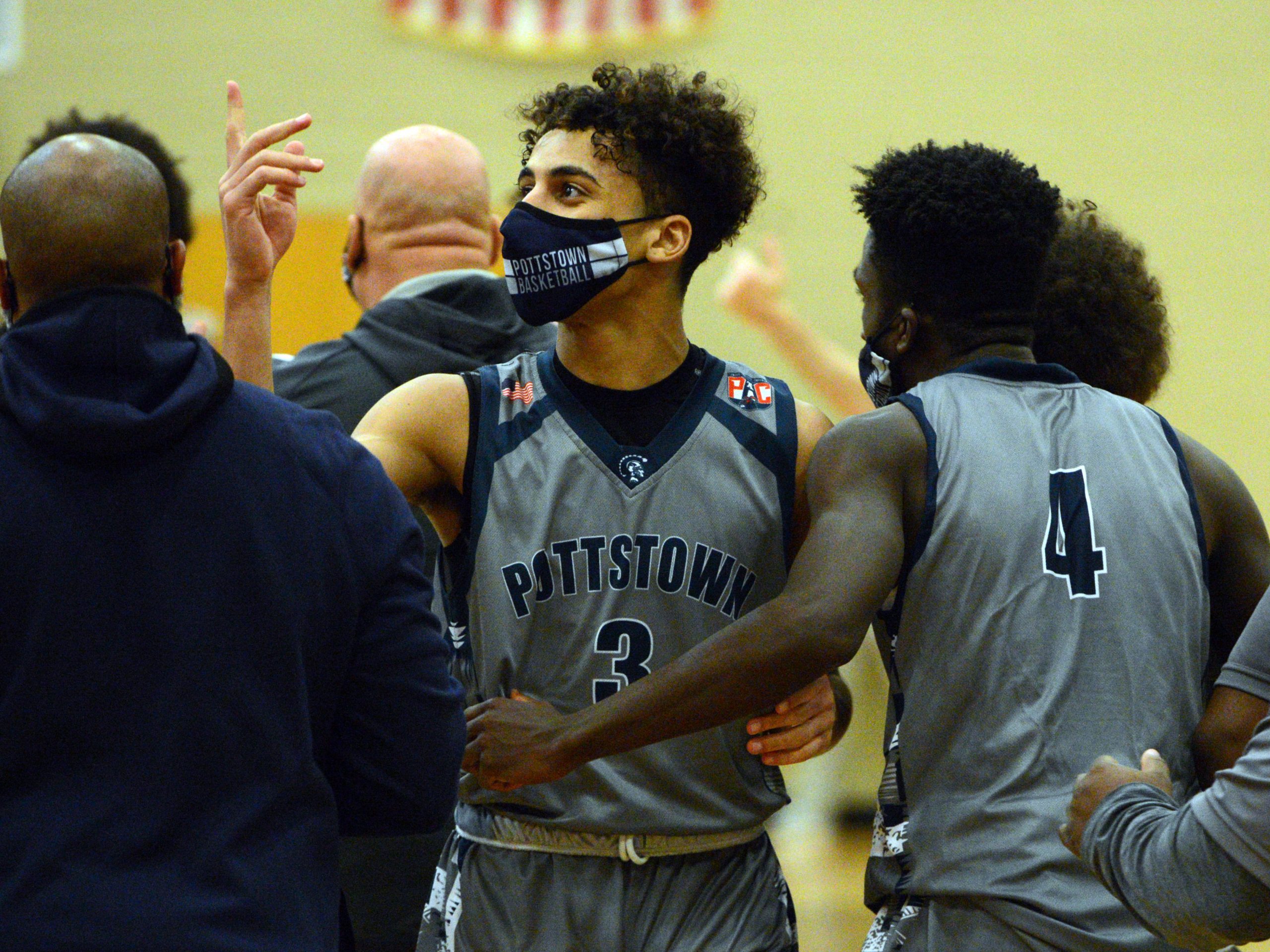 POTTSGROVE >> Pottstown senior Darius Smallwood knew he’d have the ball in his hands in the final seconds of Wednesday’s game at Pottsgrove.

With fellow seniors Jahzeel Watson and Corey Cottman both on the bench — Cottman in street clothes and Watson fouled out — options were limited.

Though he’d had a quiet game up until that point, Smallwood proved the right man for the job, floating in a layup with 2.1 seconds left to give the Trojans a 58-56 win over their rival Falcons.

Watson led the Trojans with 18 points and sophomore guard Joneil Oister scored 14. Senior guard Shawn Majors poured in a game-high 20 for the Falcons with senior Luke Kaiser scoring 10 to join him in double figures.

“I did not want to lose, especially the last game against them for the very last time,” said Smallwood, who finished with eight points and a handful of blocks. With his team trailing 56-53, Oister knocked down a three with 14.6 seconds left to tie the game 56-56. After a Pottsgrove turnover, Pottstown ended up with the ball underneath the Falcons’ basket with 7.8 seconds left.

Despite having just two of its usual starters out on the floor — Oister and Smallwood — the Trojans ran their inbounds play to perfection.

Smallwood inbounded to Oister and hopped in bounds before getting the ball right back. The senior forward took one dribble to his right before floating the ball softly off the front of the rim before it fell through the net.

The Trojans rolled the Falcons 65-33 last Saturday and another rout seemed to be on its way Wednesday when Pottstown jumped out to a 9-0 lead.

Playing in its final crosstown rivalry game, a senior-laden Pottsgrove team wasn’t going to lay down this time. Sparked by a pair of threes by senior James Thompson, the Falcons responded with 11 straight points to take the lead and it was a competitive contest the rest of the way. Majors looked like he had the Falcons on the way to a victory with 1:24 to play when his three off a feed from Manny Allen gave Pottsgrove a 55-53 lead. Kaiser followed the play by taking a charge on the other end and knocking down a free throw with 34.7 ticks left to extend the advantage to 56-53.

After Oister tied the game and Smallwood put the Trojans ahead, Pottsgrove ran a pretty impressive play of its own to get a decent look at a three for the win, but the buzzer beater was no good.

Allen had eight, Thompson had six and seniors Zion Dyches and Nick Stringer both chipped in five for Pottsgrove.

“We really wanted this bad,” Majors said. “We haven’t been winning a lot this year, so this would be a big one against our rival but they upset us the last couple seconds.”

Pottsgrove ahead 55-53 with the ball and 1:24 to play. … Manny Allen finds Shawn Majors in the corner for 3. Luke Kaiser takes charge on other end. pic.twitter.com/e5V5V7MeJK

Majors’ 20-point night followed a 25-point outing in a win against Upper Perkiomen on Tuesday night.

After a slow start to the season, the senior is blossoming during the final stretch of his Falcons’ career, reaching double figures in four of his last five games while he comes off the bench.

“We had a conversation very early in the season, when he probably wasn’t playing as much as he’d like,” Pottsgrove coach Jack Flanagan said. “I said, ‘Who’d you rather have call out your name, the public address announcer at the beginning of the game or me in the last five minutes to win a basketball game?’ … Some guys want to be starters and some guys want to be finishers. That kid’s a finisher. For him to get that I think is the reason I want to coach or anybody should want to. He realizes that bigger goal that’s out there.” The Trojans only had seven players suited up for Wednesday’s game with Cottman and sophomore Nyles Bunn-McNeil both out. They were down to five late in the fourth when starters Watson and sophomore Rashean Bostic, who had six points, both fouled out.

Sophomore Terryce Phillips and sophomore Elija Moore-Palmore both rose to the occasion with eight and six points, respectively. Senior Christian Albert also came off the bench to provide the Trojans some key minutes.

Stepping into Cottman’s shoes at the point, Oister helped keep the group poised throughout the game and down the stretch.

Pottsgrove finishes with games against Pope John Paul II on Friday and Owen J. Roberts on Saturday, while the Trojans have just one game, Monday against Spring-Ford, left on their schedule.

“It felt good to catch this win,” Smallwood said. “We want to finish strong. We have one more game Monday against Spring-Ford. Hopefully that goes well.”