Penn Charter’s fourth-quarter press too much for Germantown Academy 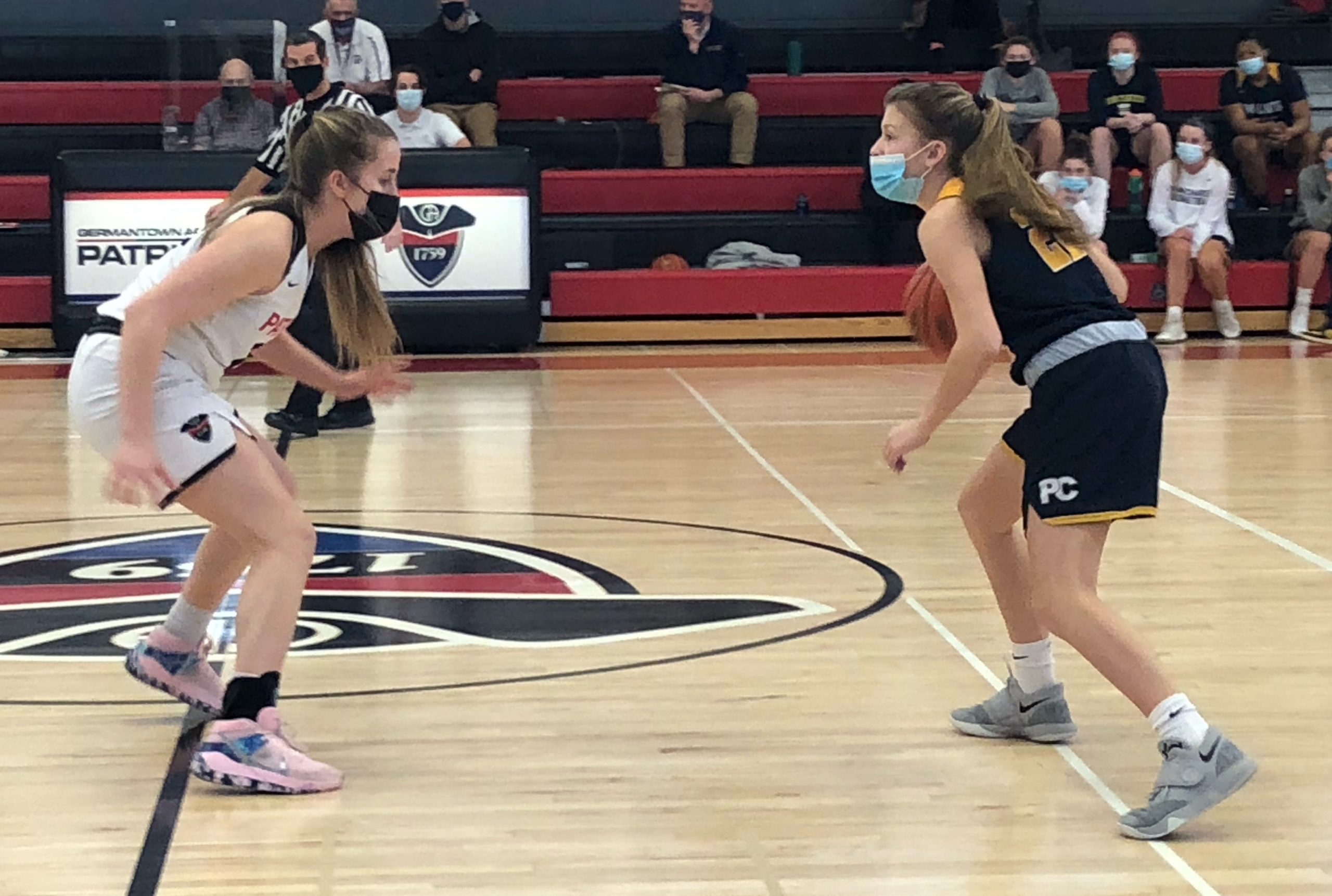 WHITEMARSH >> Aleah Snead didn’t even pause to think when she identified the difference-maker for Penn Charter.

Locked in a close battle with rival Germantown Academy on Tuesday, the Quakers flipped the script with their defense. Penn Charter got the Patriots sped up and caused quite a few turnovers that helped the Quakers take the lead then take control.

“We just pressed and played aggressive,” Snead said. “All five of us on the floor had to be aggressive and we got a lot of turnovers because of that.”

GA, which has five freshmen and two sophomores in its rotation, showed its inexperience down the stretch Tuesday but for three quarters, went toe-to-toe with last year’s PAISAA runner-up. Snead, who scored 17 points, gave the Quakers a 16-14 lead after the first quarter on a runner in the lane with 6.2 on the clock.

The teams traded the lead back-and-forth through the opening three quarters, with neither side pulling ahead by more than five until Penn Charter’s opening run of the fourth. PC’s defense didn’t just show up in the fourth, with the visitors holding the Patriots scoreless for a four-minute spell in the second that helped the Quakers to a 26-23 halftime lead.

“It’s a mindset you have to be in to play good defense,” Snead said. “We always feel defense leads to our scoring.”

GA came back strong in the third quarter, scoring the first five points of the frame and closing on a 5-1 spurt to claim a 35-33 advantage going to the final eight minutes.

“Today showed us we have to play harder,” Patriots freshman Sam Wade said. “We have to want it more, we need to have more fire on the court and play together as a team.”

Bella Toomey, Snead and Kelsey Bess led a 9-2 run to open the fourth quarter, with a corner three from Snead staking the Quakers to a 42-37 advantage with 5:24 left in the game. All three players reached double figures, with Bess leading all scorers in a 17-point effort while Snead posted 16 and Toomey chalked up 14.

PC kept the run going over the next 90 seconds, using a trio of Patriots turnovers to hit a double-digit advantage at 48-37 midway through the period. Snead, who recorded two of her five steals in the final quarter, said the Quakers wanted to make the younger GA players handling the ball uncomfortable trying to break their press.

“We knew this year they have a lot of new players and freshmen, so we wanted to get up on them,” Snead said. “It felt great to beat them for our seniors.”

Wade felt it was a snowball effect on the court once Penn Charter started forcing turnovers. In total, the Patriots gave the ball away 10 times in the final frame with two baskets by Wade their only scoring until the final 2:30 of regulation.

“It kind of got all of our confidence down, it felt like there was no hope,” Wade said. “Their defense gave us problems, it seemed like they had more hustle and we didn’t have enough energy. It didn’t look like we wanted it more.”

Wade led GA with 12 points while sophomore Kendall Bennett had 10. Sophomore Josie Munson gave the hosts a lift off the bench with nine points and three assists while senior Jessica Moore had nine points.

GA has three games left, all of them at home, starting Wednesday against Agnes Irwin. The Patriots also host Episcopal Academy on Thursday and Notre Dame on Saturday to wrap up their month-long sprint of a season.

“I think we’re finally starting to play better together,” Wade said. “I think if we had more games, we could show how we’re coming together, but it can definitely help us for the coming years.”

With only a limited amount of time to play games this season, all the Inter-Ac teams are trying to take as much as they can from whatever time they get on the court.

“We’re trying to use this to prepare us for next year,” Snead said. “Eight games is nothing compared to, I think we played 32 last year, so we’re just trying to get better.”