Malvern Prep’s offense erupts in second half against Germantown Academy 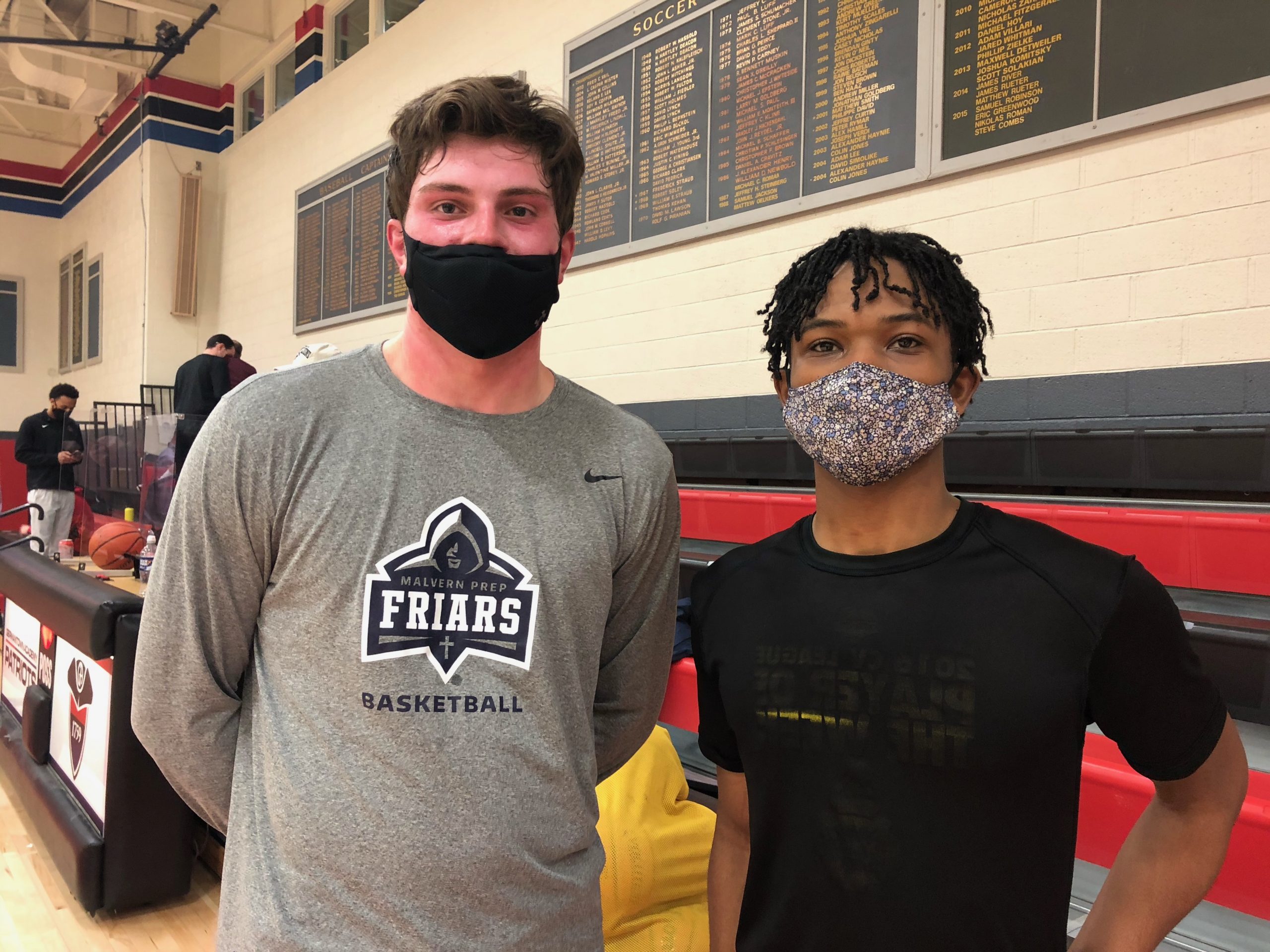 WHITEMARSH >> Malvern Prep knows it can score, but even the Friars were a little taken aback by their third quarter Tuesday.

A four-point game with 5:45 left in the quarter quickly turned into a blowout as the Friars caught fire and hit from anywhere and everywhere on Germantown Academy’s floor. Malvern Prep didn’t slow down either, taking some of the luster off a day of celebration for GA to win the season series.

The Friars dominant second half led to a 82-64 win over the Patriots Tuesday night.

“We just turned up our defensive intensity, the zone was really working for us and our shooters got a lot of open looks,” Friars forward Fran Oschell said. “For us, defense leads to offense and when we have that going on, I feel like our shooters tend to heat up.”

Longino didn’t force anything and let the game find him, but with 52 seconds left in the quarter, he sunk a 3-pointer off the left wing to bring his career total to 1,704 and passing Williams’ 1,702. While the guard was elated about the accomplishment, he was dismayed he couldn’t bring his teammates a win in the effort.

“Of course it’s a blessing but I’m a guy that likes winning and hates losing,” Longino, who finished with 27 points, said. “This was a game we prepared for, we split two games with them this season so this was our tiebreaker and falling short, it’s tough to settle with.”

Longino was outstanding in the first half, netting 21 points at the break while junior Casey Traina didn’t miss in the opening two quarters as the duo combined for 34 of the Patriots’ 36 points. That trend would continue right up to the point where Malvern Prep took off as GA’s supporting cast couldn’t get going.

The Friars however, had no problem getting everyone involved as the top seven guys in their rotation Tuesday all scored at least five points.

“It makes things 100 times easier, when everyone is involved, that’s when we’re at our best,” Oschell, who put in 11 points, said. “Tonight was a great example of that. We had a lot of guys step in and make big shots for us, so it’s always more fun when everybody is making shots and involved.”

SJ Hutchinson led the Friars with 20 points, Hicks was terrific in an 18-point effort and Andrew Phillips rounded out the double-digit scorers with 10 points off the bench. Phillips and Joey Vandergeest combined to shoot 4-of-6 from 3-point range as reserves and combined for 18 points while GA got just six points from its reserves.

Hicks didn’t hit a three, but he was able to be consistent on offense and scored at least four points in every frame. As a team, Malvern Prep went 10-of-15 from the floor in the third and two of those misses turned into put-back baskets.

“When we’re pushing it, guys are getting to spots and there are open shots, the whole team is unselfish,” Hicks said. “Nobody cares, if somebody is open, we’re getting to them and they’re shooting with confidence. If shots are going in, it just trickles down.”

A three by Traina cut the lead to 44-40 with 5:57 left in the quarter and that was as close as GA would get the rest of the way. Free throws by Brock Dudek and Oschell extended the lead to eight, Phillips and Vandergeest answered a pair of hoops by Jake Hsu with 3-pointers and once Hsu cut it to 56-46, Malvern Prep went off.

“I looked up and was surprised at how big the lead got,” Oschell said. “We really locked in defensively. We score, that’s what we do well so the key for us is always defensively. When we go on runs defensively like that, we tend to pull away.”

Aiding the Friars’ cause was their defense, which held Longino scoreless on just one shot attempt in the quarter with Hicks doing a lot of the work.

“We just wanted to make things hard for him,” Hicks said. “In the first half, he had a lot of open opportunities and pull-up jump shots so coming out in the third, I wanted to get under him, make him make more dribble-moves and keep from his spots.”

Patriots coach Matt Dolan credited Hicks for his ability to get into the lane and find shooters as well as the Friars’ efforts on the glass.

“Give the credit to them, they made their shots and it was just one of those night,” Dolan said.

Both teams are coming down the final stretch of their short season. GA will visit the Haverford School on Thursday before hosting Springside Chestnut Hill Friday and finishing with a home game against Penn Charter on Saturday. Before the Fords meet GA, they will host the Friars on Wednesday.

“It’s great for us especially because we’re only playing eight games this season,” Hicks said. “We started with a loss but we won the series with them, now we’re focused on going to Haverford and winning our series with them.”