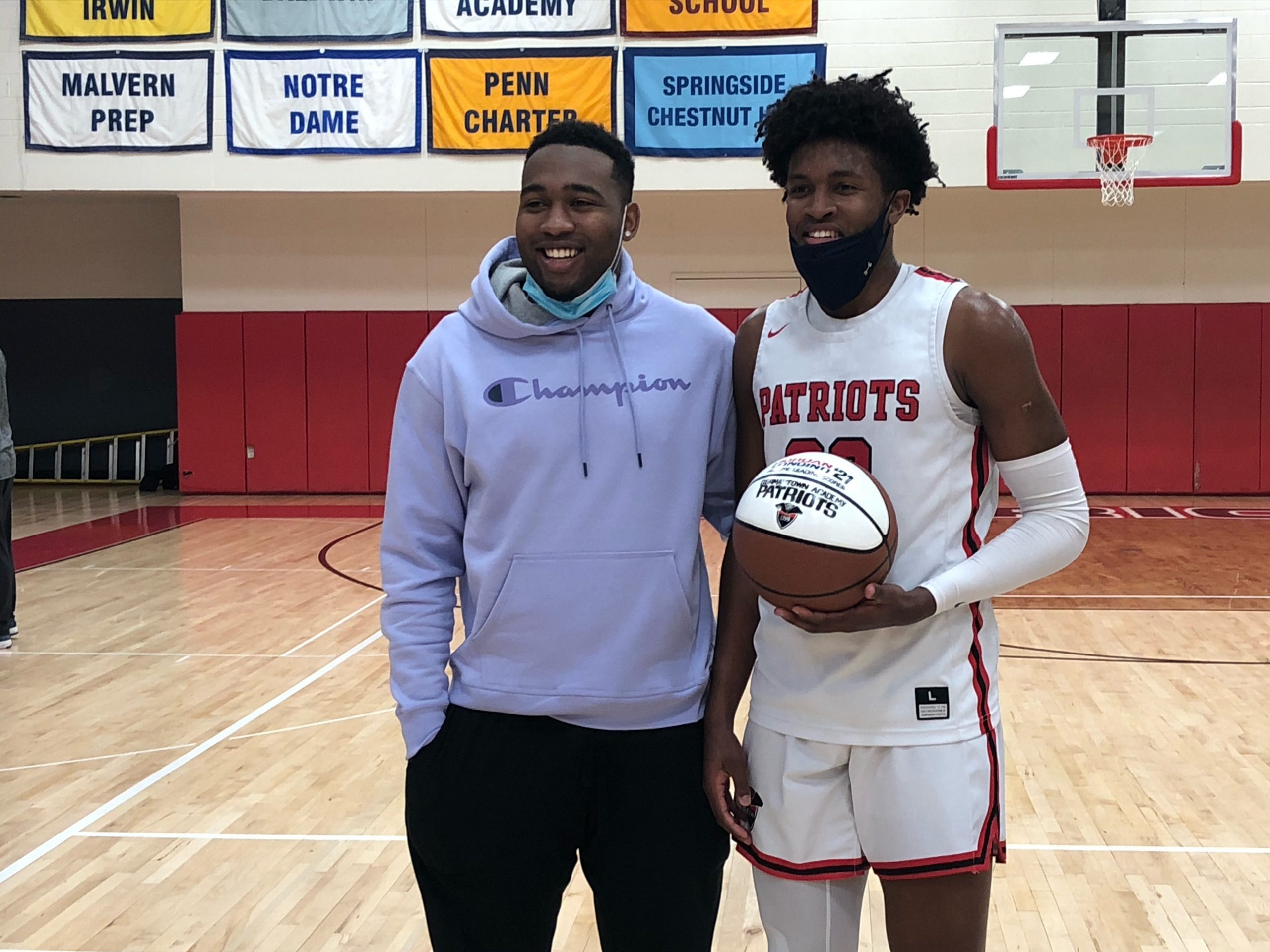 WHITEMARSH >> Jordan Longino wasn’t going to force his way to the top.

Needing just 10 points to ascend to the top of the Germantown Academy boys basketball all-time scoring chart, the senior didn’t come out looking to get his shots up quickly in Tuesday’s game against Malvern Prep. It’s not his style and Longino knew it wouldn’t feel right trying to get his, so he let it come naturally.

It didn’t take long as a 3-pointer in the final minute of the first quarter put the senior all alone as the top scorer in the storied program’s history.

“It’s really just a blessing,” Longino said after scoring 27 points Tuesday. “It’s a lot of thanks to my coaches, my teammates, my family and my brother who helped me to get here. All the thanks and all the love go to them.”

Longino, the 2019-20 PA Sportswriters Class 4A Player of the Year, passed GA great Alvin Williams for the No. 1 spot a week after he passed older brother Evan-Eric to take over second place on the career list. Evan-Eric Longino, currently playing at Kutztown, presented his little brother with a basketball commemorating the milestone during a timeout following Jordan’s milestone bucket.

Jordan has often cited his brother as one of his best mentors and inspirations. While they never got a chance to share the court together at Germantown Academy, the brothers have left a long-lasting legacy with the Patriots. “I was sitting in the stands with my father, we’re looking at him running up and down the floor and I still think of him when he was in eighth grade and I was a senior here,” Evan-Eric Longino said. “Time has flown by so much and I’m so proud of him. I was second in the standings and now I’m third, I wish I could have held it a couple more years but he came in and wasted no time.”

Taking over for his brother and Kyle McCloskey, Jordan Longino was looked at as a focal point from his first game under longtime coach Jim Fenerty who stated early on he had high expectations for the 6-foot-4 guard. Fenerty was among the small group in attendance Tuesday.

It was unfortunate that due to COVID-19, the gym at GA couldn’t be filled with fans and students to recognize the moment, but at least Longino had an opportunity to play this year and pursue that top spot. Williams, who also went on to play at Villanova before making a career in the NBA, and Longino have talked over the years and the former top scorer had some advice as Longino closed in on his record.

“I texted with him a little bit and he just told me not to put any added pressure on myself,” Longino said. “I finally got some bragging rights on him but he’s a guy that had such a high prestige as a player and a person. He’s someone I look up to as a mentor. He’s coached me since I was eight years old so being in the same conversation as him is a blessing.”

When Matt Dolan took over as head coach prior to last year, he knew he had an extremely talented player in Longino but learned this was a star-level player without a star-level ego.

“It’s the type of person he is, he’s an incredible human being, cares about others and works his rear end off,” Dolan said. “He’s always in the gym morning and night, there’s no surprise why he’s so skilled and so good, it’s because he puts in the work. Those have been the most impressive traits that I’ve come to know.”

Evan-Eric Longino said it’s a credit to their parents for instilling the work ethic in both he and his brother that made them want to come in early and work at 6 a.m. in the school gym and stay late day after day. He never had to push Jordan to want to work and knew his younger brother was primed for big things once he got his chance to play for the varsity program.

“Any time I went to the gym in high school, he was right there with me,” Evan-Eric said. “When I was a junior or senior and he was in sixth, seventh grade, we’d play one-on-one. Back then, I’d always win but now, the games really even out. I think him being willing to do those things and have me push him helped make him into the player he is now and what he will be once he continues into college and hopefully beyond.”

Longino didn’t get his first points until 3:38 remained in the first quarter but he didn’t take long to get going after that. The future Villanova Wildcat drew an and-one on his first score, hit a three off a Jake Hsu assist and connected on a pair of foul shots to give himself eight heading into the final minute of the quarter.

The senior grabbed a rebound and pushed the ball up the left side of the floor. Picking up speed, he slammed on the brakes a step behind the 3-point line, leaving a pursuing defender unable to stop and gifting Longino an open look.

His shot hit all net, pushing him past Williams and into first place.

“You always kind of dream of moments like that,” Longino said.

A player doesn’t get to that type of milestone by being one-dimensional. Longino’s offensive game has grown and he’s adding a post game to his repertoire this year to go with the long-range shooting and strong drives to the rim. Germantown Academy’s Jordan Longino passes the ball to a teammate during warmups before the Patriots’ game against Malvern Prep on Tuesday, Feb. 23, 2021. (Andrew Robinson/MediaNews Group)

Dolan said he’s most impressed with the way Longino has stepped up on defense and wants to guard the opposing team’s best player every night. The GA coach thinks that competitive drive along his size and frame will make him a versatile player for Jay Wright’s program on the Main Line.

Longino finished with 27, right around his season average of 25, on Tuesday but the Patriots lost to a hot-shooting Malvern Prep team. The senior said he was more worried about that right after the game and wanted to finish strong with his team in the last three games they have scheduled.

At some point, Jordan Longino will be able to reflect on his accomplishment, but he’s well aware of all the people standing behind him who pushed him to the top.

“I always had high hopes and goals set for myself but I just wanted to trust my preparation,” Longino said. “My teammates, my brother, my dad, they were always willing to work out with me. I had the early-morning workouts with Coach Dolan and Coach Fenerty. I had a goal set and I finally achieved it, it’s a blessing but I have to thank all the people that were there for me.”