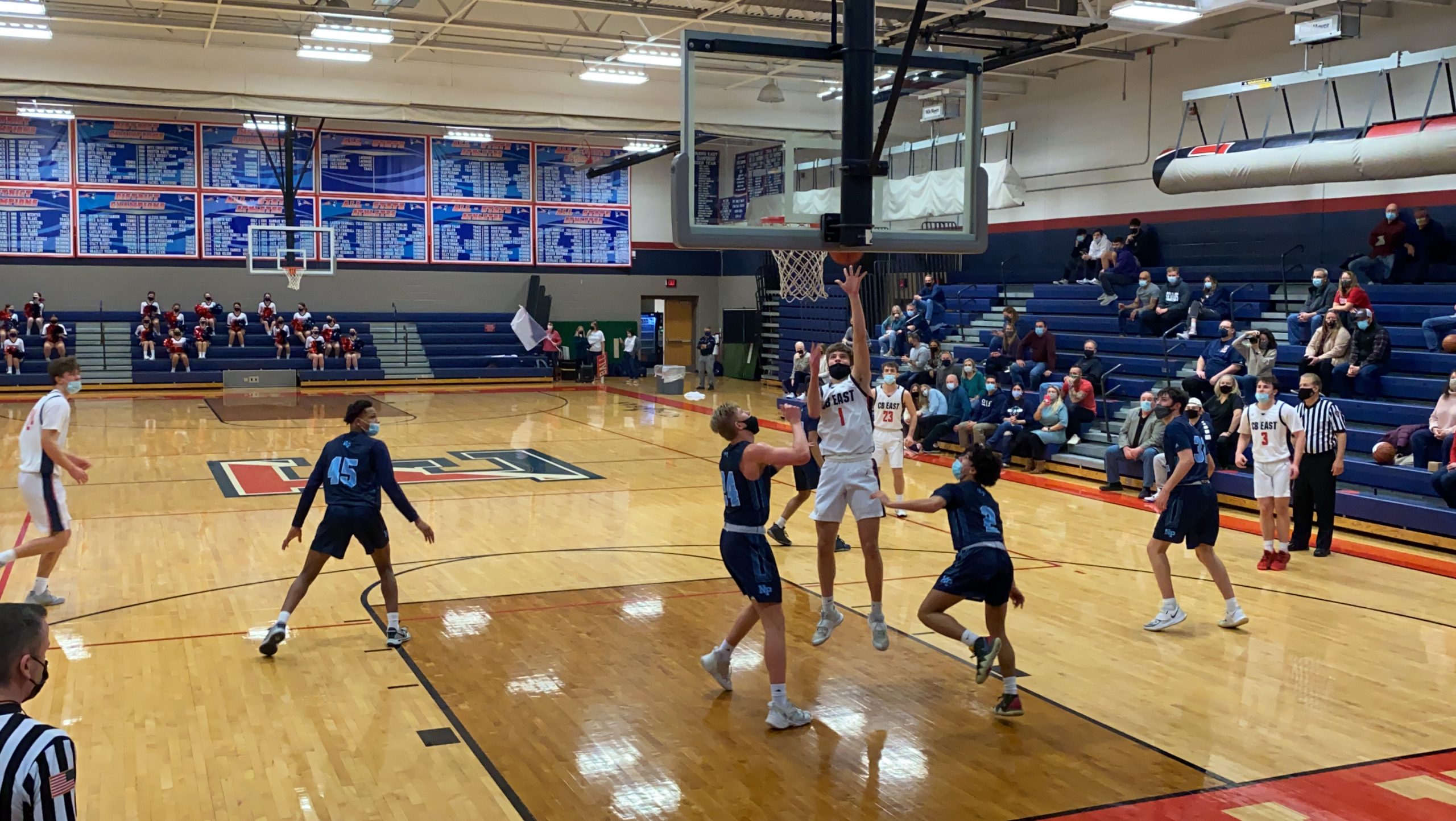 BUCKINGHAM >> Joe Jackman and the Central Bucks East boys basketball team were getting tired of being on wrong end of recent score lines against North Penn.

“We lost to them before states and that was bad,” Jackman said. “And then we had an undefeated season and we went into their gym, we thought we could of won but we blew it at the end. But we knew if we came in focused tonight, we could beat them by a decent amount.”

A buzzer-beater in their District 1-6A ninth-place semifinal last year gave the Knights a PIAA berth and ended East’s season. This January, North Penn handed the Patriots their first loss in an overtime battle.

Tuesday night, CB East finally figured out how to get the better of the Knights.

Jackman and Jack Hamilton combined for 30 points and the Patriots pulled away with a 15-4 run to finish the third quarter as they held off North Penn in the second half and earned a 57-46 SOL Colonial Division victory on Senior Night.

“It’s about time at this point,” Hamilton said. “But it felt good, we played well tonight. Good game.”

East led 30-20 at halftime before North Penn (10-5, 6-4) scored the first five points of the third quarter. The Patriots, however, answered with a 7-0 run to go up a dozen and proceeded to push its advantage to 45-29 entering the fourth.

Josh Jones posted a game-high 23 points – including an emphatic dunk over an East defender in the fourth – but after the senior knocked down three 3-pointers in scoring 13 in the first half the Patriots limited him to just two in the third.

“They key was to at least hold Josh Jones,” Hamilton said. “He usually has a good 25 on us, but today he might have had 25 but it was tougher for him. We really took his drive to the lane and the fast breaking away so that was good.”

Billy Coley added 13 points for North Penn, which a two-game win streak stopped. The Knights are scheduled to complete their regular season on the road against Upper Dublin 7 p.m. Monday.

“They defended well but I just think we didn’t play within ourselves,” Conrad said. “We just didn’t execute a lot of the stuff that we worked on.”

The loss Tuesday puts North Penn 10th in the District 1-6A power rankings with would have the Knights starting the 20-team tournament on the road in the second round.

“Like we’ve been talking about all year, we’re trying to get better every day,” Conrad said. “Obviously I’d like to win that last game. Our goal is we’d like to secure a home playoff game. Wherever we fall, we’d like to be home for the first one.”

CB East, meanwhile, sits in first in the district rankings after its fourth straight win. The Patriots are trying to regain their stride after a three-week break due to a COVID-19 pause and the snowy weather. East beat Upper Dublin 62-60 Jan. 30 and did not play another game until last Saturday when it bested Bensalem in OT 65-58.

“It was tough,” Hamilton said. “We weren’t sure if we had to quarantine or what, so a couple guys stop going to even like the Y and stuff. But it was a tough we had to find our rhythm back in the Bensalem game. It was kind of a rough game for us. We had like 17 turnovers but we’re starting to come back into rhythm here.”

CB East, which claimed at least a share of an SOL conference/division title for the first time since 2013-14 when it was part of a four-way split of the Continental Conference crown, finishes its regular season with stretch of five games in six days beginning at Neshaminy 6 p.m. Thursday.

“We got one practice to prepare us for the weekend,” Jackman said. “We know we can play back-to-backs. We’re ready for anything. So as long as just stay there mentally we’ll be good.”

North Penn’s Ryan Zeltt opened scoring in the third with a three while a Coley jumper had the Knights down 30-25. But a Shane Kennedy trey then baskets from Hamilton and Jackman put East up 37-25.

Two Coley free throws at 3:55 made it 37-27 only for the Patriots to post the next six points, the last four from Hamilton – his runner in the lane dropping for a 43-27 lead.

“Lot of open layups, lot of dump downs, nothing too difficult except for a couple layups,” Hamilton said. “Still trying to find a shot from the 3-point line but getting better.”

Jones scored off a spin move to pull NP within 43-29 before Brendan Harte’s drive from the right wing had East up 16 at the end of the third.

A Tehran Wright three-point play off a basket inside at 6:15 followed by Coley’s two free throws 10 seconds later had the Knights down 47-36. But Cummiskey converted a drive while a two from Harte pushed the Patriots’ lead to 15.

“I think tonight we felt more prepared for this game,” Jackman said. “We knew Bensalem could have been a toss-up and we were just glad to get out there with a win. So North Penn’s a great team and we know if we want to win this league we had to win this game tonight.”

Coley’s baseline jumper then Jones’ dunk over a defender that drew a foul with 4:28 left had North Penn again down 11 at 51-40. East, however, responded with baskets from Jackman and Cummiskey, returning the margin back to 15.

The Knights got off a quick start in the first quarter – Jones scoring six points as the visitors took an early 9-2 lead But the Patriots collected 13 the quarter’s last 18 points and ended the period up 15-14 after Cummiskey scored and was fouled on a drive at 1:10.

A 6-0 East burst had the home side up 26-17 after a Cummiskey basket. Jones knocked down a three off an inbounds but Hamilton scored off a drive down the lane and was fouled at 1:44. A Cummiskey layup in transition gave the Patriots a 30-20 lead at halftime.