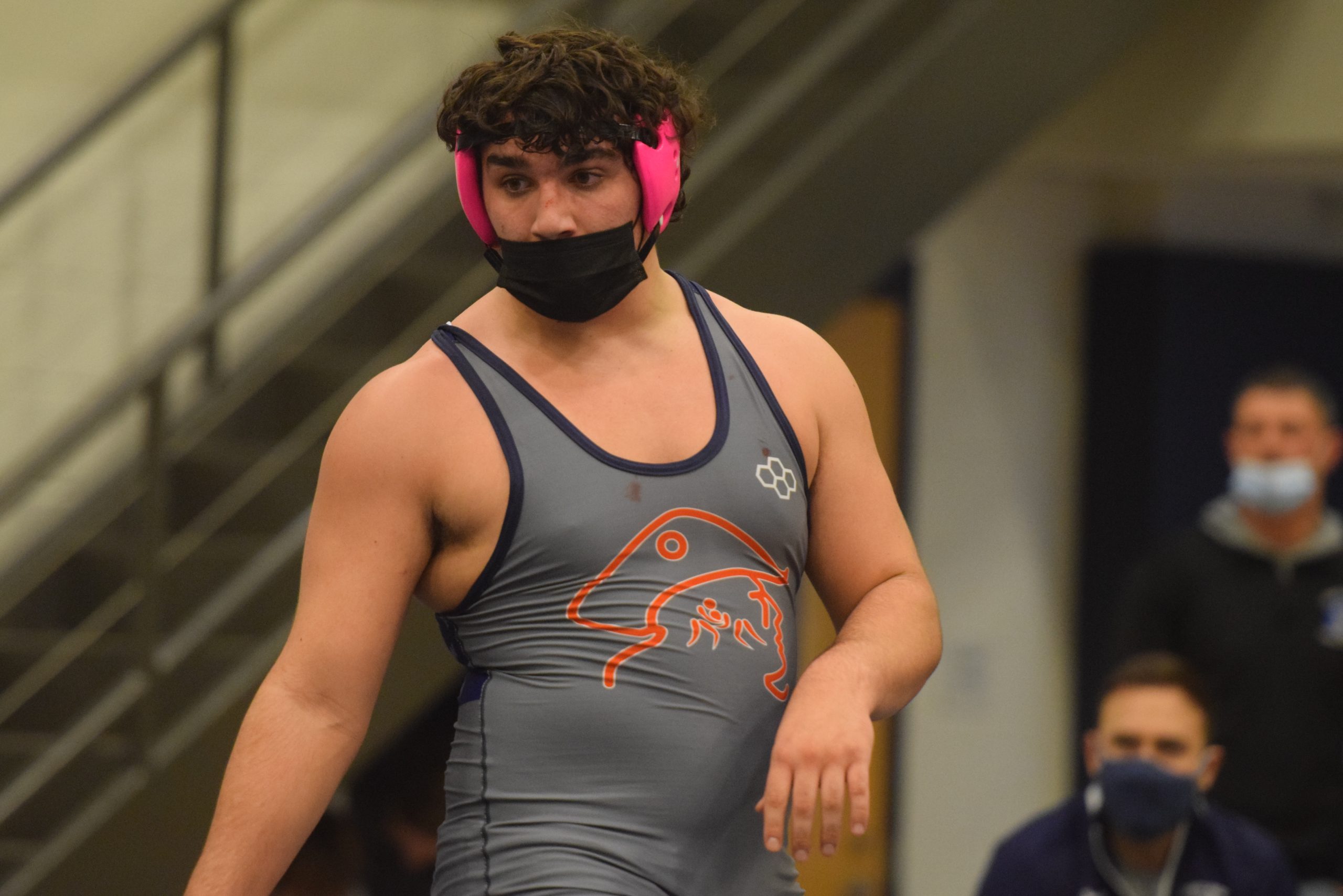 QUAKERTOWN >> Mike Miller didn’t leave the District 1-3A North Tournament with a gold medal. But the Plymouth Whitemarsh junior did leave with some extra motivation.

“A loss is almost sometimes good I think,” Miller said. “I lost my match. I’m going to work off that, I’m going to learn off my mistakes there. So yeah, I use that as fuel, momentum, anger for my next match out there. Next time on the mat, I bet I put on a show, so mark my word on that.”

After pinning his first two opponents at 285 pounds Saturday, Miller’s bid for a second-straight district title was thwarted by Council Rock North’s Max Harar in the weight’s championship match. Harar broke a 1-1 tie with a takedown in the third period and held on to edge Miller 3-2.

“I left my feet on a double leg that I should of just kept running my feet on the mat,” Miller said. “Instead I kind of leaped, like put myself vertical, like a 90-degree angle and flopped straight to the mat and that what made him cause that takedown on me. If I don’t jump off my feet like that, I think there’s a good chance I hit my double leg there but just keep working.”

Miller was one of seven area wrestlers to claim second place in the respective classes and was among 17 locals to move on to next week’s South East 3A Regional.

“I thought I had a good day but definitely wasn’t what I was aiming for,” Miller said. “I definitely walked into this tournament hoping to get first place, not second place. I mean, yeah, I did my job, my first two matches I expected to do that but expected to do my job my third match too and I didn’t.”

Plymouth Whitemarsh had four wrestlers advance while North Penn, Pennridge and Abington each had three qualify for regionals, which is set for Saturday at both Council Rock North and Council Rock South.

CR South claimed the team title with 115 points while host Quakertown was second at 111 points.

Galang’s silver is his best distract performance, opening the tournament with two 15-0 technical falls – the second in the semifinals against Central Bucks West’s Chris Cleland, who beat Galang 4-3 a week prior in the SOL Colonial Championships final.

“It means a lot,” Galang said. “Go to regionals, have a chance to quality for super regionals that’s why I’ve been working for the past three years and unfortunately last three years I’ve haven’t been able to do that. Last year and freshman year I didn’t perform as well and then second, my sophomore year I was in a stacked bracket, it was hard to get out so it’s nice to finally get out of districts this year.”

In the district 132 final, Galang lost to Perkiomen Valley’s Kelly Kakos by a 9-0 major decision.

“I didn’t really get to my offense,” Galang said. “Caught me on my feet and then just rode me out with his legs and tough to reverse him.”

Morrow came up a win short of a second straight district title. In a matchup of state qualifiers from last season, Bensalem’s Connor Eck built a 4-1 lead after the first period then held off Morrow to take the 145 final 8-5.

North Penn also got a third-place finish from Michael Cliver, who won the 120 consolation final by forfeit over Plymouth Whitemarsh’s Ashton Wittenberg.

Joining Miller and Wittenberg in reaching regionals for PW were senior Jake Bainbridge and junior Jake Williams. Bainbridge placed third in 189 with a 6-4 decision over CR North’s Blake Silber while Williams earned fourth at 106.

Pennridge’s freshman duo of Cole Coffin and Sam Kuhns both claimed silver. Coffin dropped a 3-1 decision to CR South’s Cavan Kinne in the 106 final while Kuhns was handed is first defeat in the 113 final, losing a 5-0 decision to Quakertown’s Mason Ziegler. Fellow Rams freshman Ryan Gallagher took fourth at 152.

Abington, which had just one dual meet in January before COVID-19 canceled the rest of Galloping Ghosts’ schedule, was paced by sophomore Matthew McCaughey taking second place at 126.

“I figured we would but I wasn’t really sure,” said McCaughey of Abington competing at districts. “I didn’t know it was going to happen but I was just trying to stay active, keep in shape.”

McCaughey picked up two decisions to reach the final but was denied a second district title by Quakertown’s Zach Borzio, who pinned McCaughey in 3:12.

“I feel I did good,” McCaughey said. “I’m a little light on weight so I feel like that’s a factor but can’t put it on anything, I didn’t win.”

Ghosts junior Shane Kibler came in third at 152 after a 3-2 decision over the Gallagher. Senior Nicholas Castorina earned fourth for Abington at 152.

Central Bucks West had two advance to regionals led by junior Carl DiGiorgio, who placed second at 215 after losing 10-8 to Central Bucks East’s Quinn Collins. It was the third match in 2021 between the CB rivals with Collins now up 2-1 on the season series.

Cleland claimed bronze at 132 for the Bucks, bouncing back from the tech fall loss to Galang to pin Lower Merion’s Judea Williams in 21 seconds in the consolation semis then bested Luke Wilson of CB East 4-0 in the third-place match.

Imhotep Charter gives Plymouth Whitemarsh a look in mirror
Smith, Ortlip push each other, Spring-Ford to team title at District 1-3A South tournament