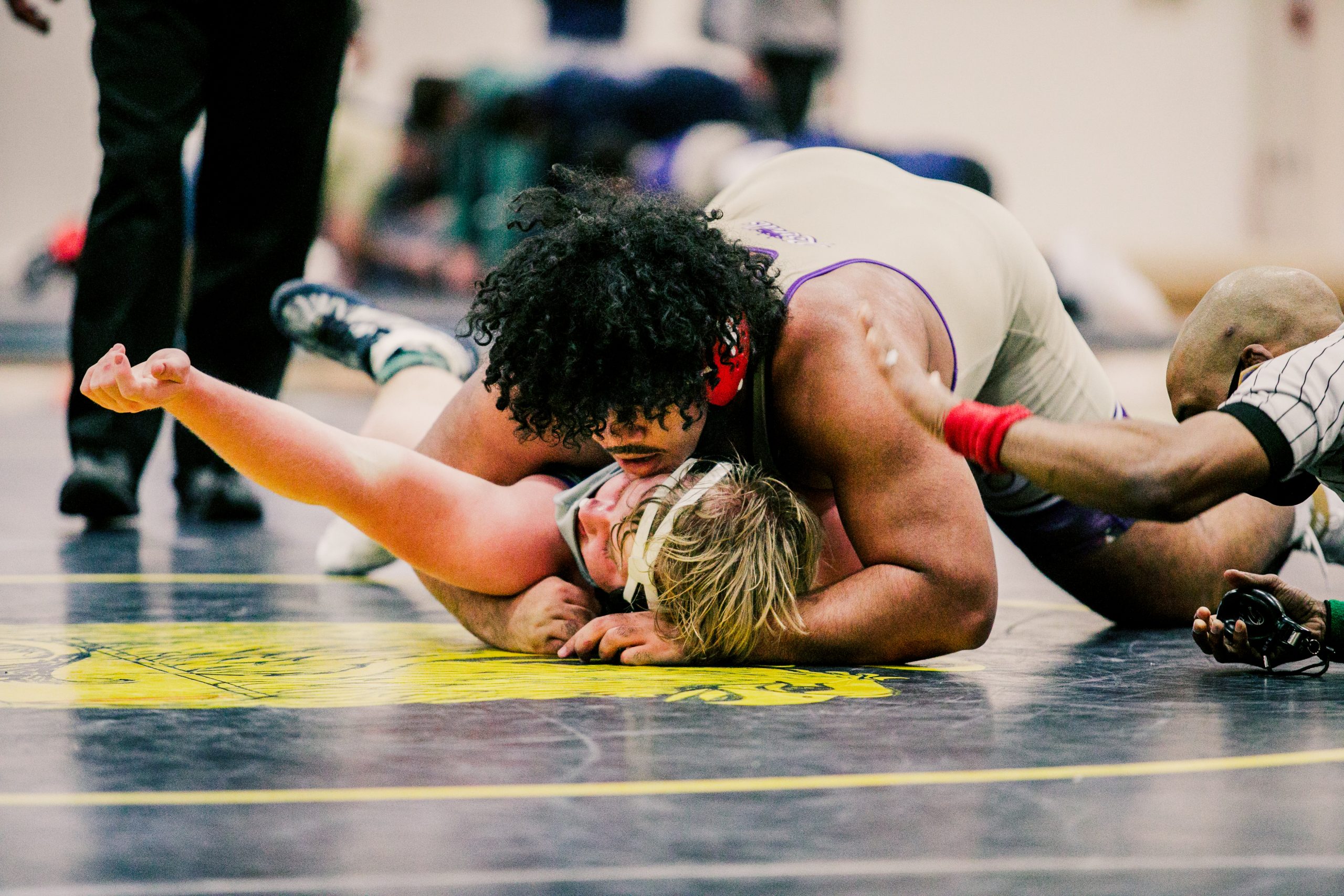 ASTON — Once you got used to the facemasks, the District 1-South Class 3A wrestling tournament at Sun Valley was almost like old times.

Twenty Delaware County competitors qualified for regionals next weekend, with Ryan Catka of Sun Valley, Chase Barlow of Strath Haven and Julien Laventure of Upper Darby winning gold on a Saturday that would have been brighter only without a pandemic limiting the competition to coaches, wrestlers and officials.

Few wrestlers have improved their craft from the last district tournament to this one as much as 285-pounder Laventure, the late bloomer whose footwork used to hamper his takedowns. “We just worked on changing his stance,” Augustine said. “He had a real defensive stance. We worked on moving that back foot just a little farther back and changing it to a more of a vertical angle than wide, where he can actually shoot instead of his feet getting in the way of shooting. He needed a little more depth in his stance. Once he changed that, everything started clicking. He’s a different man this year.”

A junior, Laventure is every bit as big as the kid who battled within two victories of a state medal last year. But more muscular and polished, he’s also become a fan of the sport. There’s nothing like watching wrestling videos of college stars Gable Steveson, Mason Paris and Anthony Cassar, whose antics range from back flips and freight train double-leg takedowns to bearhugs and scissors-step shuffles. For now, there is no plan to teach Laventure the back flip.

“I was way more of a defensive guy last year,” Laventure said. “I didn’t attack. I wasn’t confident in myself. But working with the coaches, Pete and all the coaches, they’ve helped me so much. We’ve been pushing it for months. I go head-to-head with Pete and my dad has helped me work at home. That last match tonight I definitely could have wrestled a lot better. But we’re going to go back in that room and work some more.”

Laventure won by fall in the championship bout over Matt Micale of Downingtown West. Laventure had a 5-2 lead over his quicker rival.

Barlow, at 152 pounds, wrestled one of the most entertaining matches in the finals, avenging a loss last year to Zach Needles of Spring-Ford with a 5-2 decision. It was a laser-fast takedown late in the first period that Barlow didn’t score on that gave him a decisive lift.

“A few more seconds and we would have gotten it,” Barlow said of the two points for the move. “That boosted my confidence. I knew I could take him down when I needed to. He beat me last year, I think 7-5. So, I knew he was going to be tough. I just stuck to what I was doing. I kept to my style and it worked out.”

Barlow held a 2-1 lead at the end of the first period. Catka, at 215 pounds, blended speed, power and a bag of moves into his pin of Jake Allred of Conestoga.

Catka held a 15-3 lead before ending it. When he wrestles, bodies spin and fly around the mat almost rhythmically.

“I’m not a fan of those 2-1 matches,” said Catka, who won bronze at states last year. “I like to keep the pace moving and try to get into my attacks and everything as fast as I can. I kind of try to think of combinations when I’m out there. I kind of feel like I’m not that far along where it’s just like second nature. That’s what practices are for. I’m just trying to get those habits down. I think I’m close. And I know I’m going to be hitting at that next level at Navy.”

Ricci battled back from a 3-0 deficit to win in overtime, completing his quest to reach regions after coming within one victory of the medal stand the past two years.

Hollingsworth lost his first match of the season in the final, a technical fall to Nathan Lucier of Coatesville.

“I wrestled him my freshman year, and this past summer we’ve been wrestling partners,” Hollingsworth said. “You can’t get behind him. I think it was a pretty solid day for all of us. We’ve got some things we’ve got to fix. We’ve got a week to get prepared and keep pushing forward.”

Strath Haven was seventh in the team standings, co-captain Kelton Brunner finishing third at 132 pounds. Gabe Federico (189) and Ben Farabaugh (285) were fourth in their weight classes.

For Haverford, 11th in the team competition, Cole McFarland reached the final before finishing second at 106 while Stephen Lozano was fourth at 160 pounds.

The regions are next weekend at Council Rock North and Council Rock South. The tentative plan is for one school to host bouts from 106 to 145 pounds and the other from 152-285.

That won’t make it easy on the coaches who like to be there for players in some shape or form. But for wrestlers who want to keep on wrestling, it’s a small price to pay.