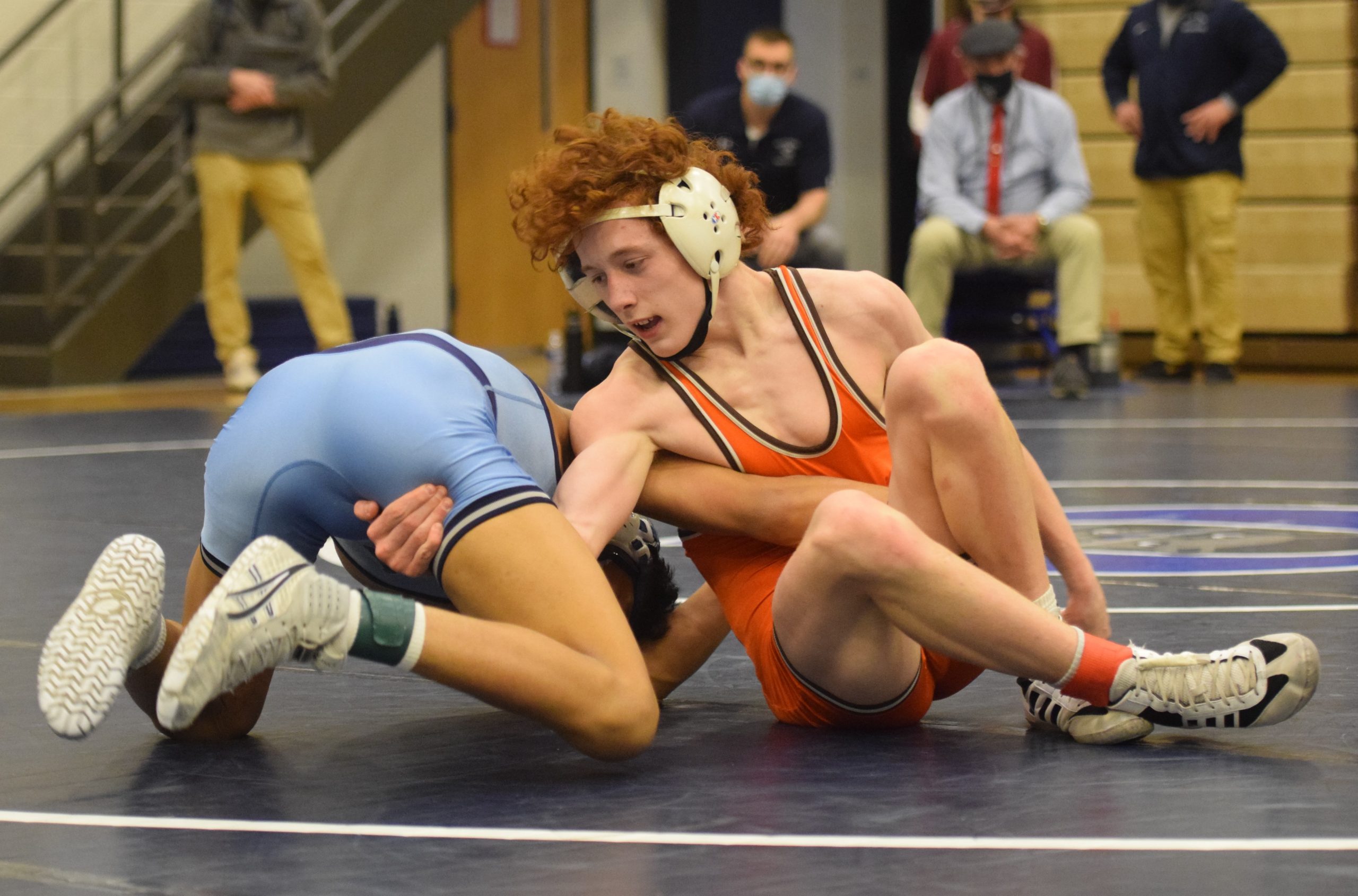 QUAKERTOWN >> He’s not used to punching his ticket for a medal-round match so early in the day.

But that’s not to say Kelly Kakos isn’t any kind of “morning person.”  That was far from the case Saturday at the District 1-AAA North Tournament.

Kakos put himself in position to defend his 2020  District 1 championship finish well before lunchtime. The Perkiomen Valley sophomore breezed through his quarterfinal- and semifinal-round bouts, dispatching Council Rock South’s Andrew Lindros in the third period before posting a technical fall on Bensalem’s Christian Martinez.

With those tasks completed by midmorning, Kakos had a good seven hours before facing North Penn’s Eddie Galang in the championship round around 7 p.m. And he had his free time mapped out with constructive activities.

Kakos (12-0) stayed as strong in the evening hours, too. He blanked Galang, 9-0, to complete his sweep of the day’s mat action.

Off a 2-0 lead after one period, Kakos reversed off a bottom start in the second to go up 4-0. In the third, another reversal and three back points sewed up his second district title.

“I couldn’t do anything. He was on top,” Kakos said of the stalling warning he received while working to get free of Galang. “I knew I would be able to get out, so I waited for him to get high.” Kelly also admitted the atmosphere in the Quakertown gym (no fans) was more to his liking.

“I was way less nervous this time,” he said. “I like it with less people … less stress, easier on you.”

Kakos earned his break time during the afternoon with dominant early matches. He got the slap on Lindros at the 3:11 mark, then rang up a 20-3 lead on Martinez with little more than a minute left in their semi.

“I stuck with the same things … takedowns right to back, put up as many points as possible,” he said of his strategy. The pairing with Galang (12-1), who tech-falled his way through the early bouts, was somewhat unexpected for him.

“I was planning on (CB West’s Chris Cleland), but Galang came out and wrestled,” Kelly added. “I watched him a couple times. I have to defend his shots, work my basic offense … don’t let him get his basic stuff.”

His head coach is confident Kakos is up to the post-season task, getting to the finals at next weekend’s South East AAA Regional tournament. That site has been moved from Oxford to the Council Rock high schools.

“Kelly’s worked hard all year,” Dave Thomas noted. “He’s upped the tempo at practice, been good on his feet.”

Kakos was joined in the championship bracket by teammate Grant Euker, who won twice at 189.

In his final with Council Rock South’s Anthony Cerulli, the PV sophomore (11-1) scored five points in the first period before adding two more in the second. The initial lead gave him the confidence boost necessary to get the job done.

“After the first, I knew it was my match,” he said. “I definitely had a better attitude and mindset

“The first period, I had a nice shot I didn’t finish,” Grant recalled. “I knew I could do it again, faking left then going right. I did it three times and got two of them.”

Euker’s first win of the day came when Upper Moreland’s Nasir Thomas forfeited their bout, his second was a 3-0 decision of Plymouth-Whitemarsh’s Jake Bainbridge.

“It wasn’t a good match,” Euker said of his semifinal. “I knew I could ride on top, so I saved my energy for the bottom.” Euker nonetheless was satisfied with the way things went for him, in light of the fact he and his PV teammates hadn’t practiced together since Wednesday due to inclement weather.

“It was a way to knock off the rust,” he said. “I worked out on a treadmill, but that’s not the same as working in the (practice) room. I was still pretty confident I would win this one.”

The Pioneer Athletic Conference contingent had six other grapplers who, having already qualified for the regional by virtue of winning their consolation-semifinal bouts, were vying for third-place medals. Three of them won their consi-finals: Phoenixville’s Owen Koch (172), Pottsgrove’s Manny Allen (285) and Upper Merion’s Ayden Cheng. Koch (11-2) edged Abington’s Nicholas Castorina 3-2 to cap his 3-1 day. The Phantom junior controlled a second period that saw all the bout’s scoring take place, escaping from a bottom start and scoring a takedown while Castorina mustered only a takedown of his own.

“This was the third time I wrestled him,” Koch recalled. “The first time I beat him very good, the second time he won by one point. So I started to get revenge there.”

Allen (7-1) was extended to overtime by Quakertown’s Frederick Retter before scoring a 7-2 decision. Cheng, in turn, rebounded from an opening-round loss to pin two of his three subsequent opponents, capped by a 2:43 drop of Upper Perkiomen’s Joey Carpenter.

NOTES >> Perk Valley came out of the day’s action as the PAC’s team leader. The Vikings were fourth among the competing schools with 51.5 points. Council Rock South was first with 115 points, edging host Quakertown (111). … Next weekend’s South East AAA Regional tournament will be co-hosted by Council Rock North and South high schools. It’s a change of venue from the original site of Oxford. The individual champions of the District 1-3A North tournament pose for a winner’s photo at Quakertown. (Austin Hertzog – MediaNews Group)