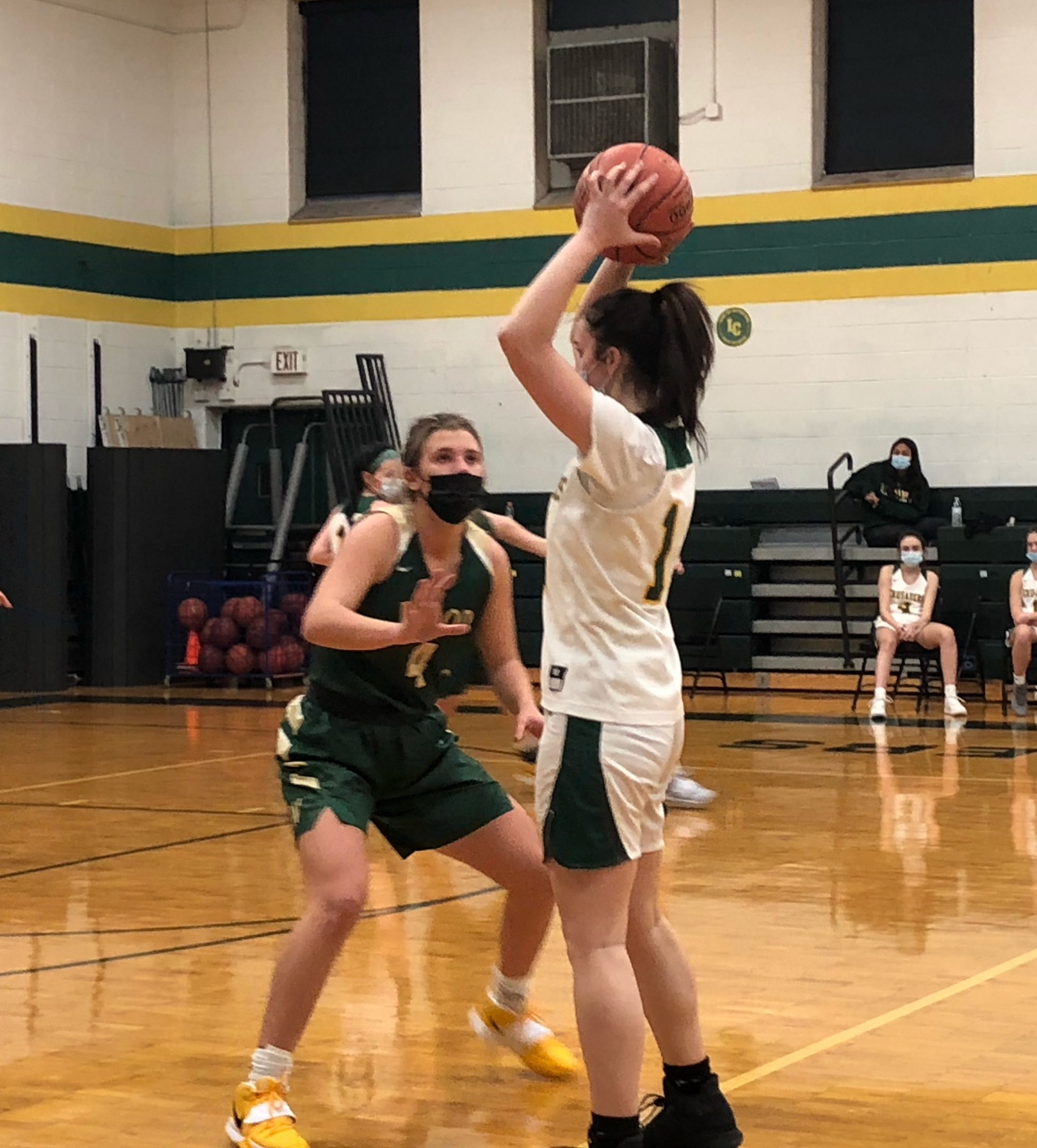 LANSDALE >> Archbishop Wood wants to start games the way it has been finishing them.

The Vikings came out slow in Friday night’s visit to Lansdale Catholic, a theme that’s become a little too recurring this winter as they pursue PCL and PIAA titles. While Wood has been able to turn it on for the most part after halftime, the second half of the PCL girls basketball Red Division doesn’t leave much room for error.

Friday, the Vikings found the right level after halftime and picked up a 77-47 win over the Crusaders that also had PIAA Class 4A implications.

“After (Tuesday’s loss at Cardinal O’Hara), we realized the importance of doing the little things all the time but in the first half, we just weren’t,” Vikings senior Kaitlyn Orihel said. “That was our big focus in the second half, stopping their two biggest threats, getting every rebound and doing all the little things that matter in big games.”

Orihel was a catalyst in the second half surge for Wood (5-1, 5-1 PCL Red), with the all-state guard recording four of her five steals in the third quarter while defensively she stuck to Crusaders (0-3, 0-3 PCL Red) sophomore Gabby Casey like a shadow. As a co-captain, Orihel said it’s on her and the other seniors to make sure their teammates are ready to go so they can get over the slow starts.

GIRLS BASKETBALL: @WoodGirlsBball @RyRyBuckets deflection leads to @kaitlynorihel steal and layup for 41-31 lead Q3 at Lansdale Catholic
Orihel had five of her six steals in the quarter pic.twitter.com/jmkxccPxBK

The Vikings also emphasized locking down on LC’s freshman sharpshooter Olivia Boccella, who had burned them for 14 points in the first half. A number of players took turns defensively, but sophomore Allie Fleming had a particularly strong spell in helping limit Boccella to just one point after halftime.

“I just tried to deny her, but if she did get the ball, I was trying to keep it out of her right hand and play up on her so she couldn’t shoot,” Fleming said.

“She plays with a ton of energy, she’s confident and works hard which pays off when she gets into games,” McDonald said. “It helps she can shoot it too. She’s been battling a bit of a leg injury but we have high expectations for her.”

Lansdale Catholic, which doesn’t have a JV team this winter and just 10 players on the varsity roster, played hard and hung around but Wood’s depth wore the hosts down over time. Despite the laser-focused defense on her, Casey powered her way to 19 points while securing 15 rebounds, three assists and six steals plus one emphatic block.

The Crusaders had a nice start to the game, taking a 15-10 lead on a Casey basket midway through the opening quarter. Their energy, combined with Wood’s flat start prompted Vikings coach Mike McDonald to send in a lineup of five reserves just a couple possessions into the contest.

“Other than the O’Hara game we just lost, typically we’ve done better in the second half and we need to find a way to light that fire before the game starts,” McDonald said. “We have to set a better tone. We were a little more disciplined in the second half; we still fouled a bit too much but when you go nine or 10 deep, you can sometimes get away with it.”

Boosted by five points in the quarter from Fleming, Wood took an 18-17 lead over LC after eight minutes. A Ryanne Allen-fueled run by the Vikings pushed the visitor lead from 26-24 to 35-24 in the span of a minute late in the second but the Crusaders scored five of the next six to keep it close at 36-29 going to the break.

Casey scored on LC’s first possession of the second half to pull within five, but Orihel got going the other way and gave her team the kick-start it was looking for. The Villanova recruit hit a three, turned a steal into a layup then assisted an Allen three following a drive by the junior forward to put the Vikings up 46-31 three minutes into the third quarter.

“Kaitlyn came out and set the tone for us,” Fleming said. “She got a few good stops and that really hyped us up and got us ready to finish the game.”

Although Wood had found the level of aggressive defense it was after, it wasn’t the cleanest effort and the Crusaders took advantage by getting into the bonus before the frame ended. A traditional three-point play by Lauren Edwards capped a mini-run that got the lead back to single-digits but Fleming responded with a three that kept the Vikings in front by double-figures the rest of the way.

A 7-0 Wood run capped by a Delaney Finnegan 3-pointer off a long outlet pass by Orihel beat the quarter horn and a 58-39 advantage.

“It starts with our leadership, we need to do better of finding that moment and getting everyone into game mode,” Orihel said. “We need to start doing it earlier in the second half. I’ll put that on me, I have to start setting the tone for the games more often.”

The Crusaders, who also had to navigate a two-week pause when they were ready to begin play, lost by just a point to defending PCL champion West Catholic in their opener and hung with Archbishop Carroll and Wood for stretches. With just of the team’s top three scorers from last season returning, LC will continue to keep building starting with Sunday’s trip to Neumann-Goretti.

With Allen, who led all scorers with 20 points, sitting with foul trouble, Orihel and Bri Bowen out-scored LC 9-1 to open the final quarter and back-to-back treys by Fleming at the midpoint all but sealed the result for Wood. Fleming and Allen each had four 3-pointers while the Vikings hit 12 as a team. “We started using our teammates and shots were falling, which is always a good thing,” Fleming said. “Kaitlyn had a few stops that led to transition baskets and it always starts on defense. When we get stops, the ball moves more.”

Wood is still in good position atop the Red Division standings and is 2-0 among the PCL’s 4A teams but Orihel cautioned the Vikings can’t keep relying on second half rallies as they head into the second half of their schedule. The Vikings visit Neumann-Goretti then host West Catholic next week with Friday’s home game against the Burrs their first meeting since the PCL championship last February.

“We’re just trying to fix team errors,” McDonald said. “Making shots or missing shots, that’s going to happen but we’re looking at the defensive things, being a little more disciplined and the major thing, setting a tone a little earlier.”