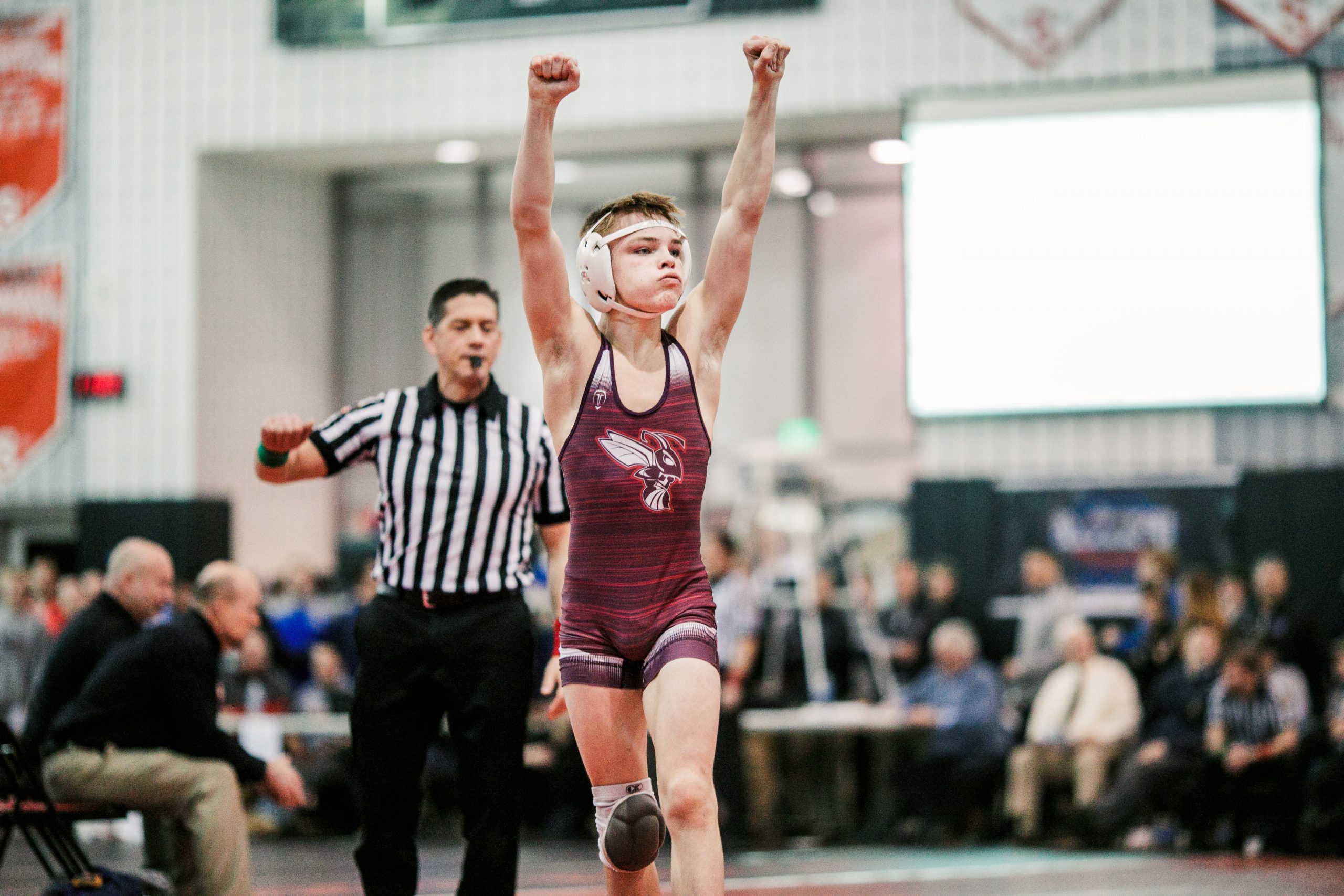 The year of COVID-19 has felt like a decade, but for the wrestlers at Oxford, it’s been more like an eternity.

“The kids have been great,” Oxford coach Ben Young said. “They’ve adapted almost better than I have. They’re up for whatever. If they can wrestle, they’re there.”

Finally, after every other team in the Ches-Mont League, and the majority in District 1 has already been doing, the Hornets can wrestle.

They will hit the ground running at the District 1-3A South tournament at Sun Valley High, starting at 9 a.m., Saturday.

Due to capacity restrictions and distancing protocols, District 1 was split in half for two tournaments made up of eight-man brackets that were voted on by the head coaches.

Oxford was the only team without any 2021 competitions to go off of, making an already-arduous task of voting on seeds even more challenging when considering the Hornets.

“It was more beneficial to have three matches than zero matches,” Young said. “I understand it was very difficult putting the seeding together, but it was rough on our kids. We had to fight tooth and nail to get recognized without having any points this year.” Four Hornets were selected. Cannon Hershey (120 pounds), a regional finalist and state qualifier as a sophomore, earned the No. 3 seed, while seniors Landon Meredith (152) and Cooper Johnson (160) leveraged their multiple regional qualifications for spots in the bracket. Sophomore Austin McMillan (132) was the surprise of the group, having no postseason experience to his name.

Reiland Canaday (113) and Jeremy McKinney (172) finished ninth and 10th in the voting, respectively.

With little time to prepare, there surely isn’t time to spend focusing on what can’t be changed. This is Young’s first season as head coach after taking over for the legendary Scott Gold. Young’s task of keeping his athletes prepared and focused, despite having the start of their season delayed week after week, has been a challenging one. In typical wrestling fashion, going hard toward the goal is really the only option.

“In a normal season we’d be tapering back with shorter practices, but keeping it intense,” Young said. “We don’t have that luxury this year. We’re having full practices, going full bore, trying to get them in the best condition we can and going over the basics to get them mentally ready.”

No fans are allowed at the venue, but the South tournament can be view on SFBNPPV.com.

Here’s a look at the 13 weight classes: This is potentially the weakest weight of the tournament for the Ches-Mont, with no bonafide star. Sun Valley’s Tim Kearney is the highest seed from the league, at No. 4, having gone 6-0 against league foes. He’ll start with Upper Darby senior, Farhan Chowdhury, who’s the only wrestler in the bracket who’s been to regionals. Spring-Ford sophomore, Cole Smith, is the top seed, and gets his first postseason action with West Chester Henderson’s Brien Wildermuth in the opener. A pair of freshmen who have been ranked in District 1 this year, Haverford’s Cole McFarland and Boyertown’s Gavin Sheridan, will battle on the lower half of the bracket. West Chester Rustin’s James Pizzi starts with Sheridan.

Spring-Ford holds the No. 1 seed again, with Dom Ortlip, a returning state qualifier. He seems to be the favorite up top, though Boyertown’s Luke Heimbach just dropped and could give Ortlip a go if he gets past Interboro’s Victor Quintiliana, first. On the bottom half, Henderson’s Carmen Cortese peaked last year in the postseason and hopes to repeat that. He starts with Owen J. Roberts freshman, Dysen Neil, and would get a Ches-Mont opponent in the semifinals. Sun Valley’s Xain Cabalo and Kennett’s Joey Wuchter are in the other quarterfinal, and Wuchter looks to make a name for himself. Wuchter has not seen a second period yet, winning by fall twice, accepting five forfeits and injury defaulting to Cortese in a match he led. This is arguably the toughest bracket in either of the District 1 tournaments, with a state medalist, No. 1 Jay Maldonado of Boyertown, and three state qualifiers, Downingtown East’s No. 2 Keanu Manuel, Oxford’s No. 3 Cannon Hershey and No. 4 Jimmy King of Rustin. King has a tough clash with Spring-Ford’s Quinn Smith, a regional qualifier, in the first round. Hershey’s first bout of the season is against Garnet Valley’s Matt Ricci, a fifth-place finisher at last year’s West Section. West Chester East’s Max Parnis finished fifth in that West, as well, but he gets Manuel, who like Maldonado, is looking for his fourth postseason title. Maldonado’s first bout is against OJR freshman, Sam Gautreau, who earned his way in with a win over Ortlip and Heimbach. This weight is so deep, a pair of regional qualifiers — Henderson’s Max Jackman and Radnor’s Zack Fluck — were not voted in. After Maldonado dropped to 120, this weight opened up for Downingtown West’s Dom Findora, who looks like the favorite in the region. He’s the top seed and expects to see either OJR’s Matt Englehardt or Ridley’s Rocco Hartfuss. Conestoga’s first competitor, Mitch Baker, is the No. 7 seed and gets a tough junior from Interboro, Nate Shippey. The other quarter on the bottom half is a rematch between Henderson’s Billy Wilson and Sun Valley’s Shane Holefelter. Wilson pinned Holefelter in the regular season in a match Holefelter was winning. Outside of Findora, there isn’t much star power here, yet, but with only one senior (Haverford’s Jack Lacianca), the group is looking to break out. The Ches-Mont’s best stretch is from 126-145, and one of its best resides here in Coatesville’s Nate Lucier, a sixth-place state medalist. He opens his tourney with Oxford’ sophomore, Austin McMillan, who is looking to establish himself in his first postseason. Lucier is the favorite at the weight and would see either OJR’s rising star, Mason Karkoska, or Ridley’s vet, Chris Green, in semis. There are a pair of returning state qualifiers on the bottom half, with No. 2 Griffin Hollingsworth of Garnet Valley and Downingtown East’s No. 3 Ryan Loraw. Hollingsworth is the pick for the finals, but Loraw would love to test him in the semis if he can avenge an opening-day loss to Henderson’s Brett Patton. Kennett has six wrestlers in this tourney, tied for second-most in the Ches-Mont, and Trent Kochersperger is the top dog and No. 1 seed, here. He and Ridley’s Kevin Rainey are the only seniors in a bracket with six juniors. Kochersperger begins with Sun Valley’s Dan Kearney and then would get either Daniel Husain of Garnet or Penncrest’s Nikko Partsanakis. Husain won that matchup, 5-0, earlier in the month. Henderson’s Palmer Delaney is the No. 3 seed and hopes to get past Rainey to set up a potential semifinal with Boyertown’s Chance Babb, a returning state qualifier who made the drop from 145. Henderson’s Sammy McMonagle is the class of this weight that isn’t overly deep. The seventh-place state medalist is the top seed and he’s on the West Chester side of the bracket, with West Chester East’s Andrew Luke and Rustin’s Charlie Baldesari vying to meet McMonagle in the semis. Luke owns an overtime win over Baldesari in the regular season. On the bottom half, which is all Delco, Garnet’s Chris Wood is the No. 2 seed draws Ridley’s David Rainey, while Interboro’s Dylan Lajudice and Strath Haven’s Charlie Dawes brawl it out. This figures to be one of the more-entertaining weights, with a couple state qualifiers, Strath Haven’s Chase Barlow and Interboro’s Dom D’Agostino, bookending the bracket as the top two seeds. Spring-Ford’s undefeated Zach Needles is a threat, as well, with a win over Barlow last season. Needles gets Chase Barlow’s second cousin, Josh Barlow of Kennett, in quarters. Oxford’s Landon Meredith opens his senior year with Haverford senior Don Reimer, and Conestoga sophomore, Hayden McLellan, tangles with D’Agostino. Sun Valley’s Alex Gamble-Williams is a strong No. 8 seed, and with Chase Barlow, D’Agostino and Needles favored to get out, the fight for the final spot appears to be very heated.

The top seed is held by Spring-Ford’s seventh-place state medalist, Jack McGill, and would get a Ches-Mont foe in semis. Oxford’s Cooper Johnson and Henderson’s Bobby English are the two seniors grappling for that opportunity. Downingtown East’s Bo Horvath is the No. 2 seed and will get tested by OJR senior, Cole Bechtel. The Ches-Mont could get all three out, but Haverford’s Stephen Lozano will have a say as the No. 3 seed, and Interboro’s Aidan McDevitt and Strath Haven’s Simon Bolinger aren’t easy outs, either. Everyone is chasing Downingtown East’s Matt Romanelli, who dominated his way through District 1 a year ago on his way to states. He starts his quest back with Kennett’s Darrale Barrett. In the other quarter on Romanelli’s side, Rustin’s Marek Seaman gets Unionville’s Sam Elsen in a rematch from last week, won by Seaman. The other finalist figures to be either Garnet’s Desmon Perry or Spring-Ford’s Xavier Cushman, but their opponents, Boyertown’s Jimmy Sinclair and Marple Newtown’s Jimmy Hally, hope otherwise. Maybe the best wrestler in the tourney is Spring-Ford’s Joey Milano, a two-time fourth-place state medalist, and he’s the top seed. Conestoga’s Nick Arbes gets the pleasure of seeing him first. Henderson’s Koh Bauman earned the No. 2 seed and will face Downingtown West’s Mason Hale in a battle of returning regional qualifiers. A Hale has reached regionals seven times since 2013, but Mason has his work cut out for him. Garnet’s Sam DiTrolio is Bauman’s biggest threat to the finals on the bottom half. Strath Haven’s Gabe Federico is a returning state qualifier and is the No. 4 seed, ahead of Haverford’s Jon Harwood, who beat Federico twice this year. The highest returning state medalist is Sun Valley’s Ryan Catka, who took third as a junior. Rustin’s Matt Griffith snuck in as the eighth seed and is Catka’s opener. Kennett freshman John Pardo hopes to get a shot, after a strong start to his career. He faces Boyertown’s Anthony Bauer. The 3-6 matchup is a battle of the breakouts, with No. 3 Jake Allred of Conestoga and Henderson’s Wyatt Hampton. Both have some impressive wins this year, and are hoping to take the next step. Interboro’s Shalom Thomas is the No. 2 seed and he gets crosstown rival, Victor Ninson of Ridley. This could be the Central League’s top weight with Upper Darby’s Julien Laventure and Radnor’s Daetrel Jerome the top two seeds, and Garnet’s Nick Mahoney at No. 5. Laventure is a returning state qualifier and Coatesville’s Dylan McGuire is his first foe. Jerome gets Strath Haven’s Ben Farabough, and the two have split matches this season. On Jerome’s side, West’s Matt Micale kicks off his last postseason against Kennett sophomore, Bailey Shindle, who starts his first. Neither has lost this season. Boyertown’s Robert Terra is Mahoney’s opener. Henderson and Boyertown have a tournament-high nine wrestlers, with each having four seeded in the top four. They seem to be chasing Spring-Ford, however, who, despite having only seven qualifiers, has four No. 1 seeds and two others in the top three. Joining the Rams with seven wrestlers are Garnet Valley, Interboro and Strath Haven. Kennett and Sun Valley have six. There were 28 teams to draw from for the South tournament, but only 23 are represented. The Ches-Mont has 42 of the 104 competitors, while the Central has 34, the Pioneer Athletic Conference has 21 and the Del-Val has seven.