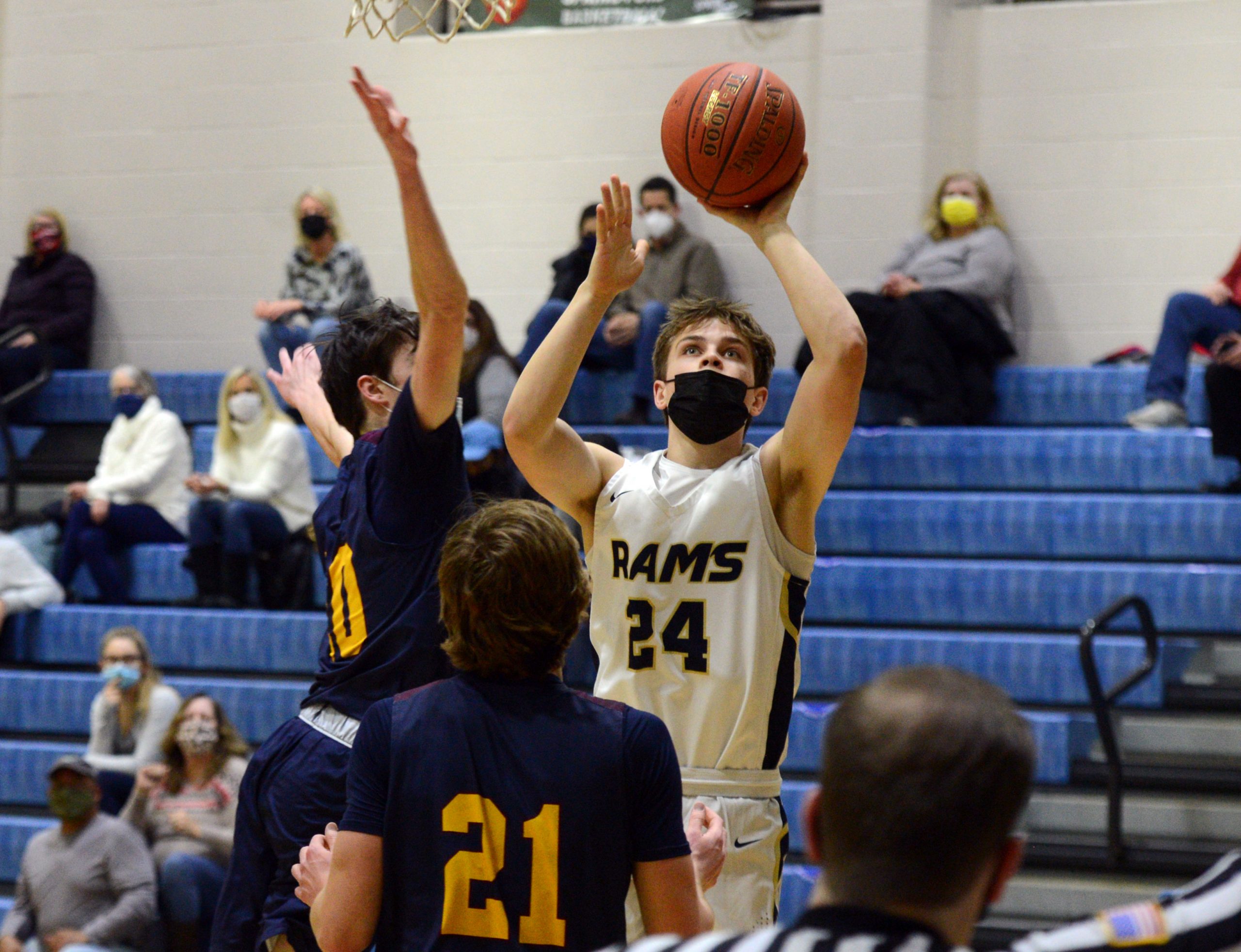 ROYERSFORD >> With the departure of a Methacton core that dominated the league over the past two seasons, parity was supposed to return to the Pioneer Athletic Conference in 2021.

The Golden Panthers continued their roll through the PAC with a 46-41 win over Spring-Ford on Wednesday, pushing their school record start to 9-0.

Senior Justin Green had 13 and senior Luke McCarthy had 12 to lead PJP, while senior Nate Santiago scored 19 for the Rams.

“The best case scenario is we’re 15, 16-0 and that’s where we want to go,” PJP senior Liam Haffey said. “We don’t want to settle for anything less than that. Personally, I wasn’t disappointed with this game, but I think we’re a lot better.” The sharpshooting Golden Panthers came into Wednesday night’s game against Spring-Ford (3-3, 2-2 PAC Liberty) averaging a league-high 63.3 points per game while knocking off opponents by a margin of 26 points per game.

A 41-38 win over Methacton last week in a 2020 PAC championship game rematch was the first game PJP won by single digits this season and the first time it scored fewer than 58 points in a game.

Unselfish PJP possession ends with a pass from Jaden Workman to Luke McCarthy for a 3. pic.twitter.com/8N0ycLlk1B

The Golden Panthers responded with a 6-0 run to regain some breathing room before clutch free throw shooting sealed the game down the stretch. Haffey and junior JP Baron both added seven points for PJP.

“Last year or even my sophomore year, I don’t think we could ever win a game against Methacton or Spring-Ford scoring under 45 points,” Green said. “I think that speaks to how much we’ve grown defensively. But I still think we can get our offense going again.” PJP and Spring-Ford both recently put their seasons on pause due to COVID-19 contact tracing within their programs.

The Golden Panthers went without games from Jan. 29 to Feb. 12 before returning to the court last Friday for the win against Methacton. Following a Jan. 27 win over Perkiomen Valley, Spring-Ford did not play a game until Monday’s 76-49 loss to the Vikings.

PJP’s offense broke free a bit with an 8-0 run at the end of the third quarter before McCarthy knocked down a three on the Golden Panthers’ first possession of the fourth to go up double digits, 35-25.

The Rams held PJP to just two points over the next four minutes to pull within one, 37-36, on a basket by sophomore Alex Lewis. Talley said too many missed opportunities earlier in the contest kept Spring-Ford from pulling off the comeback.

Cole Turner in traffic makes it 19-16 PJP with about three to play. pic.twitter.com/LYBaWIzJHm

Junior Gavin Schauder and Lewis both had six and junior Cole Turner scored five points to follow Santiago for the Rams.

“The effort was there tonight, we just didn’t do the little things to beat a good team like PJP,” Spring-Ford coach Chris Talley said. “Credit to them. They did the little things better. They got loose balls, they shot foul shots better than us. … They came up with timely loose balls and down the stretch that’s the difference in the game.”

At the center of those hustle plays for the Golden Panthers was Haffey, who after serving as a deep reserve season ago has earned himself a key role off the bench this season.

He and Green picked up a handful of blocks each in the first half and found ways to scrap for loose balls to earn extra possessions in a contest where points were hard to come by.

“That’s always just been what I’ve been good at is getting steals, getting deflections, hustling for a loose ball,” Haffey said. “I think that’s just the key for me getting on the floor and getting in a rhythm.” The meeting for District 1 boys basketball seeding is scheduled for March 3, meaning the next two weeks will be jam-packed for both Spring-Ford and PJP after their long pauses.

PJP has five games scheduled through Feb. 26 and a meeting with Phoenixville slated for March 4. Spring-Ford has eight games scheduled in the next 13 days, in which Talley anticipates his team will be able to practice at most twice.

“We’ve had back-to-backs and maybe one time a three-game stretch, but never anything like this,” Talley said. “But PJP’s in the same situation, other teams are too. We just have to go about it, get some rest and grind it out like everyone else.”

Phoenixville, who PJP defeated 59-45 on Jan. 22, is still just a game behind the Golden Panthers in the loss column of the league standings at 6-1.

After two close calls in its past three contests, PJP is hoping to get the offense back clicking on all cylinders like it did before its long layoff.

“I feel like we’ve lost some of that fun but once we get to moving the ball on offense and having fun out there, it’s going to be even more enjoyable,” Green said. “It’s like a spiral effect. When the ball moves everyone just sort of plays better.”

NOTES >> After a breaking a nine-game losing streak to Spring-Ford in 2020 that stretched nine seasons, PJP has now won two straight ‘Battles for RoFo.’ Mercury Roundup (Feb. 16): Boyertown, OJR, Methacton roll to wins on the mat
Spring-Ford’s multi-talented McGill more motivated than ever while honoring late teammate with every step on the mat