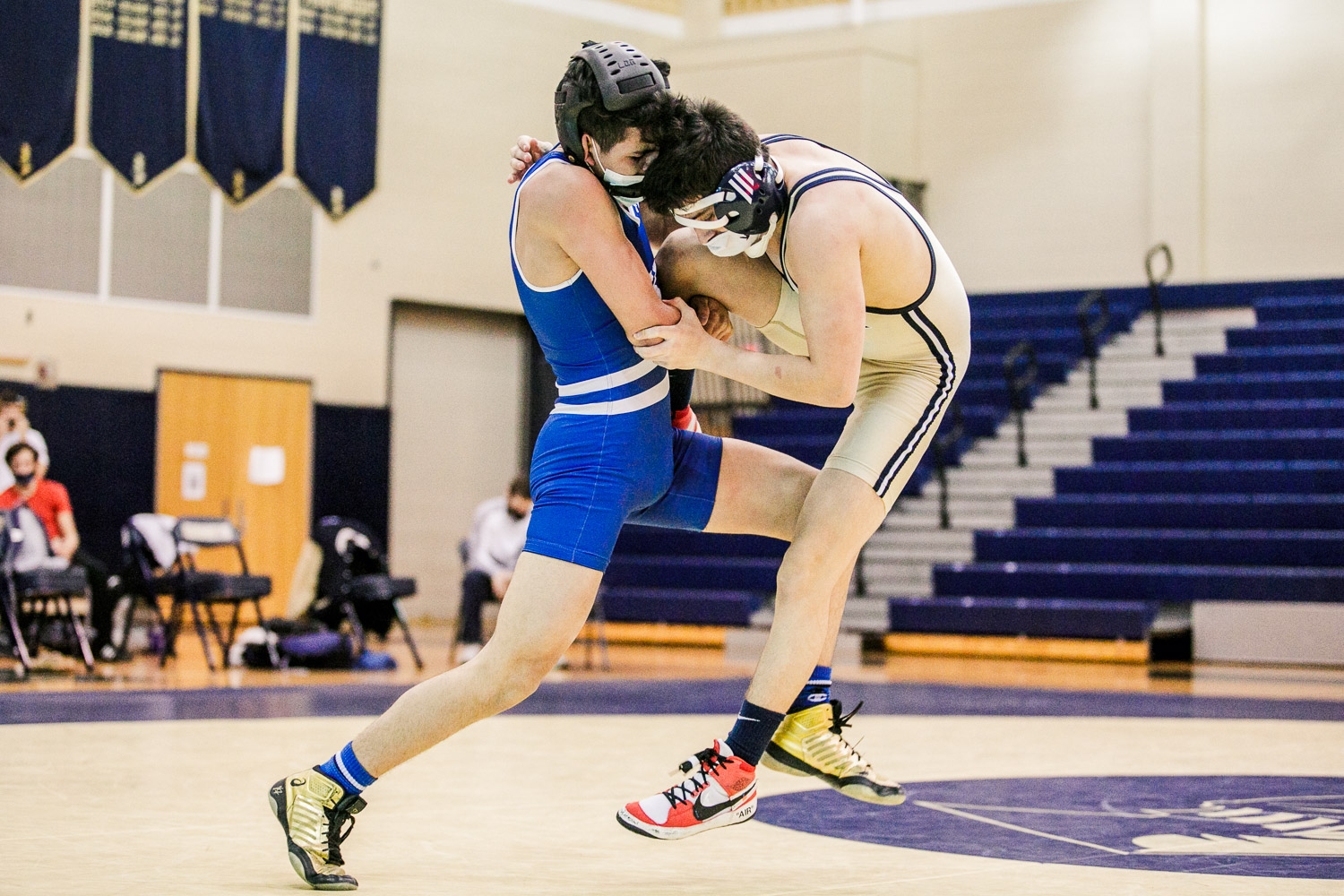 WESTTOWN >> As with everything else surrounding living through a pandemic, Kennett’s Trent Kochersperger had to find a way to make the best of an unfavorable wrestling season.

When it came down to it, something was certainly better than nothing, but for seniors like Kochersperger, an abbreviated regular season, followed by a trimmed down postseason, was a reality that justifiably brought disappointment.

“I’ve been working extremely for this,” Kochersperger said. “At first, I’m not gonna lie, I wasn’t happy about it at all, but I could’ve told myself all the excuses. If you want to be great, you can’t make excuses for yourself. You have to push through it. That’s what gladiators do, they push through the hard stuff.” Wednesday night, Kochersperger led Kennett to its first win over West Chester Rustin since 2007. Helped also by three forfeits from the Golden Knights, the Blue Demons earned a 39-30 win over the hosts.

“Rustin is a really good program, and to pull out a close match is great,” Kennett coach Kevin Reigel said. “It shows we’re on a little upward slope and it’s nice to be competing against the perennial best teams.”

With two pretty evenly matched up lineups, the dual meet also presented an opportunity for individuals to make their cases for postseason selection, which will happen early next week. With only eight wrestlers being picked to each weight class, wins in the swing matches became more important than just the team score.

Kochersperger (138 pounds) and Josh Barlow (152) pinned their opponents, and that duo should be a shoe-in for the postseason. Freshman John Pardo (215) is still making a name for himself in the high school ranks after placing third in the Pennsylvania Junior Wrestling tournament in eighth grade. Against a muscle-bound senior, Matt Griffith, Pardo figured out the lone takedown of the bout and added to his resume with a 3-1 win for Kennett (2-0 American Division, 5-2 overall).

“I’m still one of the smallest kids at my weight class, so I’m trying to beat kids with skill over strength and power,” Pardo said.

Though Rustin (0-2, 3-3) lost the dual, it won five of the nine contested bouts, including a pair of big wins by Charlie Baldesari (145) and Ryan Corp (160), who are fighting for their postseason lives.

Baldesari trailed Paul James Pebly heading into the second, but scored a takedown and eventually cradled him up for the pin. Two matches later, Corp outlasted Josh Kochersperger, scoring five in the third for a 7-4 win. “That was a big win for Charlie,” Rustin coach Tony Finding said. “He was ranked behind Pebly and I didn’t tell him about it, but he must’ve known. … The boys have been wrestling like this could possibly be their last match.”

Marek Seaman (172) continues to impress, with a 7-3 win over Darrale Barrett. Seaman leads Rustin in wins (six) and only he and Chris Yanko (5-0) are undefeated. Yanko has a trip to regionals under his belt, while Seaman is trying to make up for lost time after playing basketball as a freshman. West Chester Rustin’s Marek Seaman closes in on a takedown against Kennett’s Darrale Barrett in a 7-3 win at 172 pounds. (Nate Heckenberger – For MediaNews Group)

Despite the loss, Finding felt like he got out from his team what he wanted.

“The boys wrestled well,” Finding said. “I was pleased with how they performed. We’re progressing forward, not going backwards.”

Rustin closes out the regular season with a dual against Great Valley, Friday, and Unionville, Saturday. Kennett will follow Rustin’s 11 a.m. dual with Unionville with its own at 6:30 p.m., as everyone tries to cram as much improvement before the postseason starts February 20.

“Technique-wise, in such a short season, it’s tough to move kids from incoming freshman to a true sophomore level that you’d want for the postseason,” Reigel said.