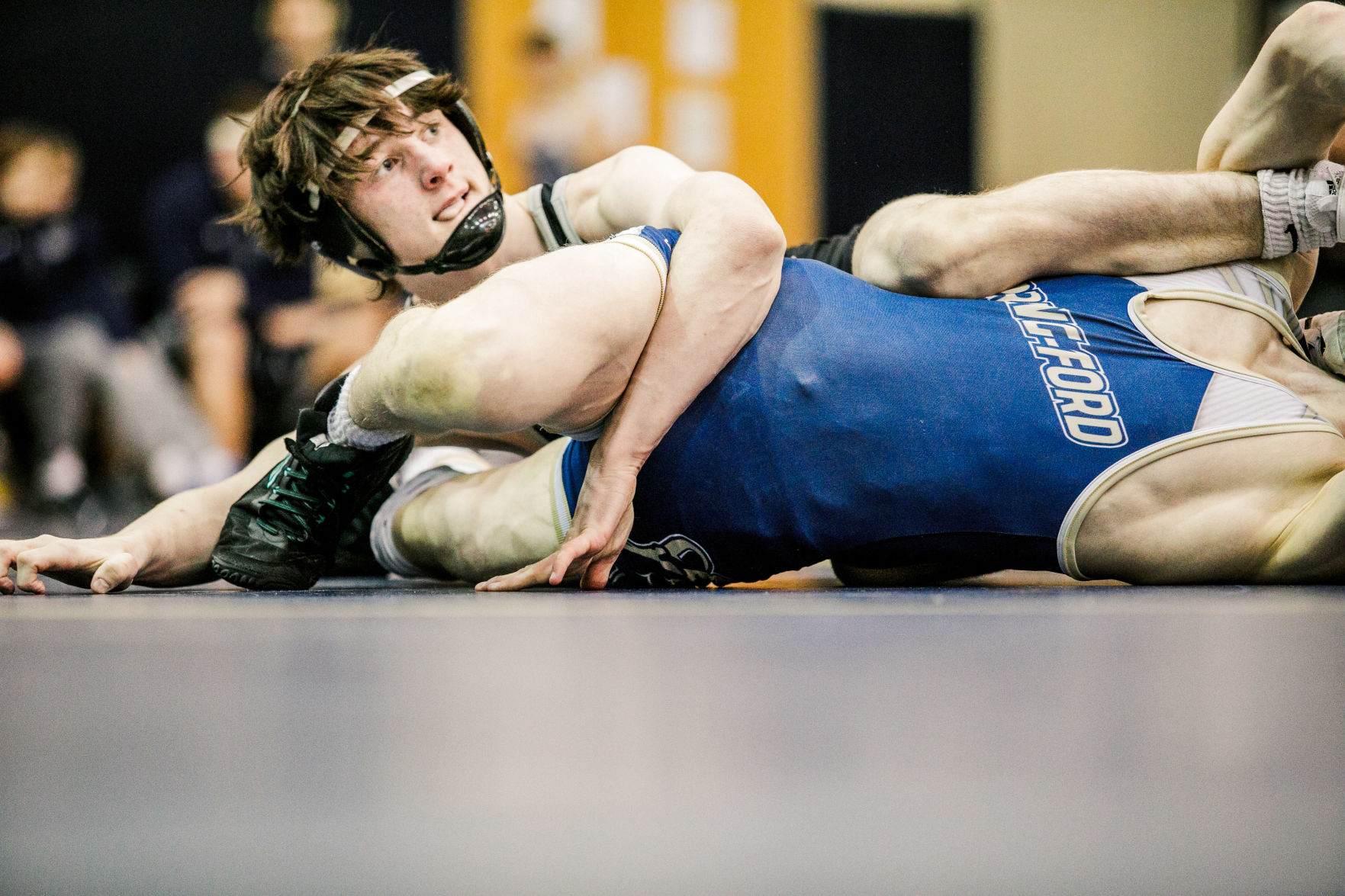 Strath Haven's Chase Barlow, top in this file photo, is glad to be back on the mat and looks to make a third straight trip to the PIAA Class 3A wrestling championships. (Nate Heckenberger/For MediaNews Group)

RIDLEY TWP. — This was a Central League wrestling championship like no other.

The first indication was the format. Instead of going all day with a few breaks in between, the championship meet was split into two sections, with wrestlers in the 106-145 weight classes competing in the morning session and those in the 152 through 285 going at it in the afternoon.

The second was the fans … or lack thereof. For safety reasons, only one parent or guardian per wrestler was allowed in the gym at Ridley High per session. Anyone else had to watch it on a live stream, either from home or in the auditorium. That’s also where the wrestlers from the afternoon session hung out until it was their time to wrestle.

Masks were required at all times, even for the wrestlers, except when they were on the mat. That was optional and most chose not to mask up while wrestling. Social distancing (for non-wrestler attendees) was required, too, although that was not followed as strictly as the mask mandate.

The mats were cleaned several times with a disinfectant spray and mopped during breaks to adhere to the 45-minute rule between matches. Ridley’s maintenance department used four ultraviolet light standards between sessions to further sanitize the arena.

The Central League is the only loop in District 1 to hold a full league-wide tournament in this pandemic-affected season and the wrestlers were grateful.

“It’s awesome,” Garnet Valley junior Matt Ricci said. “A couple of weeks ago we didn’t know if we were going to have a season, so to be able to come in here and wrestle for something is awesome. The Ches-Mont’s not having a league championship so this is something special.”

Most of all, it was a chance to wrestle more than one or two matches in a day. There have been few if any tournaments due to the pandemic and most teams have been limited to a dual meet in the middle of the week and the occasional tri-match on Saturdays.

“It’s good for certain kids who need the competition,” said Strath Haven’s Chase Barlow, who won the 152-pound title, his third league crown, and was named the meet’s Outstanding Wrestler for the second time in his career. “This will be good competition for people looking to go into postseason.”

Barlow is one of those wrestlers with higher aspirations. He’s a two-time state qualifier and is looking to earn a return trip to Hershey and hopefully come away with a medal.

“I got three matches in today,” Barlow said. “I got a good sweat in today. I was working hard. It was good to get that extra match in today.”

Another big change is the league champion was determined. Garnet Valley tallied 184.5 points to claim its fourth straight crown. The Jaguars did not participate in the team tournament last year because they were involved in the PIAA dual meet. They shared the title with Conestoga and Strath Haven last year.

The Jaguars had four league champs in Ricci (120), Griffin Hollingsworth (132), Daniel Husain (145) and Sam DiTrolio (189). For Ricci, it was his second league crown. He won the 106-pound championship as a freshman in 2019. Hollingsworth claimed his third individual championship and moved within one victory of reaching the 100-win plateau in his career. Garnet Valley also had three wrestlers finish second: Frank Reagan (113), CJ Wood (138), and Desmond Perry (172).

“Someone emailed me yesterday and said, ‘Good luck, coach, four’s a dynasty.’ I never looked at it like that, but I like that term.”

The most exciting match of the day was at 126 where Ridley’s Rocco Hartfuss squared off against Conestoga’s Mitch Baker in a match of defending champions. Hartfuss won the 106-pound title last season and Baker captured the 120-pound crown. Hartfuss pulled out a 9-5 victory in overtime.

“It was a little nerve-racking, but I managed to pull it out at the end and that’s all that matters,” Hartfuss said. “He took a shot and I grabbed his arm and flipped him.”

“This was awesome for the kids,” Fantazzi said. “They’ve been working hard and some of the dual meets they go to they just don’t feel like dual meets because there’s no fans in the stands, you have to wear a mask and wait for your teammates on the bench or somewhere else. This was our first real normal wrestling day; a normal tournament, a sporting event and an environment that they’re used to being in and you could see that they felt good about it.”