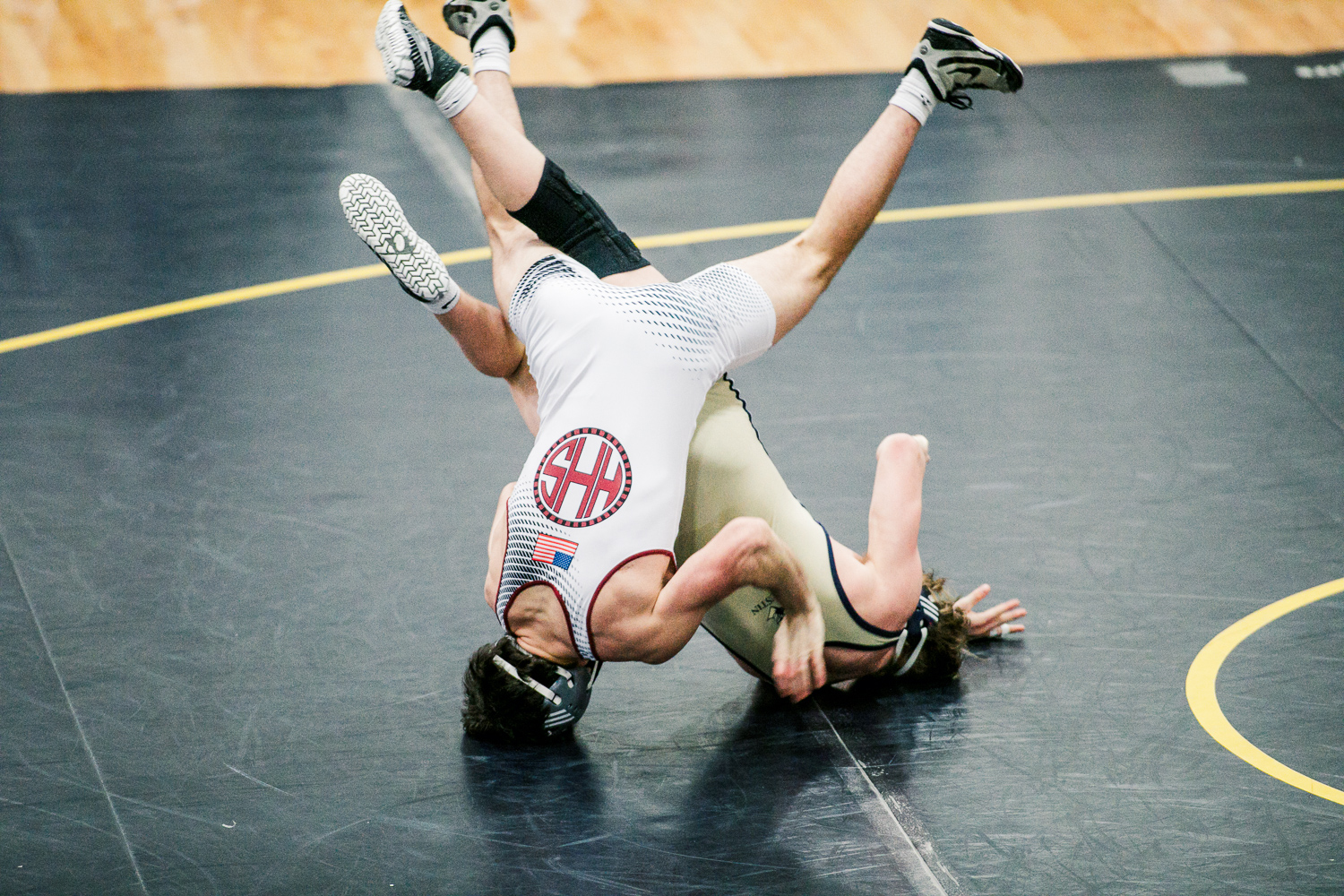 ASTON >> District 1 announced, Friday, the 12-man brackets for the first postseason tournaments were being reduced to eight, sending a jolt of urgency into already short sprint of a regular season.

Saturday, at the Sun Valley quad meet, the changes were felt, with coaches jockeying lineups and wrestlers fighting to make their case for the selection committee that will have an even tougher time come next weekend.

West Chester Henderson made a strong claim for most of its lineup to be considered with a pair of overwhelming wins against West Chester Rustin, 41-20, and Sun Valley, 51-12.

The Warriors (7-0), who swept through their National Division schedule, continued their dominance in the crossover duals.

“Sun Valley is a well-coached, tough team and we knew we’d have our work cut out for us,” Henderson coach Rob Beighley said. “We’ve seen what they’ve done against other teams and I was happy with how we accepted the challenge. I thought we wrestled very well and I thought we were very offensive and very aggressive.” The Vanguards (6-1) blew out Rustin, Wednesday, and did the same against Downingtown West, 43-19, Saturday.

Henderson had an answer for almost anything Sun Valley through at it, most emphatically, by Billy Wilson (126) pounds. Sun Valley’s Shane Holefelter led 6-3 in the first, before shooting in on Wilson again. Wilson sprawled and found a cradle, decking him late in the period.

Days prior, Holefelter majored Rustin’s Jimmy King, who defeated Wilson, 6-4, Saturday, muddying the seeding selections if all three stay at 126.

“These matches always count, but they count even more, now,” Wilson said. “You can’t really have a bad match. You have to be on.” While Warriors like Palmer Delaney (138), Sammy McMonagle (152) and Koh Bauman (189), are already penciled in for their postseason spots, others, like Wilson, need to make an impression.

“There’s definitely some pressure since we’re the big team in the area, but we’re such a close team and we have such good energy, we don’t really get nervous,” English said. “We just wrestle aggressive and wrestle smart and get it done.”

With a pair of wins, McMonagle tied Charlie Grab for third all-time at Henderson, with 128. Rustin (3-2) was the first team to hold the Warriors under 50 points this season, and while the Golden Knights dodged a couple unfriendly matchups to keep potential losses off some resumes, a few guys helped their cause.

Marek Seaman (189) was a 6-2 winner over West’s Mason Hale, a regional qualifier a year ago, to move to 5-0, and that decision, combined with Ryan Corp’s (160) last-second win over Ryan Gallagher was the difference in the dual meet.

“One of the things we told them was about first impressions on the mat,” Rustin coach Tony Finding said. “The first thing you do sets the tone, and Corp set the tone (against West) and (Chris) Yanko followed right after.” For West (1-5), it’s quickly becoming one of those years, with three losses this week.

“I haven’t seen us wrestle this bad in some time,” West coach Brad Breese said. “We showed so little fight. I’m baffled by what’s going on.”

Of the 19 matches actually contested, the Whippets won just four. The highlight of their day was an 8-0 major decision by Dom Findora, who made his debut at 126, over Holefelter. With fewer postseason slots, the season may be over sooner than a few Whippets expected.

“It’s something I’ll have to present to them, now,” Breese said. “Some of them lost their spot in the postseason because of how they wrestled. Some who were on a thin line to begin with have no chance at all. It’s horrible it all went down like that at the last minute, but you can’t do anything about it.”