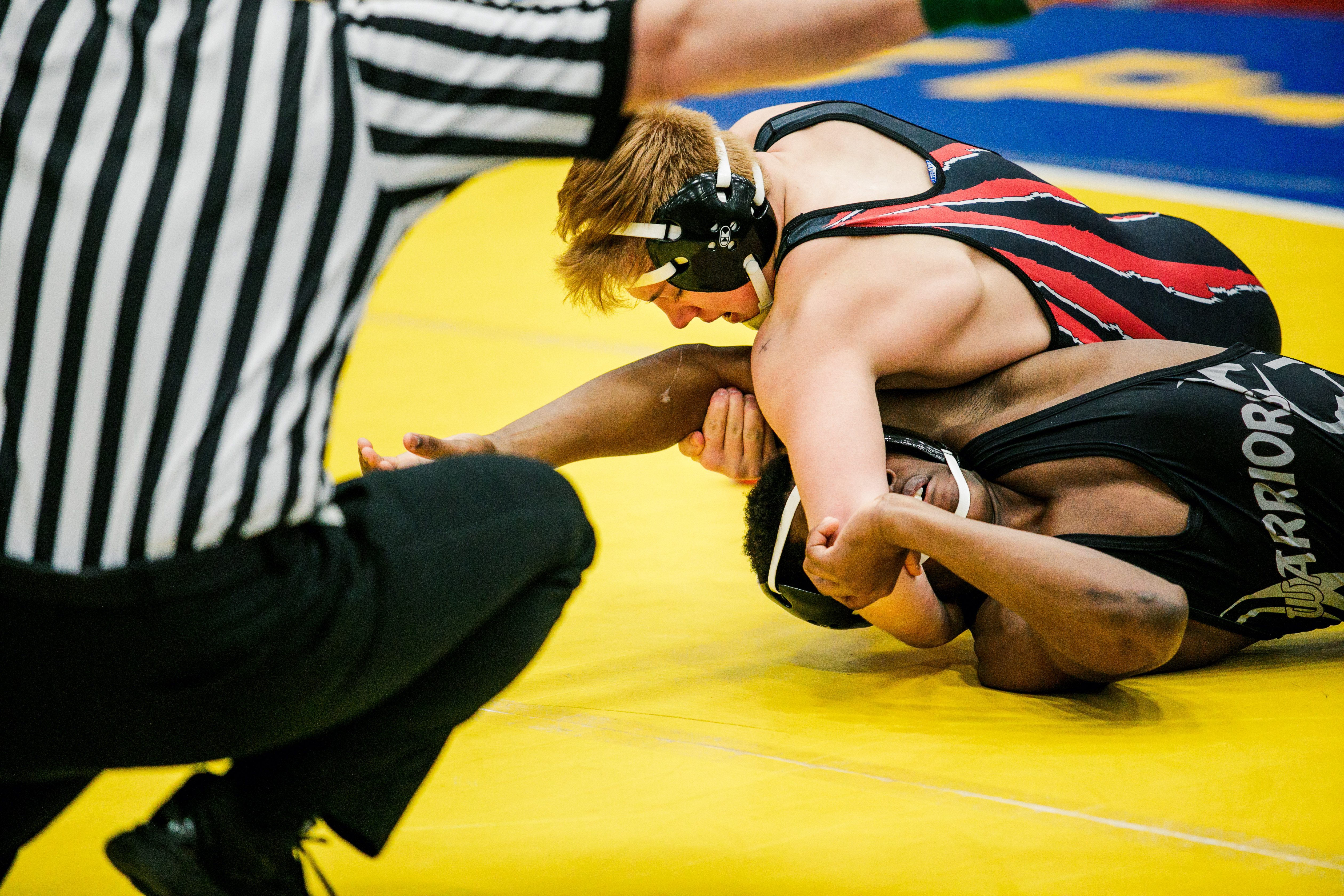 First league wins are even more memorable, particularly those coming against division opponents. Achieving that feat against a quality opponent makes the feat even more significant.

Odds are Tony Haley will long remember Saturday’s match with Owen J. Roberts … for many of the above-mentioned reasons.

The Bears got Haley a “first” in his brief tenure as the program’s head coach Saturday, and in a big way. Their 49-14 roll over host Owen J. Roberts was his first against a Pioneer Athletic Conference Liberty Division opponent, and the biggest highlight of the 2021 season to date — a season that marks Haley’s return to Boyertown after more than a decade of service as its assistant coach, and two stints at the helm of Methacton.

Boyertown (1-1 PAC, 4-1 overall) never trailed after seeing Asher Sigler get its first lead with a pin in the 113-pound opener. It broke open what started out as a close contest through the first four weights, winning eight of the final nine to put away a Roberts unit (1-2, 4-2) that had split previous PAC matches with Spring-Ford Wednesday (41-26 loss) and Pottstown Thursday (68-6 win).

Pinning its way through three of the final four weights, the Bears got the match clincher from Anthony Bauer, whose 1:38 fall at 189 gave them a 34-14 lead with three weights left to contest. Their finishing flourish included by drops from Robert Terra (285) and Gavin Sheridan (106) after Preston Fox edged OJR’s Francis McCoy at 215, 3-2.

Dominic Sheridan broke open the 9-9 tie at 138 by scoring a 38-second pin that was the day’s fastest. Chance Babb followed with a 14-5 major decision at 145, Ryder Gehris added a 5-1 decision of Skylur Davidheiser at 152 and Jimmy Sinclair was awarded a forfeit at 172.

In the early action, the Bears saw Jay Maldonado — he recently joined the area’s career win leader ranks with his 100th victory — decision Matthew Englehardt at 126, 11-5.

Cole Bechtel’s technical fall at 160 was the biggest single-bout points score for Owen J. Sam Gautreau had a 5-2 decision of Luke Heimbach at 120, and Mason Karkoska scored a 2:59 fall at 132.

Spring-Ford 78, Pottstown 0 >> The Rams’ sweep of the understaffed Trojans Saturday saw them score the maximum number of team points, along with all but one pin recorded in the first period of this PAC divisional crossover match.

Anthony Attilio recorded the Rams’ other pin in 2:50. The other eight weights were forfeited by Pottstown.

Methacton 57, Pottsgrove 51 >> The Warriors rallied from a double-digit deficit in the first half of Saturday’s game with the Falcons, riding the statistical performances of several players to victory in this PAC divisional crossover game.

Behind the double-figure scoring of three players, Methacton (5-2) rebounded from a 32-20 deficit behind a double-double from Mairi Smith (14 points, 12 rebounds), 15 points from Nicole Timko, 10 from Cassidy Kropp and 12 boards from Alli Hazlett (nine points). Timko raised her career scoring mark to 976 in the process.

White hit for 15 of her points on baskets from 3-point range. Gabbi Koury kicked in with another 14 in helping Roberts (3-4) build a 51-15 lead heading into the fourth quarter.

Methacton 59, Pottsgrove 26 >> The Warriors came out with a strong second quarter and never looked back on their way to Saturday’s PAC divisional crossover win against the Falcons.

Daniel Boone 56, Twin Valley 36 >> Dalton Cymbalski scored 10 of his career-high 19 points in the fourth quarter Saturday to help the Blazers outrun the Raiders for their first victory of the season.

Phoenixville 53, Pottsgrove 41 >> Zavier Mayo exploded for a season-high 23 points as the Phantoms used a big fourth quarter to pull away from the Falcons in Friday’s Frontier contest.

Without PAC leading guard Mike Memmo and fellow senior guard Will Allain, the Phantoms got a big night out of Mayo as well as contributions from Jackson Kuranda (8), Dallas Maloney (6) and Kade Breisblatt (6) among others.
Zion Dyches and Shawn Majors both scored 17 to lead the way for Pottsgrove, which led 22-18 at halftime and trailed 35-34 entering the final quarter.