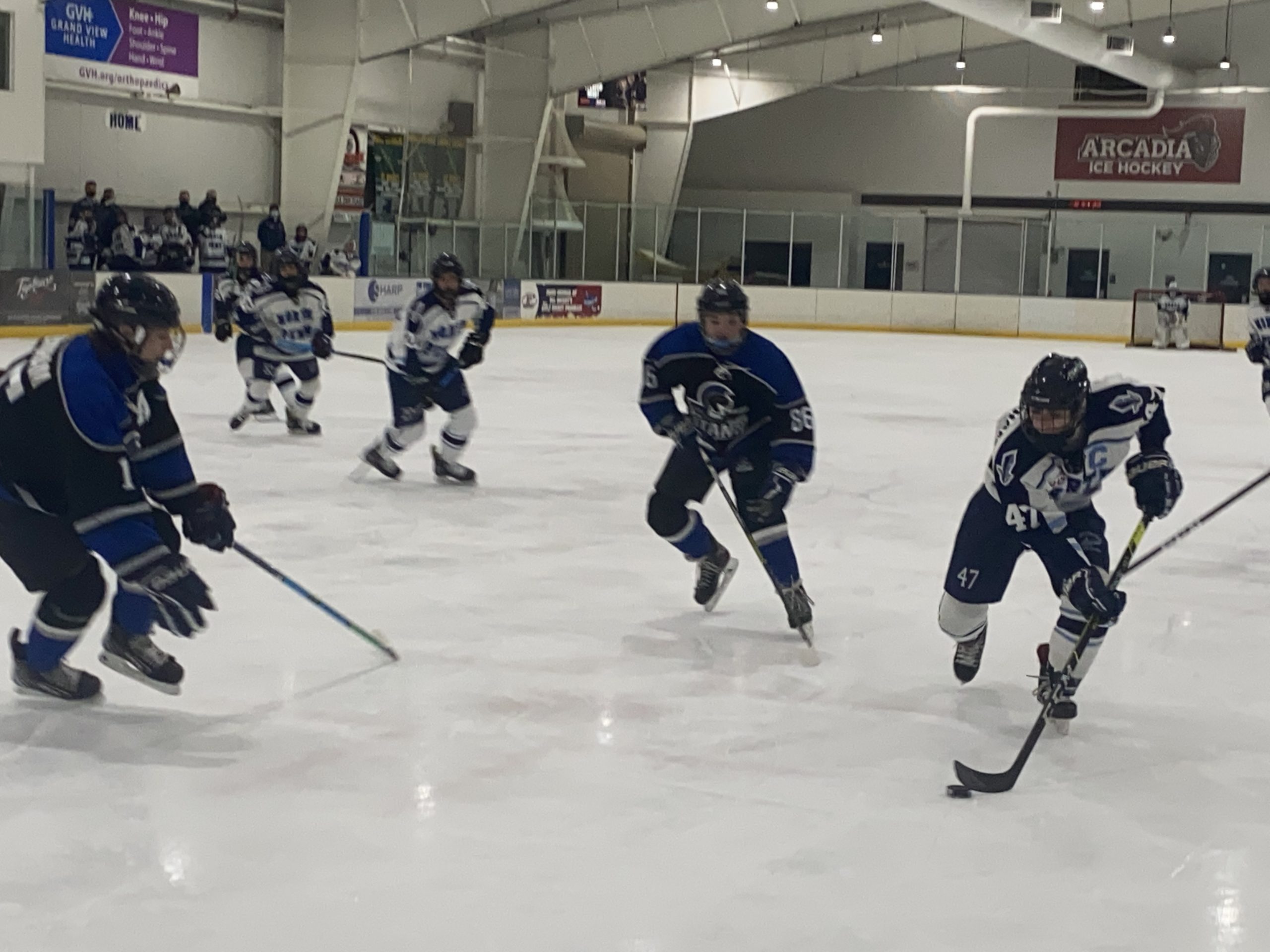 North Penn's Ryan Cunningham (47) skates with the puck into the Central Bucks South zone during their game on Thursday, Feb. 4, 2021. (Mike Cabrey/MediaNews Group)

HATFIELD TWP. >> The opportunity was too good for North Penn ice hockey’s Ryan Cunningham to pass up.

“Open ice in the middle of the ice, kind of came out of nowhere so kind of just decided to take it,” he said. “And actually play against that goalie on my travel team so felt pretty good with a shot there.”

Carrying the puck into the Central Bucks South zone, Cunningham took advantage of the free space given, ripping a shot into the net with 6:28 left in the third period to level the SHSHL Continental Division contest at three goals apiece.

The clutch strike from the Knights captain proved to be the final tally Thursday night at Hatfield Ice as North Penn erasing a two-goal deficit to earn a 3-3 tie with the Titans.

“We’re relying on him for lot this year, with some of the guys that we haven’t had most of the season and he’s done a great job for us,” said Knights coach Kevin Vaitis of Cunningham. “Last night we played CB West, he scored the game-winner last night with about a minute and a half left in the game and then tonight to tie the game up there, just beautiful shot, coming in crossing the blue line.

“So he’s played well for us all season, really his whole varsity career so he’s been a good leader for us so far.”

Jonah Smith’s goal at 11:46 in the second period gave CB South a 3-1 lead at 11:46 but with just 37 seconds left in the period Ryan Kaufhold jump-started the Knights’ comeback – lifting a backhander into the top of the net following a faceoff.

“Definitely really relieved, don’t want to be two goals down going into the last period,” Cunningham said. “So cutting that to one goal and giving us a momentum swing was big.”

Cunningham’s third-period equalizer began with a Zack Cline’s forecheck that forced a turnover along the boards collected by Cunningham, who skated to the center of the ice before entering the Titans zone and getting off a wrister that made it 3-3.

“Caulfield goal’s at the end of the second just really picked us up going into the third period there,” Vaitis said. “And we knew as long as it stayed a one-goal game, that we had a chance to get that next goal and tie it up. And that’s what we were able to do.”

In the five-minute 3-on-3 overtime, Kaufhold got behind the defense but could not get a solid shot off while a try by Cline was denied by the right pad of South goalkeeper Mason Moyer as the teams settled for a point each.

“We definitely want to start breaking out ahead of the .500 mark and pushing back to where we were last year,” Cunningham said. “So just making a good two-goal comeback in the third period was good.”

ICE HOCKEY: @NPIceHockey’s Ryan Kaufhold puts a back-handed shot into the top of the net after a faceoff, pulling the Knights to within 3-2 of CB South with just 37 seconds left 2nd period. pic.twitter.com/l1HNpkWMJV

“We did not have our best performance last week against Pennsbury, they beat us pretty good,” said Vaitis of a 9-2 loss Jan. 28. “And then coming off a game last night where we outplayed CB West, their goalie stood on their head and we were able to win 2-1 but it was close game all the way to the end. It was good to see that we didn’t have no letdown tonight. Sometimes you see games like that and there’s a letdown then the next night.

“This was a game that we came out we started a little slow but once we were able to – Jon Boyles kept us in it there at different period throughout the game and then we were able to capitalize and close the gap.”

“Every day we get to show up to the rink and play is a great day for us,” Vaitis said. “Who I have on a particular day it changes like hours before the game sometimes so we take it one day at a time, one step at a time. I’m hoping that we can continue to make progress and continue playing the games that we’re playing. The kids, they want to be out there and we got to follow all the rules that everybody’s got in place for a reason and we’re doing some good stuff.”

ICE HOCKEY: @NPIceHockey’s Zachery Cline scores off a rebound, the puck just sliding over the goal line to pull the Knights within 2-1 of CB South 15:10 2nd period. pic.twitter.com/sKFbnUiv0B

DJ Lindenmuth struck for Thursday’s opening goal to put CB South up 1-0 at 8:34 in the first period. The Titans needed just 60 seconds to double their advantage, Smith scoring his first of the night at 7:34.

“Just defensive lapses,” Vaitis said. “We got a number of guys that are either first-year full-time varsity players or even we had some guys up from JV as well, guys playing with different guys, this has been a crazy season where we got guys missing every game so we’re trying to build chemistry as best we can and, yeah, we had just some breakdowns in front.

“The thing that I like, that I’m OK with some of those plays is those are all just coachable moments that we can sort of show on tape and look to get better on. As long as we continue to work hard, we’ll continue to fix some of those things and we’ll be where we need to be at the end of the year then.”

Cline cut the Knights’ deficit to 2-1 in the first minute of the second period, poking at a rebound and having the puck slowly slide over the goal line at 15:10.

Smith gave CB South back the two-goal edge at 11:46 but Kaufhold made it 3-2 in the period’s final minute. Joseph Silvotti chipped a faceoff inside the left circle forward to Kaufhold, who drove to the front of the net and with 37 seconds left scored with a backhander.