Smith, Penn Wood get off to high-flying start 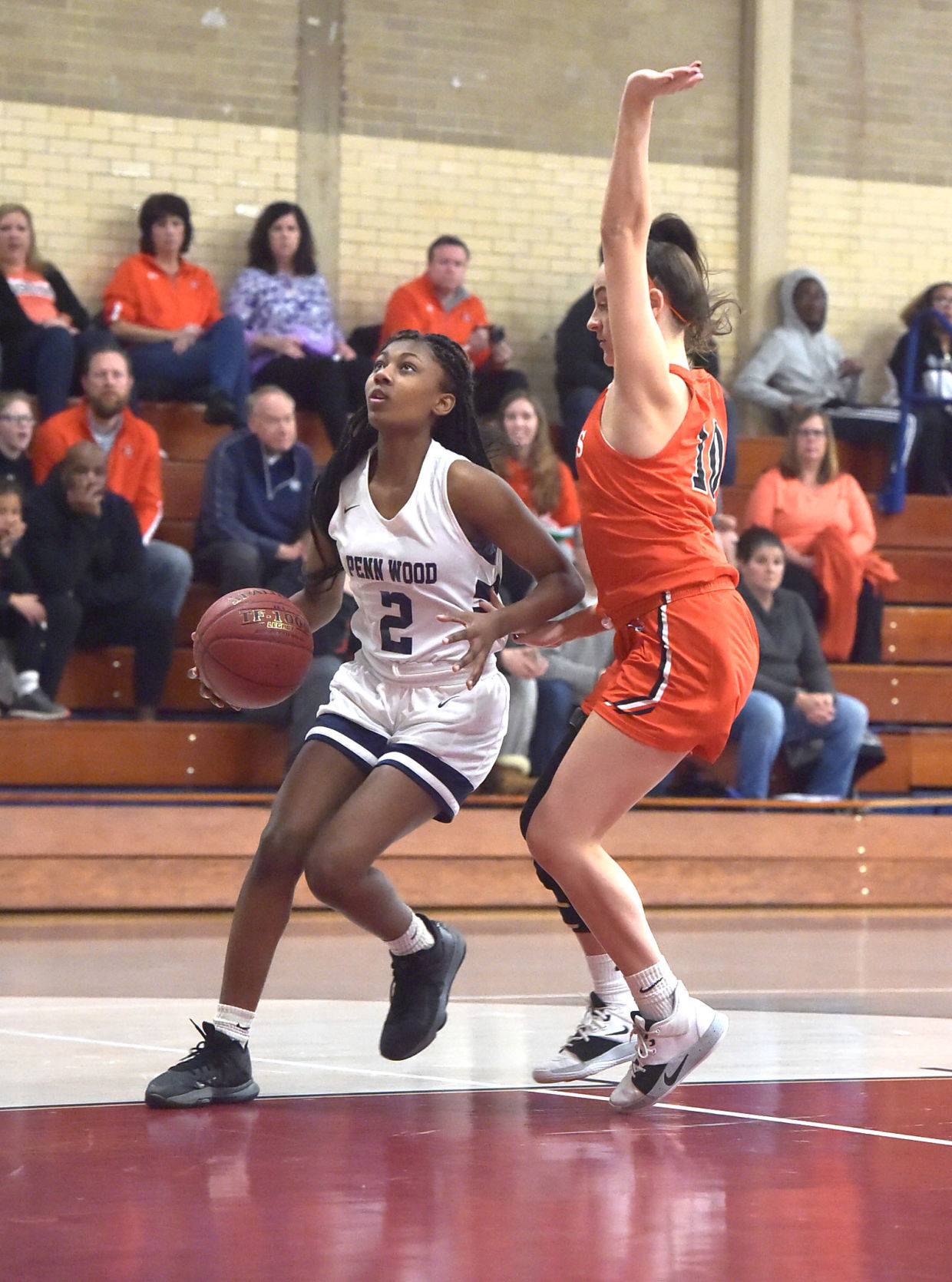 Lashanda Smith of Penn Wood scores against Marple Newtown in a six-overtime district playoff game last year. Smith helped lead the Patriots to a season-opening victory over Interboro on Tuesday.

GLENOLDEN — If you blinked, you might have missed LaShanda Smith picking an opponent’s dribble and streaking the other way for an easy layup or Racquel Curry firing an outlet pass to a wide-open teammate.

Penn Wood takes pride in playing a non-stop, up-tempo style of basketball. The Patriots double-dare their opponent to keep up, and if they can’t, you’re apt to see a score that reads 76-14. That was the score by which the Patriots won their season opener Tuesday at Interboro.

Catch them if you can.

Even in the final seconds, the Patriots kept the foot on the gas.

“When our coaches say we’ve got to slow down, we’re like, ‘Are you serious?'” Smith said. “We just want to run.”

After waiting around for almost a full year, the Patriots went full speed ahead in their 2021 debut.

The Patriots were on cruise control despite missing a few returning players they anticipate to have back in uniform in the coming days. They also won without head coach Mo Boykins, who was attending to a personal matter.

“We wanted to win for her. That feels good,” said the junior Smith, who produced game highs in points (27), assists (seven) and steals (eight). “I feel like the new players we have are picking it up and that translated in this game.”

Jourdan Johnson, who transferred from Constitution of the Philadelphia Public League, was in the starting lineup. She scored 11 points to go with six steals and four assists.

Smith arrived at Penn Wood as a sophomore last year and became one of the top scorers in Delaware County. She’s fit in perfectly with the Patriots’ run-and-gun style.

“I came from Imhotep (Charter),” she said. “I knew (senior) Ashley (Cyrus) and Rocky. I knew most of the people on the team. Some of us were on the same AAU with our assistant coach Qwyn (Durrett). K-Low, that is Kyle Lowry’s AAU team. It’s not anything new for us, we’re just making that connection.”

Curry is a natural guard, but she was forced to play low Tuesday. She finished with 11 points and a game-high eight boards. Overall, the Patriots are a guard-oriented team that will depend on speed, defense and a sleek transition game, especially after losing four-year starter Jada Hutt to graduation. Hutt was a rock inside the paint and often pulled down 15-plus rebounds per game.

“We just have pick it up, all of us,” said the senior Cyrus, who had 11 points, five assists and three steals. “We’ll be good when (sophomore) Xenia (Gillis) comes back. She’s our forward. But we are going to be smaller against a lot of teams.”

Penn Wood and Interboro are two of only three teams in the Del Val League. Academy Park suspended winter sports due to the coronavirus pandemic, and Chichester recently folded its team because of lack of numbers. Penn Wood is the reigning league champion. The Patriots were supposed to tip off their season last week at Chi.

“We found out two days before that we weren’t playing,” Cyrus said.

They’ll take whatever games they can get in this shortened season, and hopefully produce enough wins to qualify for the District 1 Class 5A tournament. Last year the Patriots won a home playoff game for the first time, an unforgettable six-overtime thriller against Marple Newtown.

“I still think about that six overtime game,” Cyrus said.

It was a game the Patriots believe made them a better team.

“We came together,” Curry said. “We had a lot of starters foul out, but our bench really stepped up in the last couple minutes of that game. I think it was important that, as a team, we came together and got that win no matter how long it was.”