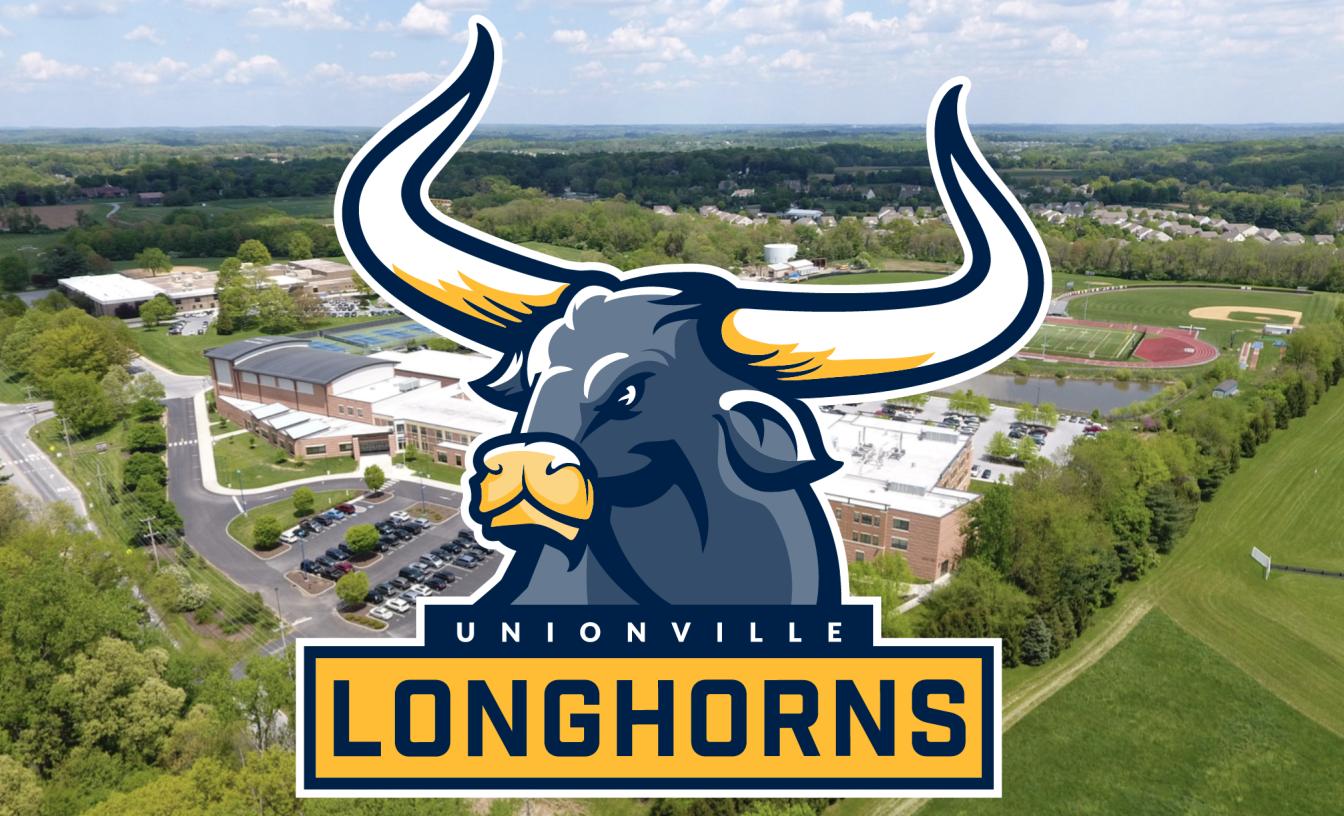 Unionville High School's sports teams will now be known as the "Longhorns" after completing a thorough process and receiving input from all over the community. The new name replaces "Indians," which is how Unionville was known for more than 60 years. The school retains its familiar blue and gold color scheme. (IMAGE COURTESY UNIONVILLE HIGH SCHOOL)

EAST MARLBOROUGH >> When you think of the Longhorns taking to the arena of competition, the mental picture is of burnt orange-clad athletes from the University of Texas.

But now, at least in Chester County, the Longhorns wear blue and gold. Unionville went by “Indians” for more than 60 years. (MNG FILE)

On Monday evening at a board meeting of the Unionville-Chadds Ford School District, it was announced that Unionville High School has adopted

“Longhorns” as its new nickname and mascot.

It officially replaces the previous nickname — the Indians — which was deemed too pejorative, much in the way that the Redskins moniker was recently dropped by Washington’s NFL franchise.

It officially puts an end to the association between the school’s athletic teams and the “Indians,” which was adopted in 1954 as a reference to the Lenape Indians who once inhabited the area through mid-1750s. It was used proudly for more than 60 years before being phased out, starting about five years ago.

In late August, the school board voted to retire the mascot, and a 38-member committee was assembled to come up with a replacement. It included students, teachers, staff, alumni and community members, who met weekly.

“Changing the mascot was an emotional topic for folks, and people care,” said Unionville Athletic Director Pat Crater. “There are certain people in the community who are deeply connected with the school and have a lot of good memories of the previous mascot.

“But on the other side there was a lot of support for change, looking for something that is more inclusive. You see it all over the country with changes in mascots like the Washington Redskins.”

Crater called it a “thoughtful process and we listened to all stakeholders.” The committee initially sent out a survey to all students and staff members asking for suggestions. Unionville football coach Pat Clark was on the committee that helped choose the new name. “We have some great young people here who kind of spearheaded the conversation,” Clark said.  “We can look at making this positive change and still include our alumni and recognize how important they are to our community.”

“We have some great young people here who kind of spearheaded the conversation,” said Unionville football coach Pat Clark, who was on the committee. “We can look at making this positive change and still include our alumni and recognize how important they are to our community.”

Following several rounds of voting, the committee settled on two finalists: the Longhorns and the Stampede. The school’s debate team even considered the two options before it was put to a vote, with students from grades eight through 12 making the final decision.

“We wanted something gender neutral that connected to this community,” Crater said. “And something unique, but not obscure. We learned there are no local high schools that are also the Longhorns.”

While there is no definitive list of Pennsylvania high school nicknames, it appears that there are no other “Longhorns” among the more than 1,000 high schools in the state.

According to Clark, the local connection goes back to the Buck and Doe Run Valley Farms — the King Ranch — that was previously a working cattle ranch in the area.

“There was always a herd of longhorns kept there and much of it is now a nature preserve that covers thousands of acres,” he explained.

Crater pointed out that longhorns are considered a lead steer that is highly adaptable, which was a nod to the Unionville student population.

“We learned that a longhorn is like a fingerprint in that their horns, their coloring and their personalities are all different,” he added. “We thought that was a nice way to celebrate the diversity of our students.”

It also makes sense from a branding perspective as the ‘U’ shape of the longhorn works well with the Unionville ‘U.’

“As a school, we really haven’t been able to use our mascot for the last five-to-six years,” Clark pointed out.

“I’ve been here a long time and there is a tremendous sense of community pride. I’ve got brothers and cousins that have all come through our sports programs, and the old mascot means something to them. But there is also growth in our community. The people who were Unionville Indians can be proud of all they accomplished.”

According to Evanko, who was a member of Unionville’s state champion girls’ golf team, there will be a contest to name the new mascot. She also said that Student Council is organizing a clothing drive to encourage the community to donate their clothing with the old Unionville logo.

“We are going to change out clothing and work on getting everybody in the building a new T-shirt,” Clark said.

“It’s so we can give back to the community and encourage everyone to embrace our new logo,” Evanko added.

Kennett Square’s Janton hopes his love for swimming can lead him to the Olympics
In evening of firsts, Unionville stages comeback to edge Rustin